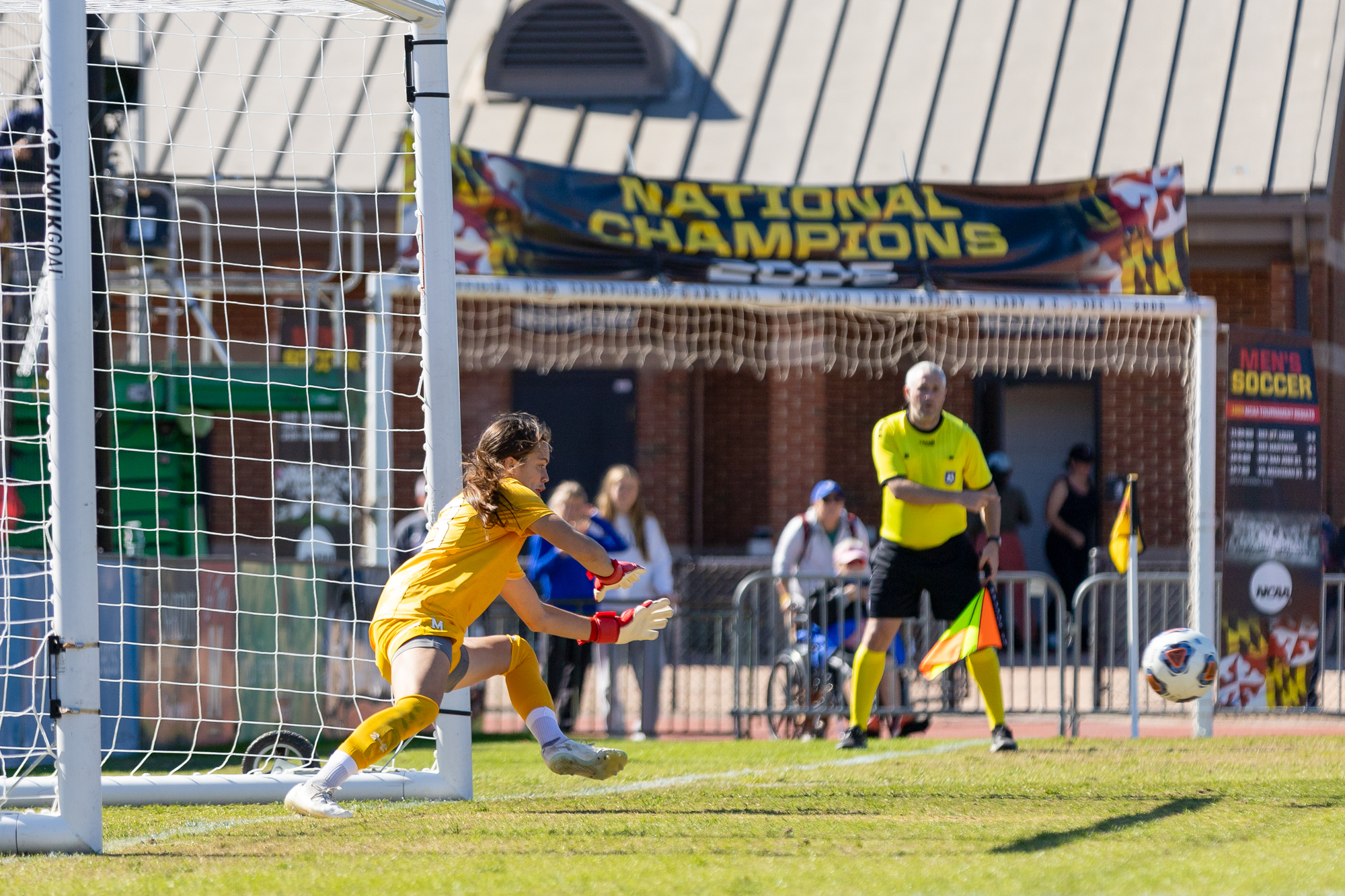 Madeline Smith dives for a save during Maryland women’s soccer's 2-0 loss to Penn State on Oct. 9, 2022. (Riley Sims/The Diamondback)

Maryland women’s soccer’s 2-0 loss against Penn State Sunday was the Terps’ fifth straight defeat — continuing a losing streak that has lasted since a win against Michigan in its Big Ten-opener.

Despite the result, Maryland can walk away with positives from the matchup. The Nittany Lions’ two goals proved to be the lowest goal tally Penn State has put up in the last three matchups between the two programs. The Terps also outshot Penn State, 12-8.

“I was proud of their fight. I was proud that they outshot a very talented Penn State team, and I don’t know too many teams that have outshot Penn State,” coach Meghan Ryan Nemzer said. “It’s razor-thin differences right now, it’s details and habits that we need to get better at.”

Maryland’s defense improved from its 4-0 drubbing against Michigan State, where they faced a total of 19 shots with 11 of them requiring a response from Emory Wegener in goal. Against Penn State, Maryland faced fewer shots at just eight, but all efforts from the Nittany Lions were on target. “We talk about limiting the possibilities for teams to score against us and capitalizing on our opportunities, so we got to be better than that as a whole from start to finish,” Nemzer said.

Senior Madeline Smith made her return to the goal and put up an impressive six saves — one of which was a penalty kick  that kept Maryland in the game less than two minutes into the second half. It was Smith’s first start since the 3-2 defeat to Illinois in September.

But while the loss was still a step forward in some ways, Sunday’s result placed Maryland in dangerous territory. The Terps fell from 10th to 13th in Big Ten conference standings, only ranking above Indiana and hurting their chances at a run in the Big Ten tournament. The top eight teams in the Big Ten qualify for the conference tournament.

With just four games to play, Maryland needs a late turnaround to reach the quarterfinals and eventually be one of the four teams traveling to Columbus, Ohio.

Maryland’s most important fixtures will come against Ohio State, Minnesota and Purdue. Purdue currently sits right above Maryland at 12th in Big Ten rankings, while Minnesota sits in the final spot for the Big Ten tournament at 8th.

Maryland travels to Columbus, Ohio, to face No. 20 Ohio State next. Like Penn State, the Buckeyes’ offense is averaging about 1.8 goals per game this season after scoring nine goals in their last three matchups. Ohio State is also on a five-game unbeaten run.

The Terps will be without one of their key players against Ohio State. Malikae Dayes, who picked up her fifth yellow card of the season against the Nittany Lions, is suspended for the matchup. Maryland is currently the most frequently carded team in the Big Ten with 21, and the only team with more than 20 cards.

Despite Dayes’ suspension, Nemzer embraces the situation with a positive outlook.

“When you lose a player like [Dayes], it’s not good, but I’m confident that other players will step up for her,” Nemzer said. “Once again it’s another opportunity for her teammates to step up and see who wants that role for Ohio State.”