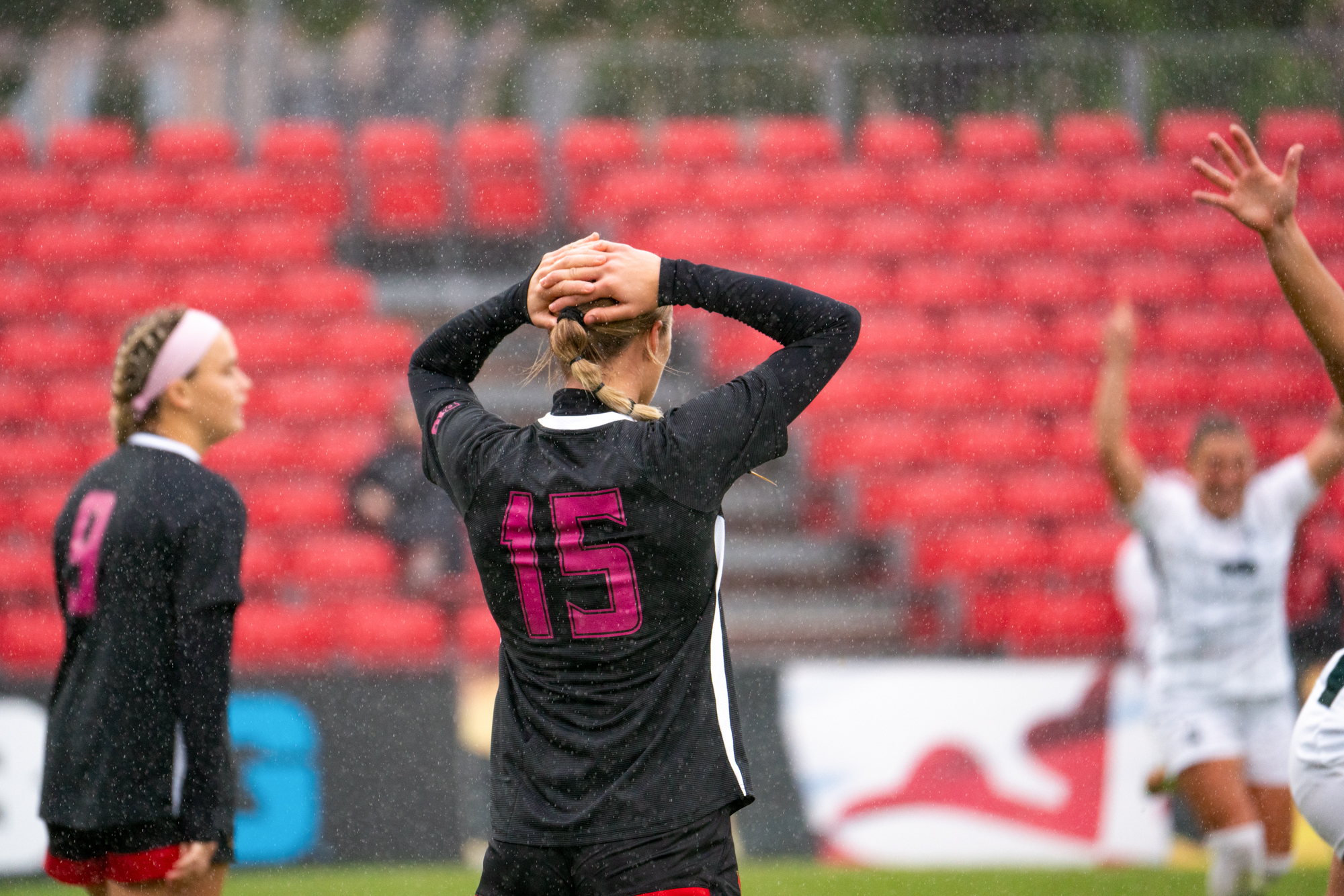 Amanda Schafer stands with her hands over her head in Maryland women’s soccer’s 4-0 loss to Michigan State on Oct. 2, 2022. (Eric Robinson/The Diamondback)

Ohio State won the ball near the halfway line in what appeared to be a non-threatening position for the Terps and quickly moved the ball down the right side before finding senior forward Emma Sears.

Sears took an extra touch before she unleashed an effort that initially looked like a botched cross 31 seconds into the match but found the back of the net instead.

The goal might have felt unlucky, but the No. 20 Buckeyes soon proved their firepower had nothing to do with good fortune — trouncing the Terps 7-0 in Maryland’s worst defeat so far this year.

The Terps were without graduate defender Malikae Dayes in Columbus due to a yellow card suspension, forcing head coach Meghan Ryan Nemzer and her coaching staff into a few changes.

Maryland opened the game with Tahirah Turnage and Halle Johnson to start in the place of the suspended Dayes. Amanda Schafer and Zora Jackson completed the Maryland backline with goalkeeper Emory Wegener returning to the starting lineup after Maddie Smith started in the weekend’s matchup against Penn State.

After their opening tally, the Buckeyes tacked on two more within five minutes to up the score to 3-0.

Ohio State tacked on two more before ending the first half. Maddie Lowe drove toward the heart of the Maryland defense before finding Kayla Fisher, who took one touch before getting sandwiched between Schafer and Turnage.

The referee deemed Maryland’s defensive effort a foul and awarded the Buckeyes a penalty.

Wegener almost saved the penalty taken but instead Kailyn Dudukovich found the bottom corner for a goal.

The goalkeeper faced another daunting Buckeye penalty just ten minutes later when Dudukovich found goalscorer Kayla Fisher in behind the Maryland backline. Fisher took an extra touch before being taken down by Zora Jackson.

Dudukovich lined the ball up at the penalty spot again before cooly placing her effort in the same corner for another goal.

At the end of the first half, Ohio State had 12 shots with eight on target while Maryland struggled to create valuable offensive chances with just two on target. Wegener was replaced by Smith after allowing five goals and making three saves.

Maryland appeared to settle in, only allowing one shot after the 22nd minute. They kicked off the second half well, racking up two corners and two shots — only one of which required an Ohio State save.

But the Terps’ strong start to the second half didn’t last long as Dudukovich earned a hat trick at the 59th minute.

Just under thirty seconds later, the Buckeyes got their seventh of the night after a well-struck curling effort found Maryland’s top right corner of the net and left Smith helpless.

Ohio State’s offense finished the game with 24 shots and 15 on target while Maryland had just eight shots and three on target.