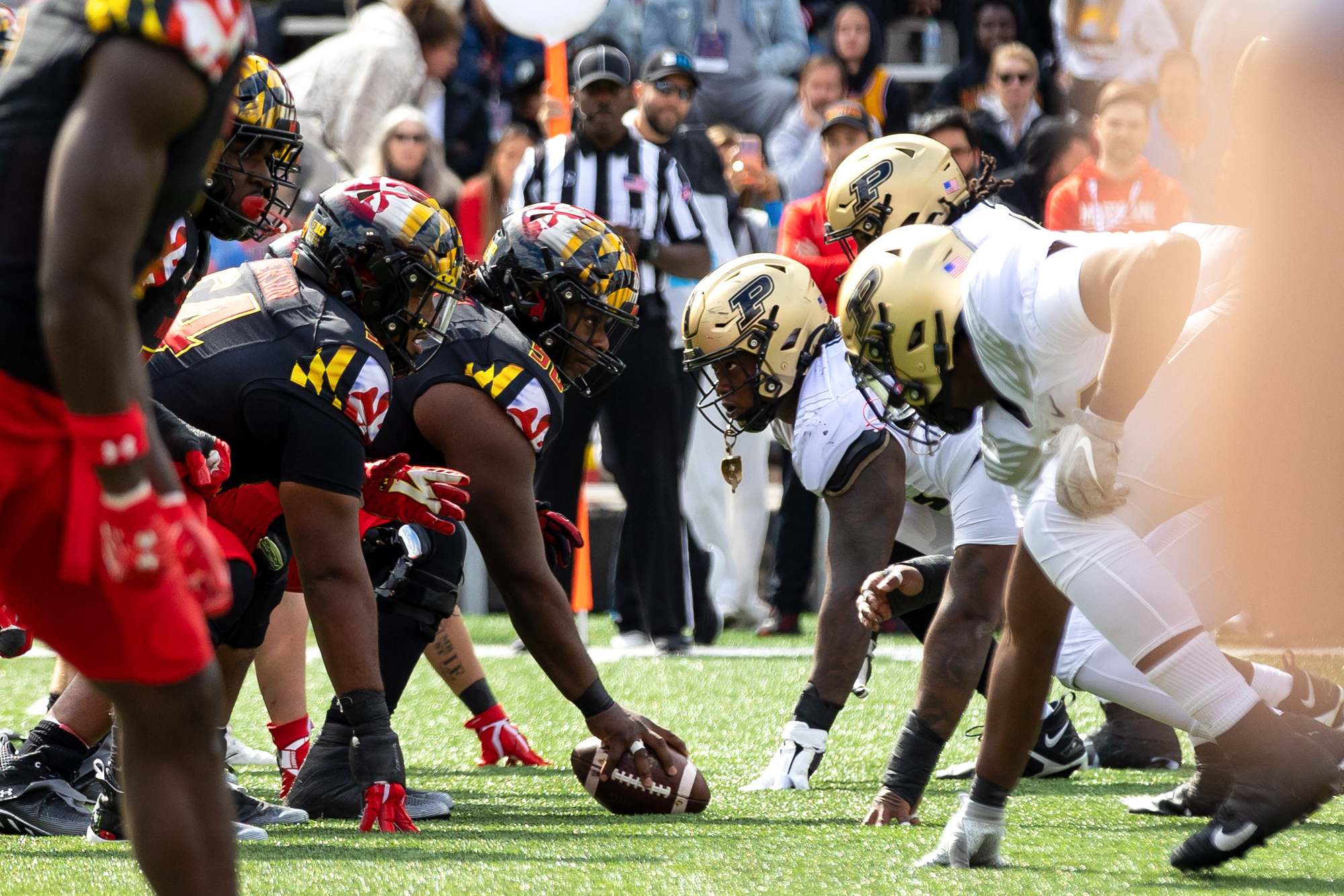 The day before its games, Maryland football’s offensive line meets to review its assignments before they step onto the field — making sure they understand what to do based on the opponent’s defensive front and the offense’s play call.

Johari Branch’s voice can be heard throughout those meetings. The Terps’ starting center is required to know his own duties and those of his teammates.

The senior made the switch from guard to center in the offseason, a transition that heaped more on- and off-field responsibility onto his plate. Branch embraced the challenge with hours of summer work, solidifying himself at the heart of Maryland’s offensive line.

He came into the process never having played center in college — his experience at the position was limited to high school games and practices at Independence Community College.

But he and Terps’ offensive line coach Brian Braswell came up with the idea in the spring. Braswell thought having experience at guard and center would bolster Branch’s chances to play at the next level.

When Maryland lined up for its Red-White spring game, Branch walked onto the field as the red team’s starting center.

“Once I [got reps at center] I felt like this was the position for me,” he said.

While he called himself shy, Branch knew playing center would require him to be vocal. That made him initially hesitant to take on the new role, but he’s grown into the authority figure in the offensive line room.

“He’s kind of the bully of the group,” coach Mike Locksley said. “He doesn’t take anybody’s stuff, he will fight you and really get after people over the course of the game. Not just the other team but if he doesn’t feel his teammates are holding up their end of the bargain, he’s not afraid to step out and become one of those leaders we’ve been trying to develop.”

Branch said being a leader is natural as part of the center position, one he called “the quarterback of the offensive line.” His energy sets the tone for the rest of the group.

“I like that role,” he said. “I’m taking pride in that role, and I’m just trying to get better at that role every day.”

When the Terps’ offense approaches the line of scrimmage, Branch is tasked with identifying the defense’s middle linebacker. Once he’s done that and reads his pre-snap indicators, he sets the protection depending on the number of blockers Maryland has staying in on the play.

The offensive line moves according to what he says — particularly on blitzes when he gets Maryland’s blockers in positions to withstand extra rushers.

Spencer Anderson, who lines up next to Branch on most plays as the right guard, feels his linemate is doing a good job controlling the offense and its tempo.

That understanding of the offense came with a lot of work. The Terps had benchmarks they needed Branch to clear that focused on eliminating bad snaps and knowing everyone’s assignment on the offensive line.

Branch stayed in College Park, a place he said “kind of feels like home,” throughout the summer. He woke up and participated in the team’s workouts, an online golf course and study hall all before noon.

[Corey Dyches has developed into a valuable weapon for Maryland football]

From 12 p.m. to 7 p.m., he stayed in the facility going over plays and practicing his snaps before heading to treatment and recovery. Maryland’s coaches were often on recruiting trips, so Branch spent much of his time with the team’s graduate assistants to understand the intricacies of the playbook.

Late in the summer when the Terps’ incoming freshman class arrived on the campus, many of them came to Branch for questions they had about the playbooks.

“I think they did that because they knew … I understood the playbook’s ins and outs,” he said.

Another player who has to know every players’ role on every play is the one Branch protects: Taulia Tagovailoa.

The two’s partnership flourished in Maryland’s loss to Michigan. Branch highlighted that game as one where he felt prepared to account for any blitzes.

Tagovailoa shredded whatever Michigan threw at him, completing six of eight passes for 114 yards and wasn’t sacked.

“Johari did an amazing job of [identifying the middle linebacker] and knowing where to slide,” Tagovailoa said the Tuesday after the Michigan game.

Branch also received praise from left tackle Jaelyn Duncan, who remarked that it took a great deal of intelligence to make the calls the center does. He praised him for thoroughly learning the playbook and leading the offensive line.

Those compliments aren’t limited to Branch’s teammates and coaches. He said a couple of times after the Terps’ games, an opposing defensive lineman has come up to him to give him credit for his play.

“That’s good, especially with this being my first year playing the position,” Branch said.