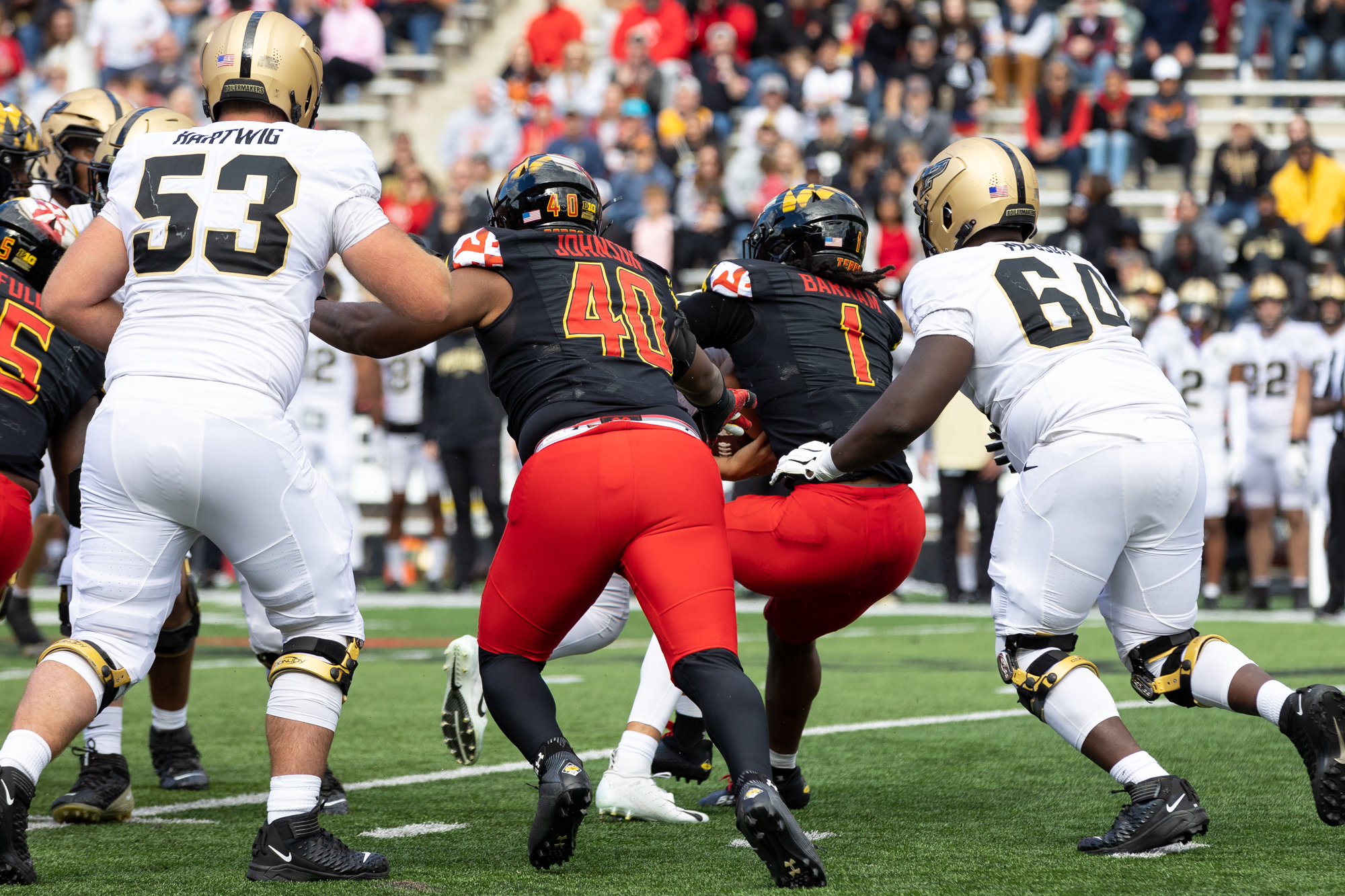 When Mike Locksley speaks to freshman Jaishawn Barham, he typically sees an expressionless face staring back at him.

“Jaishawn is like a robot,” Locksley said at a press conference Tuesday. “I don’t even think he has emotions, like if you ever see him he will deadpan face you.”

Maryland football’s starting linebacker is notoriously quiet, according to Locksley and multiple teammates. But while his demeanor off of the field is typically reserved, his play in the beginning of Maryland football’s season has been anything but timid.

The freshman continued his strong defensive play during the Terps’ 31-29 loss to Purdue Saturday, wreaking havoc in the Boilermakers’ backfield and creating impact plays for a Maryland defense that forced three second-half turnovers.

Barham’s five-tackle, two-sack day — which included a forced fumble in the second half — culminated in a Big Ten co-freshman of the week nomination Monday. Through six games, he leads the Terps in tackles, sacks and tackles for loss.

[Corey Dyches has developed into a valuable weapon for Maryland football]

“His first step quickness and his ability to, as we say, ‘get skinny’ on big tackles, it becomes kind of a matchup issue,” Locksley said. “This guy plays the game the old school way, he loves attacking, getting to the football.”

As soon as Jakorian Bennett saw Barham step onto the field and practice during fall camp, the defensive back said he knew the freshman was “going to be special.”

Barham’s 6-foot-3 frame, complemented by his speed, quickly turned heads as the Terps prepared for the 2022 season. Bennett wasn’t shocked when he saw Barham immediately make an impact in College Park once the year commenced.

“I always [saw] flashes of him, especially during the workouts because he was always fast, strong, athletically gifted,” Bennett said. “I did kind of expect those things from him.”

“The lights aren’t too big, he doesn’t get overly excited,” Locksley said. “He’s really, really consistent with his habits and behaviors.”

Locksley had a decision to make in the fourth quarter of Saturday’s bout against the Boilermakers.

With the game tied at 17 in the opening moments of the fourth quarter, a Taulia Tagovailoa completion to Corey Dyches brought up a fourth and three at the Purdue 34-yard line.

As the final decision maker for the Terps, Locksley could either keep his offense out on the field in hopes of extending the drive or trot out kicker Chad Ryland to attempt a 52-yard field goal.

Standing beside him was football operations coordinator Matt Konapelsky, who held an “analytics book” that gives the team advice in specific game scenarios.

The analytics said to go for the fourth down, Locksley said. But he chose the latter.

“I got a good kicker, and I used the human element part of it,” Locksley said.

Ryland pushed his kick wide, and the Terps were unable to take a late lead. But while Locksley’s decision strayed from the analytics play, he defended his decision.

“You have to use the human element, in-game decision making,” Locksley said at Tuesday’s press conference. “[Analytics] is definitely a great tool, but I don’t ever think I’ll ever be able to come in and stand in front of you guys and say, ‘Well, the analytics told me to do this,’ and you guys not just get after me for it.”