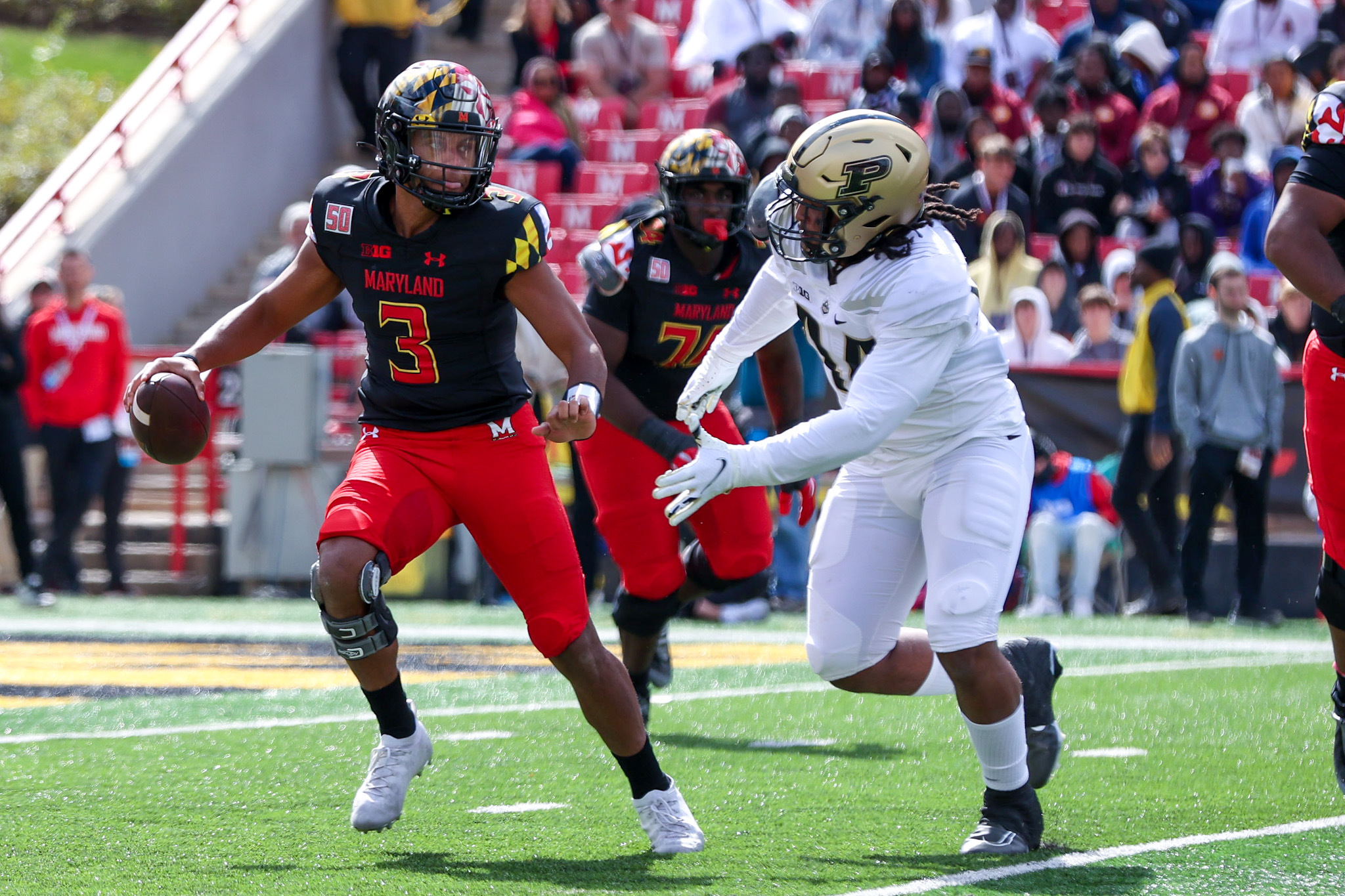 The crowd groaned as a black-and-white striped shirt appeared on the Jumbotron.

Maryland football had just recorded an improbable two-point conversion against Purdue, with quarterback Taulia Tagovailoa scampering to his right and finding Rakim Jarrett hiding near the back of the end zone.

But an ineligible offensive lineman downfield negated the score and sent Maryland back to the seven-yard line to try again.

Tagovailoa’s pass sailed too high for Jeshaun Jones, leaving the Terps’ quarterback clutching his facemask in agony walking off the field and the remaining fans jeering at the refs in dismay.

An ensuing onside kick landed in the hands of the visiting Boilermakers, who defeated the Terps 31-29. The loss spoiled a chance for the program to get to 5-1 for the first time since 2013.

“It sucks losing at home,” Tagovailoa said. He was forced to improvise on the two point conversion after the route to Rakim Jarrett was “dead”, he said

“Just trying to scramble to try and create … Jones did a good job of running the back end line. I just threw it too high for him.”

Down eight points, the Terps marched 68 yards in four plays to bring them within two, scoring on tight end Corey Dyches’ second touchdown of the game. The first came off a 68-yard catch and run where he powered through a Purdue defender.

But those scores wouldn’t be enough, as the failed two-point conversion let Purdue salt the game away. The Boilermakers scored touchdowns on their last two drives.

The first came after Maryland scored with under eight minutes left. Kicker Chad Ryland’s extra point was blocked, only giving the Terps a six-point advantage that was summarily wiped out by a Purdue touchdown that put the Boilermakers up by one.

The second score let them race up to an eight-point advantage that the Terps couldn’t overcome.

The Terps found little consistency in the loss. Their offense found the occasional big play but little offensive rhythm or sustained drives while its defense forced turnovers but consistently got gashed for chunks of passing yardage.

Those penalties combined with five Purdue sacks consistently forced the Terps into third and longs, leading them just six conversions on 15 attempts.

“Not good enough,” Locksley said about that figure. “When we’re first and ten and we get one-yard or a penalty … we’re not a very good offense in those situations and that affects everything.”

The defense forced three turnovers on three straight drives — chances the offense did nothing with — but also allowed 360 passing yards and 14 fourth-quarter points. Tight end Payne Durham rumbled for 56 yards late in the fourth quarter to set up Purdue’s late touchdown, a play Locksley called a communication error.

Maryland’s defense had kept each of its five opponents under 30 points this year, an achievement they couldn’t recreate against Purdue.

Despite its imperfect play, the defense did thrive in certain moments. On the play after a 32-yard catch and run that featured multiple Maryland missed tackles, Purdue tried to give the ball to receiver Charlie Jones.

Jones, who entered the game leading the Big Ten in receiving yards and touchdowns, took a touch pass and sprinted to the outside — trying to turn a corner that didn’t exist. Durell Nchami kept himself outside the widest Purdue blocker, forcing Jones out of bounds for a four-yard loss.

The Terps limited Jones to just 15 receiving yards and no touchdowns — his least productive performance of the year.

A play later, Nchami came screaming off the edge to blast an unsuspecting O’Connell. The senior linebacker’s right hand made contact with the ball and knocked it free from the quarterback’s grasp for a fumble that Austin Fontaine recovered.

That forced fumble was one of three takeaways the Terps had, tying their single-game high for this season.

But even with his play, Nchami wasn’t perfect — lining up offsides early in the second quarter.

“We just need to cut down the penalties, become more disciplined,” he said. “That starts at practice, because I feel like [lining up in the neutral zone is] something I probably do at practice … that one was on me, so I just need to get better.”