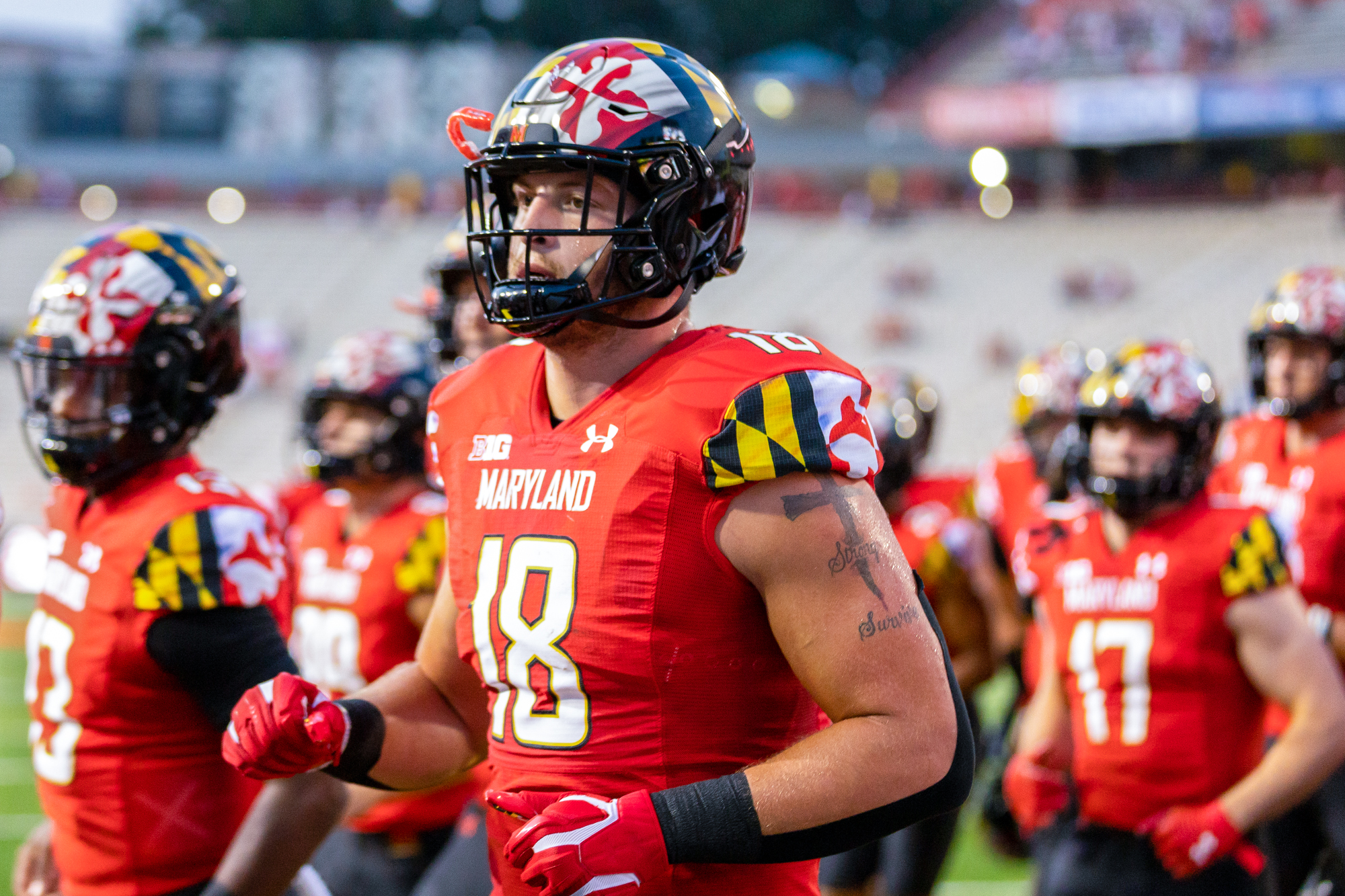 Taulia Tagovailoa scanned the field as the pocket began to collapse in front of him.

With a Michigan State defender quickly closing in, he flicked the ball in the direction of a streaking CJ Dippre.

Dippre located the ball and contorted his body, adjusting for the slightly off-target throw to haul in a catch before crashing to the ground. He sprang up and raised his arm, pointing in the direction of the far endzone in celebration.

The tight end’s reception helped move the chains on third down, preventing an early three-and-out and prolonging an eventual touchdown drive. With the 15-yard reception, Dippre became the 10th different Terp to log a catch from Tagovailoa in just the first half of Maryland’s 27-13 win over Michigan State on Saturday.

The Terps’ ability to spread the ball to a plethora of different playmakers on offense over the course of the team’s first five games has delighted coach Mike Locksley.

“I’m happy with the way that the ball has been distributed by [Tagovailoa], I like the way that every guy in our program or that’s playing for us has the opportunity to make big plays for us,” he said.

When star wideout Rakim Jarrett took a short toss over the middle for an eight-yard gain on the Terps’ first drive of the second quarter, it marked his first catch of the afternoon. Seven other pass-catchers — including four wide receivers — had caught passes from Tagovailoa before that play.

Jarrett caught another Tagovailoa pass later in the quarter, snagging a ball in the corner of the endzone to extend Maryland’s lead to eight points just before the end of the half. He finished with five catches on the afternoon, one of nine Terps with multiple catches in the eventual win.

“Coach always says that if everyone does their job the ball finds you,” Tagovailoa said. “Whoever’s hands the ball lands in, they’re gonna make a play.”

But while no individual contributor logged eye-popping box score statistics, the offense still flourished. The Terps never trailed in the game, handily defeating the Spartans for the first time since 2016.

“Statistically it’s maybe not great for some of our great players that we have because maybe they’re not being the focal point of 20 targets,” Locksley said. “But I just think the more diverse you are in who touches the ball, the more they have to defend on defense.”

The same diversity in touches applied for the Terps’ running back room. As has become the standard for running backs Antwain Littleton and Roman Hemby, the two rotated carries alongside Colby McDonald.

Littleton provided the highlight of the game with a 68-yard jaunt in the fourth quarter, when he bounced outside and burst through a gaping hole to bring the Terps within inches of another touchdown.

Maryland finished with 175 rushing yards, with Littleton and McDonald both finding the endzone.

“We feed off of each other,” Littleton said of the dynamic in the running back room. “There’s not really any starters, it’s more so who’s hot.”

The Terps’ recent success has bred confidence in the locker room, according to offensive lineman Spencer Anderson. The redshirt senior said the team wasn’t “really shocked” by its 4-1 record given Maryland’s preparation.

When Littleton was asked how tough the offense was to stop after the team’s win over Michigan State, he spoke with conviction.

“If the passing game and the receivers know what they’re supposed to do and Lia’s keyed in with those guys and they’re all connected, and we’re keyed in with the o-line and we’re able to do our jobs, it just makes us an unstoppable offense.”