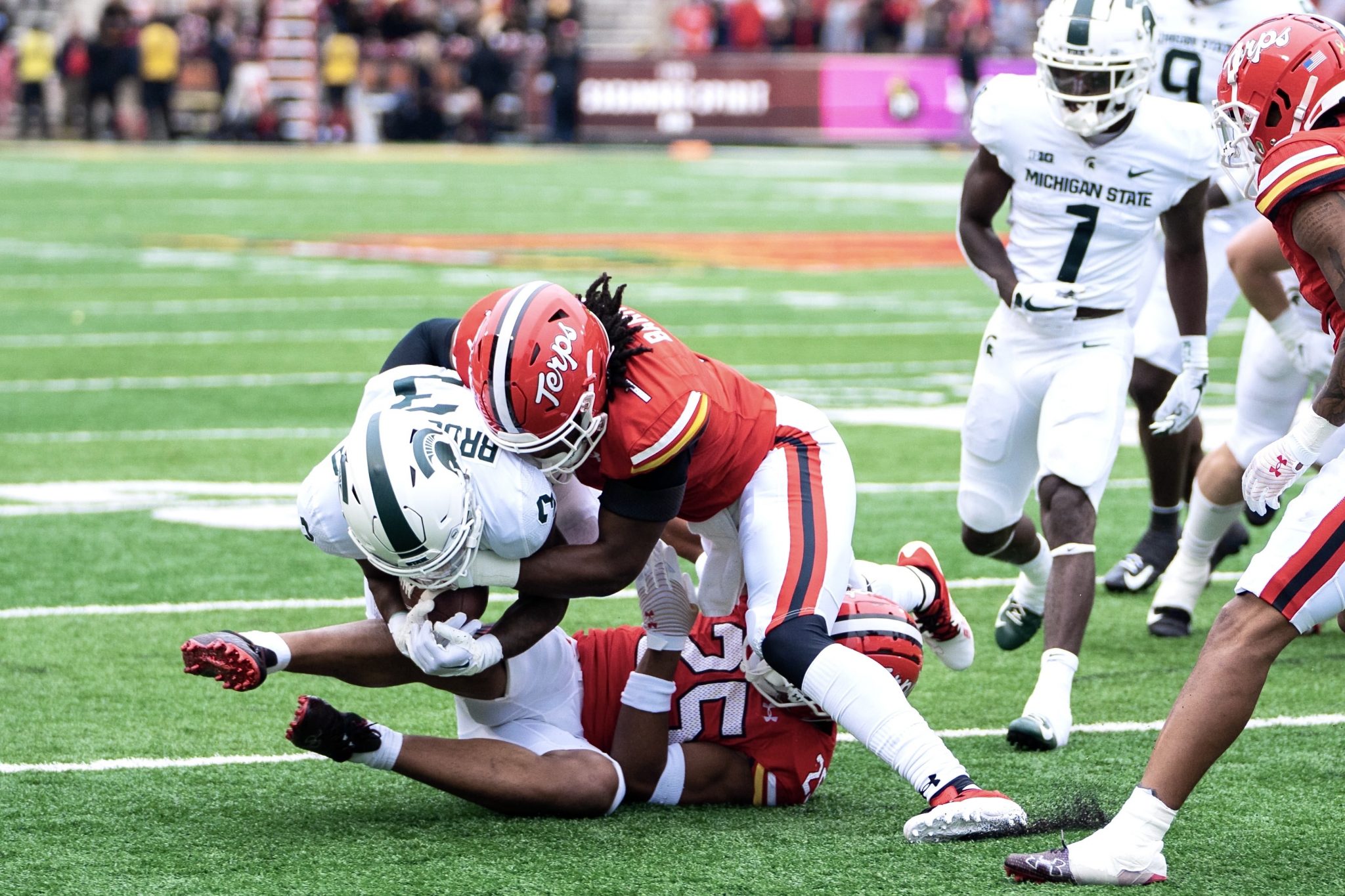 Maryland football gained 68 yards on one rushing play but couldn’t gain the final two to find the endzone. Instead, it pounded the ball up the middle four straight times with a potentially tired running back that couldn’t hurdle his way over the morass of bodies.

The failure to convert at the goal line kept the Terps’ lead at just seven with over eleven minutes to go in the game, putting the game in their defense’s hands. Earlier in head coach Mike Locksley’s tenure, earlier this season, even earlier in this game, that would’ve been a nerve-wracking proposition.

The Spartans punted after gaining just two net yards on three plays — which included two drops and a delay-of-game penalty. The stand by the Terps’ defense came as part of a 34-minute, 24-second stretch where they held Michigan State scoreless.

The defensive performance looked markedly different from the beginning of the game. The Spartans scored touchdowns on two of their first four drives, an eight-play, 77-yard march and a 12-play, 85-yard siege.

But defensive coordinator Brian Williams’ adjustments helped choke the flow of the Spartan attack and help Maryland ascend to its 27-13 victory. The Terps only allowed eight total yards in the third quarter and held the Spartans scoreless in the second half.

“What [the coaches] say every time, the first thing they said [at halftime], ‘The score is 0-0,’” linebacker Ahmad McCullough said. “If we’re up, down, we’re indifferent, whatever. We’re still coming out fighting.”

Maryland’s indifference has paid dividends. The Terps’ defense has allowed touchdowns on opponents’ first drives against Charlotte, Michigan and Michigan State. But they’ve only given up seven points in their five third quarters this year.

“Our defense, like I said for the last three games [have been] lights out in terms of just the adjustments,” Locksley said.

Michigan State feasted early with short passes that attacked the sides of the field. Quarterback Payton Thorne racked up 37 easy yards on consecutive plays in the opening moments of the second quarter when he threw short passes to areas Maryland players weren’t in position to cover.

Many of those breakdowns came because of a quirk in the Spartans’ offensive attack. Despite coming out with two tight ends and two wide receivers, Michigan State often put those players on the perimeter in a look more commonly used with one tight end and three wide receivers, McCullough said.

Maryland’s confusion with those situations led to some issues lining up. Locksley cited communication as an issue early in the game.

But as the Terps became more comfortable identifying the Spartans’ tendencies out of certain formations and improved that lack of cohesiveness, they eliminated those defensive lapses.

“Being able to adapt as fast as we can as a defense is [what helped] us to propel as a team,” McCullough said.

Thorne completed just seven of his 20 second-half pass attempts for 41 yards. He kicked off the second half with a pass that gained no yards before throwing seven straight incompletions.

The first of those nearly turned into a Maryland turnover as a screen pass nicked off a Spartan receiver’s hands and popped into the air. Cornerback Deonte Banks ran forward and hit the receiver rather than make the play on the ball.

That prompted fellow cornerback Tarheeb Still to run over and chastise his teammate, jumping up and down in frustration at the almost-interception.

“He was going for the hit, which is not a bad play. But I was just trying to tell him the ball was in the air like you could have had one and then he would have walked right in the end zone,” Still said. “Always trying to tell them, just be aware, be ready next time if it does happen.”

Banks’ play wasn’t Maryland’s only near-interception return for touchdown. At the end of the first half, Dante Trader Jr. picked off a pass and streaked toward the end zone. But a personal foul call that came to Locksley’s ire wiped out the turnover and the touchdown.

McCullough, who’d jumped up and down in glee, saw the flag and knew the Terps had to put the play behind them. He emphasized the importance of “short-term memory loss” for himself and all defensive players.

That’s good advice for a defense on a play-to-play basis, but it also seems to be one this Maryland defense embodies within games.

“If you’re dwelling on the past, you’re hurting yourself as a player,” McCullough said.

Even when they’ve started games poorly, they’ve found ways to put miscues behind them in favor of adaptations that help them stifle opposing offenses.