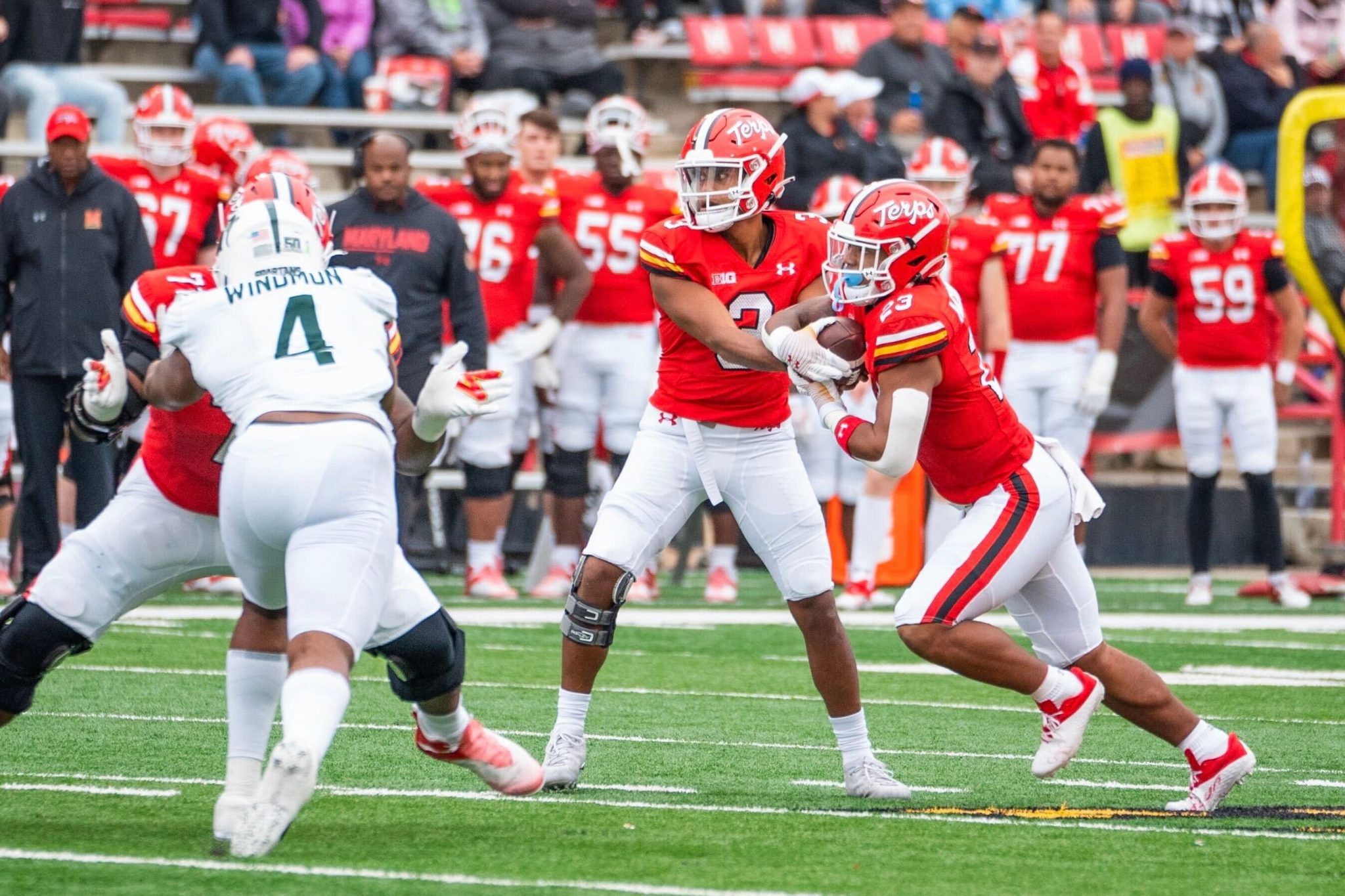 Just days earlier, Tagovailoa watched as his older brother, Tua Tagovailoa, was stretchered off the field after suffering a gruesome concussion on national television. Maryland was “on pins and needles” watching their quarterback deal with the potential ramifications of his brother’s injury in the leadup to the game, head coach Mike Locksley said.

But on Friday evening, Tagovailoa found relief in a FaceTime call.

He and his brother spoke on the phone after the team’s dinner on Friday evening, where Tua Tagovailoa reassured his younger brother about his health and urged him to “go play” against the Spartans, according to Locksley.

It was the first time Locksley saw Taulia’s energy return since the injury occurred, he said.

“Thank god for FaceTime man because Tua was obviously able to get him settled down, he was able to compartmentalize today and just really focus on doing his job,” Locksley said.

Tagovailoa faced a difficult challenge — stepping onto a football field and playing a game that had seriously injured his brother earlier in the week.

The redshirt junior finished 32-41 for 314 yards and a touchdown through the air in the Terps’ victory. He led five scoring drives, carving up a defense that entered the game tied for the most sacks in the Big Ten.

According to running back Antwain Littleton, his quarterback played with the same demeanor and intensity that he would in any other game.

“[Tagovailoa’s] very good at quieting out all the distractions when he’s on the field,” Littleton said. “He gets level-headed when he’s in the game and he’s in that mode … when you’re just out there on that field and you’re playing a game that you love, your energy just naturally goes into it, and that’s Lia.”

His passing performance helped him pass Boomer Esiason for third place in career passing yards in program history on an emotional day for the star quarterback.

“You guys have no idea what the last 24 to 48 hours has been like for him,” Locksley said. “Obviously, the injury to his brother was heavy on his mind, and we did a good job of surrounding him [with support].”

Colby McDonald didn’t run the ball once a week ago in Ann Arbor during Maryland’s close loss to the Wolverines.

One week later, the running back was hoisted in the air by Spencer Anderson in the endzone — flexing his muscles in celebration of a two-yard score late in the first quarter.

McDonald found the field alongside fellow running backs Littleton and Roman Hemby. The sophomore capitalized on his increased role with his second touchdown of the year.

His backfield mate, Littleton, scored off an early first-quarter scamper that opened the Terps’ scoring. The touchdown marked the redshirt freshman’s sixth straight game with a touchdown, the program’s longest streak in 17 years.

“It’s very cool, but like I’ve been telling everyone, I’m not finished yet,” Littleton said of his streak. “We still have a whole season ahead of us.”

He continued his rampage with a second-half handoff, rumbling 68 yards down the field to the two-yard line.

Maryland’s starter, Roman Hemby, only rushed for 27 yards but chipped in five catches for 29 yards.

“Between [Littleton] and Roman Hemby and Colby McDonald as well as the freshman Ramon Brown, we really feel like that room has done a tremendous job contributing,” Locksley said.

[Injuries limited VanDarius Cowan in the past. Maryland football gave him a ‘fresh start.’]

The Terps thought they had forced a pivotal swing as the second quarter clock waned.

With less than a minute remaining in the half, a Payton Thorne pass intended for Jayden Reed sailed high. Reed stretched his arm in an attempt to corral the ball, but the pass ricocheted off his hand and into Dante Trader Jr.’s arms.

Trader maneuvered his way toward the endzone, diving for the pylon before being swarmed by his teammates in celebration of the game-changing play.

But Maryland’s elation quickly vanished. A personal foul call on Corey Coley, who laid a hit on Reed as he jumped for the ball, negated the turnover and drew the ire of the crowd.

The Spartans were given new life as the Terps’ opportunity to extend their lead to two possessions was negated. But despite being on the wrong end of a potential score-altering call, the defense didn’t waver.

Jakorian Bennett burst free on the edge to swat away Michigan State’s last-second field goal try, sending the Terps to the locker room with a 21-13 edge.

Maryland then forced four straight punts coming out of the halftime break, holding a lifeless Spartan offense to just eight yards of offense in the third quarter.

The Terps’ defense continued to roll even after those drives, only allowing a turnover on downs and a drive that ended with the final clock expiring.

Locksley’s squad outgained Michigan State 231-75 in the second half en route to a comfortable victory over a Big Ten East adversary.