After flags flew against SMU, Maryland football aims to clean up penalties 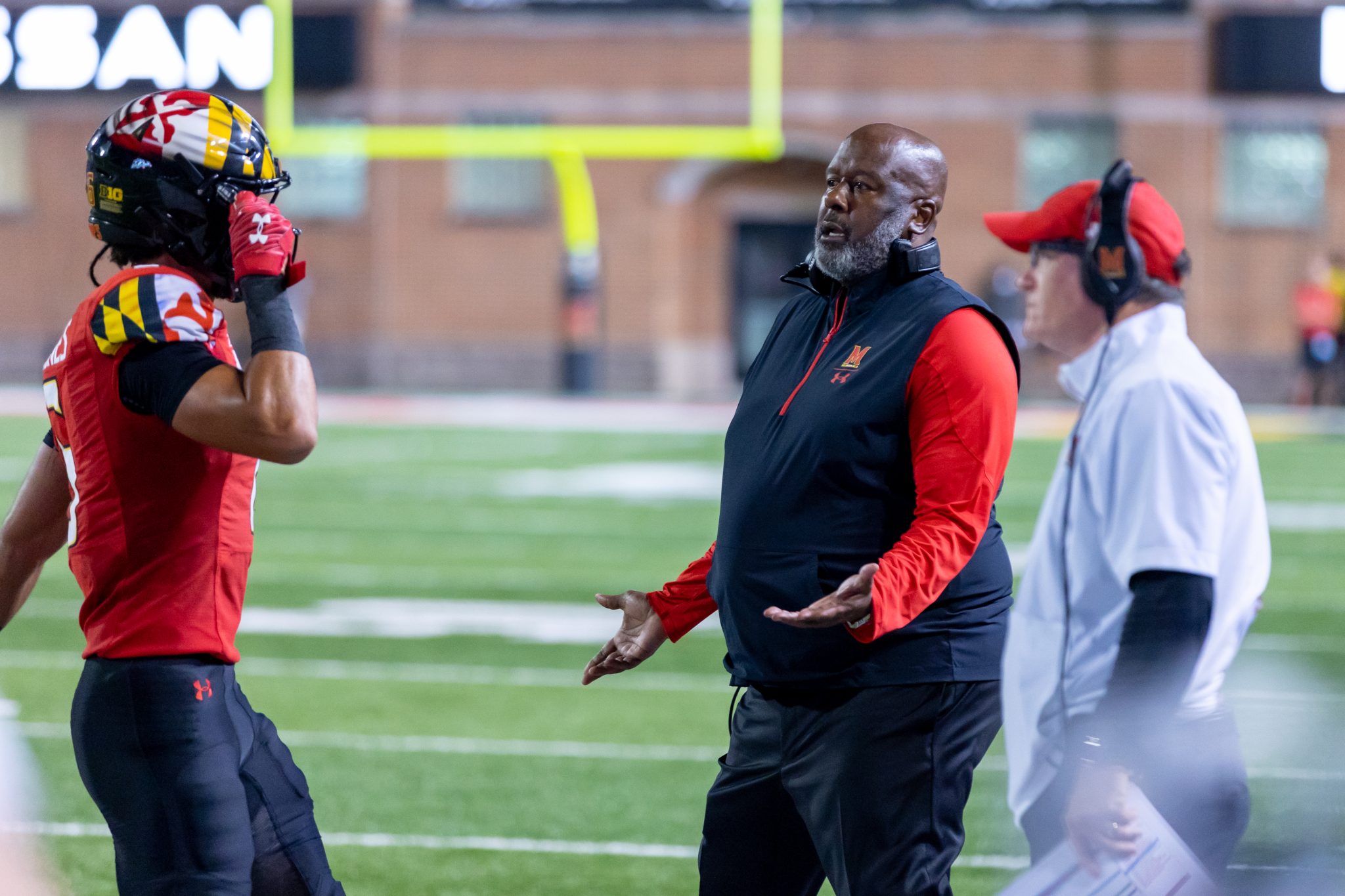 Mike Locksley compared his role as Maryland football’s coach to that of a parent.

Each player has a foundation for how they were raised within his coaching system, he said at Tuesday’s press conference — much like a child’s relationship with their parents.

“Sometimes they don’t act in character,” Locksley said. “What do you do, kick them out of your house? You punish them.”

Two days after Maryland’s penalty-plagued 34-27 win over SMU, Locksley gathered his team to show them a video. The Terps sat together and watched a compilation of each of their 15 penalties against the Mustangs. That video was supplemented by tweets and articles lambasting their sloppy play.

“Those are hurtful words, and I played the video and let them see what people thought of our program,” Locksley said.

Locksley’s squad saw each of the infractions flash on the screen before the focus shifted to practice. Each false start, unsportsmanlike conduct and holding call was recounted to emphasize where the Terps needed to improve most as they shifted their attention to Saturday’s Big Ten opener on the road against No. 4 Michigan.

[Mike Locksley asked fans to show up, and they did. The team rewarded them with a win.]

Starting defensive back Dante Trader Jr. said he felt he let Locksley down when he saw the online flack the team got for its penalty woes. As “the head of the snake,” Locksley received the brunt of criticism despite it being the players, not the coaching staff who committed the infractions, Trader said.

“We kind of feel like we let him down in that sense, that’s a lot of penalties, and we’re hurting ourselves and shooting ourselves in the foot,” Trader said.

Then came time for practice. Trader and the Terps remained focused on minimizing penalties as they suited up and jogged out on Monday afternoon to begin preparing for a towering Michigan foe.

Locksley had his players on a short leash at Monday’s practice, according to Trader.

Locksley knows his team’s penalty problems can’t fly on the road against the Wolverines. He pointed out Tuesday that while Maryland has committed a conference-high 31 penalties through three games, Michigan has been much more disciplined.

Despite having a penalty problem to patch up mere days before taking on the defending conference champions on the road in the Big House, Locksley is embracing his team’s opportunity.

“It’s a great opportunity for us against the reigning Big Ten champs, to go on the road and really leave caution to the wind and go up and try to play to the best of our ability,” Locksley said.

Star wide receiver Rakim Jarrett understands the gravity of the game. He recognizes the importance of limiting self-inflicted mistakes such as unsportsmanlike conduct penalties, too.

Locksley pulled him and Dontay Demus Jr. aside during the Terps’ win over the Mustangs after he noticed tensions mounting between the receivers and SMU’s defenders, according to Jarrett.

“We were just chirping a little bit too much,” Jarrett said. “[Locksley] said if we keep talking he’s gonna take us out.”

Jarrett quickly stopped jawing with the Mustangs after his brief chat with Locksley.

“Don’t want to mess with coach,” he said with a smile.