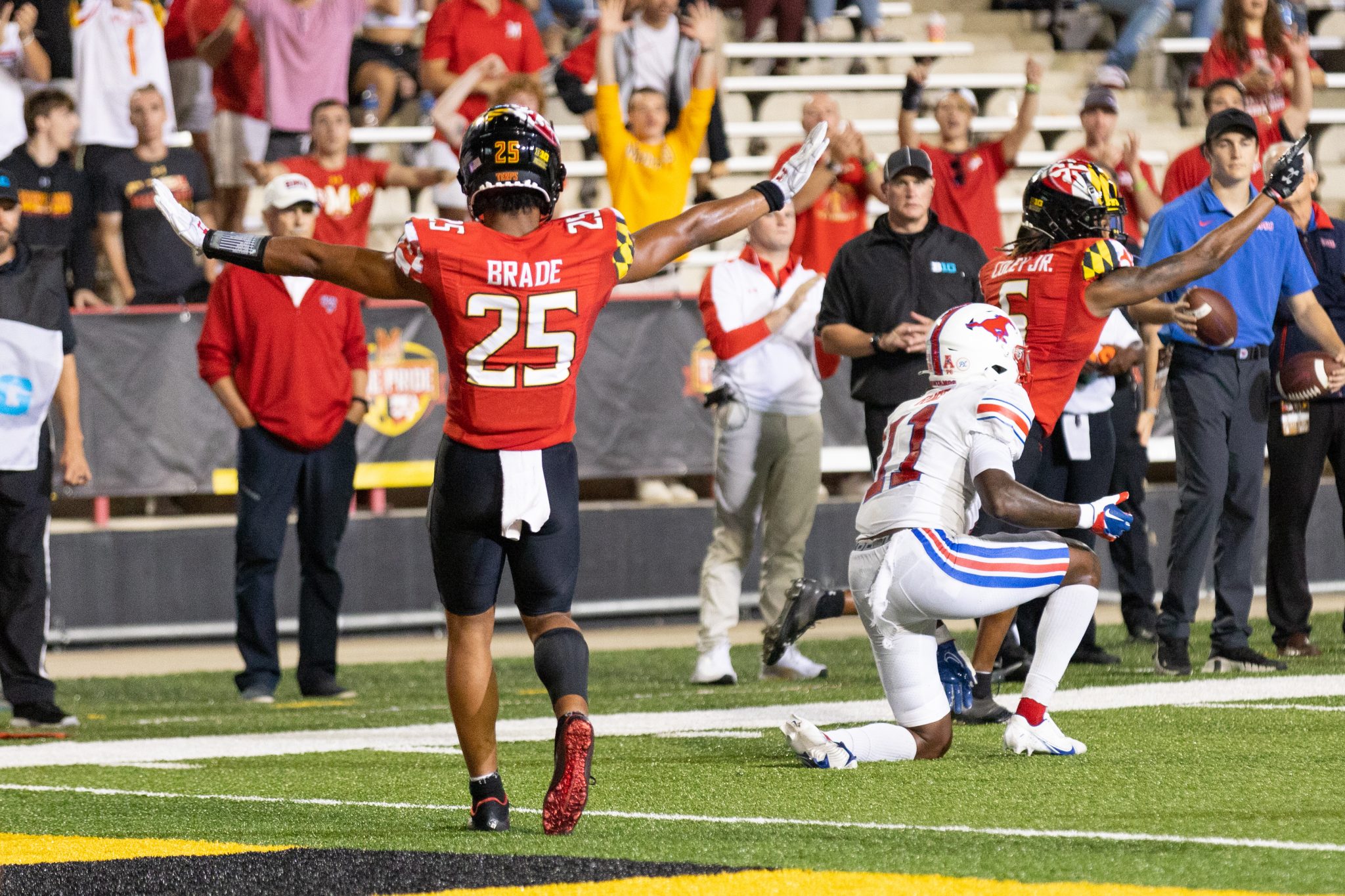 Jakorian Bennett waved his hands in the air in the direction of Maryland’s student section, conducting the crowd as the cheers began to swell at Capital One Field.

A late night back-and-forth battle hinged on one final Tanner Mordecai throw with SMU facing fourth down on the Maryland nine-yard line.

The Mustangs’ quarterback stepped up in the pocket and fired, sailing the ball over the hands of his intended receiver to the delight of the Maryland crowd.

The Terps sprinted off the field in celebration having produced a timely stop — a stand that helped clinch a 34-27 Saturday night victory that pushed coach Mike Locksley’s squad to 3-0 on the young season.

“We did not play our best football today, let’s make no mistake about it,” Locksley said. “A lot of errors, a lot of penalties, a lot of turnovers, but it was against a really good team.”

But the Terps made timely plays in the second half to curb Mustang drives deep into Maryland territory. SMU didn’t score in the fourth quarter and only managed seven second-half points.

“We were shooting ourselves in the foot the whole first half with penalties that we got … We just tried to make sure we didn’t keep hurting ourselves,” safety Beau Brade said of the Terps’ second half turnaround.

Brade rolled over onto his back and laid in pain after delivering a punishing hit on SMU receiver Kelvontay Dixon in the first quarter. The Maryland safety gingerly walked off the field with trainers and exited the game.

But Brade’s absence was brief.

He jogged back out on the field on the very next possession and broke up a Tanner Mordecai pass to force a fourth down field goal try. The junior safety racked up nine tackles in the opening half, shaking off his apparent injury as the Terps continued to duel with the Mustangs.

Mordecai attempted to extend the Mustangs’ three-point edge in the second quarter. He fired a pass that floated over the head of his intended receiver, falling square into Brade’s outstretched arms.

“It’s momentum for the defense but also of course for the offense too,” Brade said of the Terps’ three turnovers on the evening. “They get very pumped out there.”

He finished the game with 15 tackles, 2 pass breakups, a forced fumble and an interception, filling up the stat sheet in the Terps’ Saturday night victory.

“Today, Beau played with the physicality that we want our team to play with,” Locksley said.

[With eyes on SMU, Maryland football wants to clean up messy defensive play]

With the Terps threatening in the red zone deep in the third quarter, Taulia Tagovailoa rolled out of the pocket and located an open Jeshaun Jones.

The sound of cannons echoed across Capital One Field in celebration of the apparent touchdown as Jones flicked the ball in the direction of his defender.

Maryland’s excitement was short-lived, though, as penalty flags littered the field moments later. The touchdown was called back due to a Mason Lunsford holding call — his third penalty of the first half — and an additional 15 yards was tacked on due to Jones’ endzone taunt.

“I think it’s just something [we’re] continuing to work on, we’ve vocalized that because that is a negative part of us,” Dyches said of the Terps’ penalty problem. “Most of our penalties are self-inflicted, so those can get managed.”

“It [was] a little chippy out there, and again those are selfish penalties,” Locksley said. “When you get a penalty for throwing the ball in a guy’s face and responding because a guy stepped on your foot on purpose, a lot of it was the back-and-forth of how it goes, but we’ve got to show maturity.”