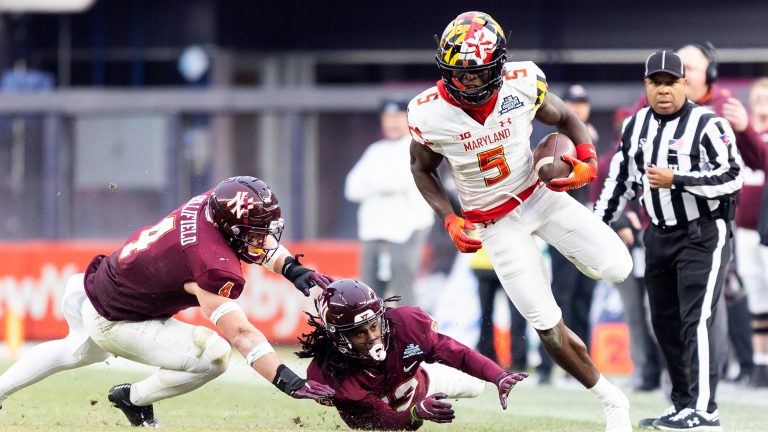 Rakim Jarrett surged off of the line on punt coverage and immediately knocked a Buffalo player on his back. The Maryland football wide receiver didn’t shy away from the physicality of special teams, instead leaning into it as he rampaged down the field.

As the returner ran left, Jarrett followed — grabbing onto the white jersey despite a potent, stiff arm. Another Buffalo player tried to block Maryland’s No. 1, but Jarrett’s grip on his opponent never wavered as he yanked him backward for a one-yard loss.

The play showcased the value in putting high-profile players such as Jarrett on the punt coverage team. Maryland worked over the offseason to improve its special teams units, and its return and coverage units both impressed in its season opening win.

“It’s important that these special teams plays, like the punt team and kickoff team, are big plays for us and our best players should be on those two teams,” coach Mike Locksley said.

The coach said he’d been “begging” his high-profile offensive talent to get on punt and kickoff teams. Having offensive starters on the field instead of defensive players gives the latter more time to rest, Locksley said.

It also gives his players experience they’ll need if they get to the next level. The team watched the Baltimore Ravens’ August preseason game against the Tennessee Titans in the stands, where Locksley pointed out former Maryland tight end Chigoziem Okonkwo was playing special teams.

Jarrett’s big play on Maryland’s only punt of the game placed the Terps tied atop the Big Ten in punt return yards allowed after one game with negative one.

Maryland ranks first in both categories so far this year. Tarheeb Still averaged 14.67 yards on his three punt returns against Buffalo and Octavian Smith Jr. exploded for a 41-yard kickoff return in his only opportunity.

The Terps started drives on their own 33-yard line on average Saturday while Buffalo started from its own 26-yard line, an advantage Locksley highlighted.

“When you study statistics, drive start average plays a major role in efficiency or ability to score points,” he said. “When you have the type of return game that we had on Saturday, it provides you with great opportunities to start in favorable areas of the field.”

Putting supercharged athletes such as Jarrett, Still and Smith could help Maryland’s special teams shift games in its favor.

Maryland’s defensive line learned how to play in different spots throughout fall camp. Henry Chibueze, who transferred from Liberty to the Terps, said he rotated between the nose tackle and three-technique positions.

That versatility paid off against Buffalo.

“You keep guys fresh till the fourth quarter, and you got guys playing hard till the end of the game,” Chibueze said on the balanced snap counts. “I feel like that’s the motto that coach Williams was trying to go by this year … there’s a lot of plays being made by [defensive] linemen because we’re all going to be fresh and playing hard and with great intensity.”

Ami Finau and Mosiah Nasili-Kite combined for seven tackles and one sack en route to being named defensive players of the game by the team, while Chibueze added two sacks and two tackles, according to Pro Football Focus.

“When you can rotate players like we did Saturday, that allows those guys to play like their hair’s on fire on every play, knowing that they’ll have a chance to get off, get a breather and get back out there,” Locksley said.