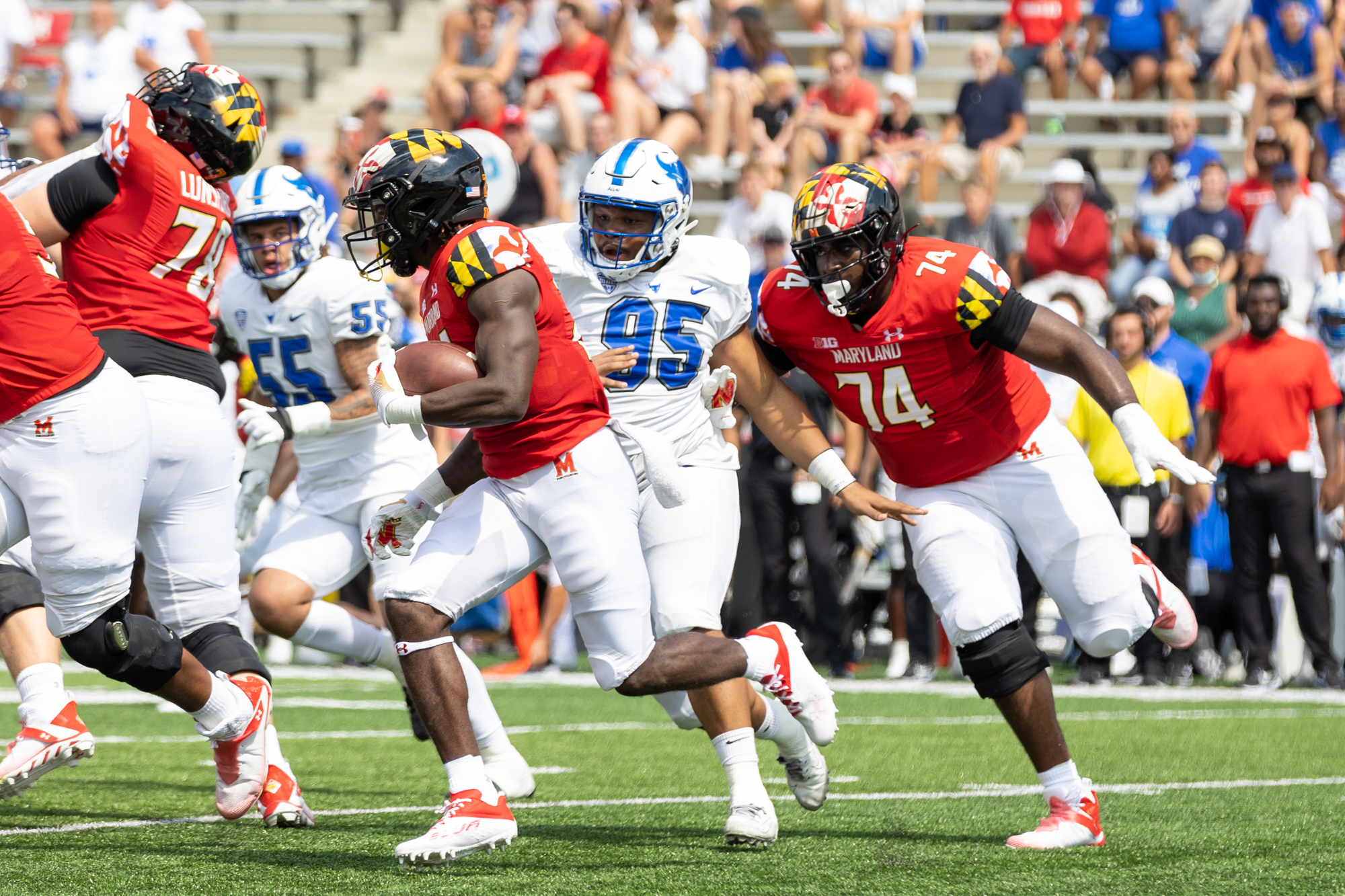 Maryland football coach Mike Locksley isn’t a fan of traveling to Charlotte, North Carolina. In an ideal world, according to Locksley, smaller programs, such as the 49ers, would come to College Park to play the Terps.

But there’s at least one member of Locksley’s squad who’s excited to make the trip down to the Queen City — right tackle DJ Glaze.

“It really taught me, just take everything I learned, work at it,” Glaze said on being around the two experienced linemen. “Just following those guys, hopefully I can continue to get better like them and see the hard work pay off.”

Glaze, a three-star recruit, made the 2019 SoMeck 7 all-conference team to finish off a high school career where he excelled despite having to come back from a torn ACL in his right knee twice, per the Charlotte Observer.

He’s been around the Charlotte program, going to a camp and a game, he said Tuesday. The tackle said he’s still working on obtaining extra tickets for the 30 family and friends he expects to come to the game.

Glaze only appeared in one game as a freshman but found himself in action during Maryland’s 2021 season. He started six games, including the last five of the season.

Playing both tackle spots, he gave up just four pressures, per Pro Football Focus, the lowest mark for Big Ten tackles with at least 250 passing snaps. He continued that success in Maryland’s first game against Buffalo, exiting the game without allowing a pressure. He did have a penalty — a holding call on an outside penalty Locksley said was just a matter of “keeping his hands tight and inside and moving his feet.”

[Continuity, versatility along the offensive line has bred excitement for Maryland football]

Maryland’s run blocking opened holes for its backs in its season opener, gaining 149 yards on the ground on just 26 attempts. Glaze said the Terps’ line came into Saturday’s game with an established focus on running the ball, especially coming out from halftime.

On just the second play of the second half, the offensive line parted Buffalo’s defense for freshman Roman Hemby’s explosive 70-yard touchdown run.

Glaze, who was on the backside of the play, said he didn’t really know what was happening. He made his block and saw Hemby explode into the second level.

The offensive line’s success comes largely because of their experience with one another — familiarity that means Glaze knows what his partners are going to do before they do it.

“Us being around so long, we have that bond already,” he said. “Sometimes on the field … we don’t even have to say anything, we just go.”

The Terps hope Glaze’s knowledge of his teammates’ play allows for the right tackle to make a joyous trip back home.