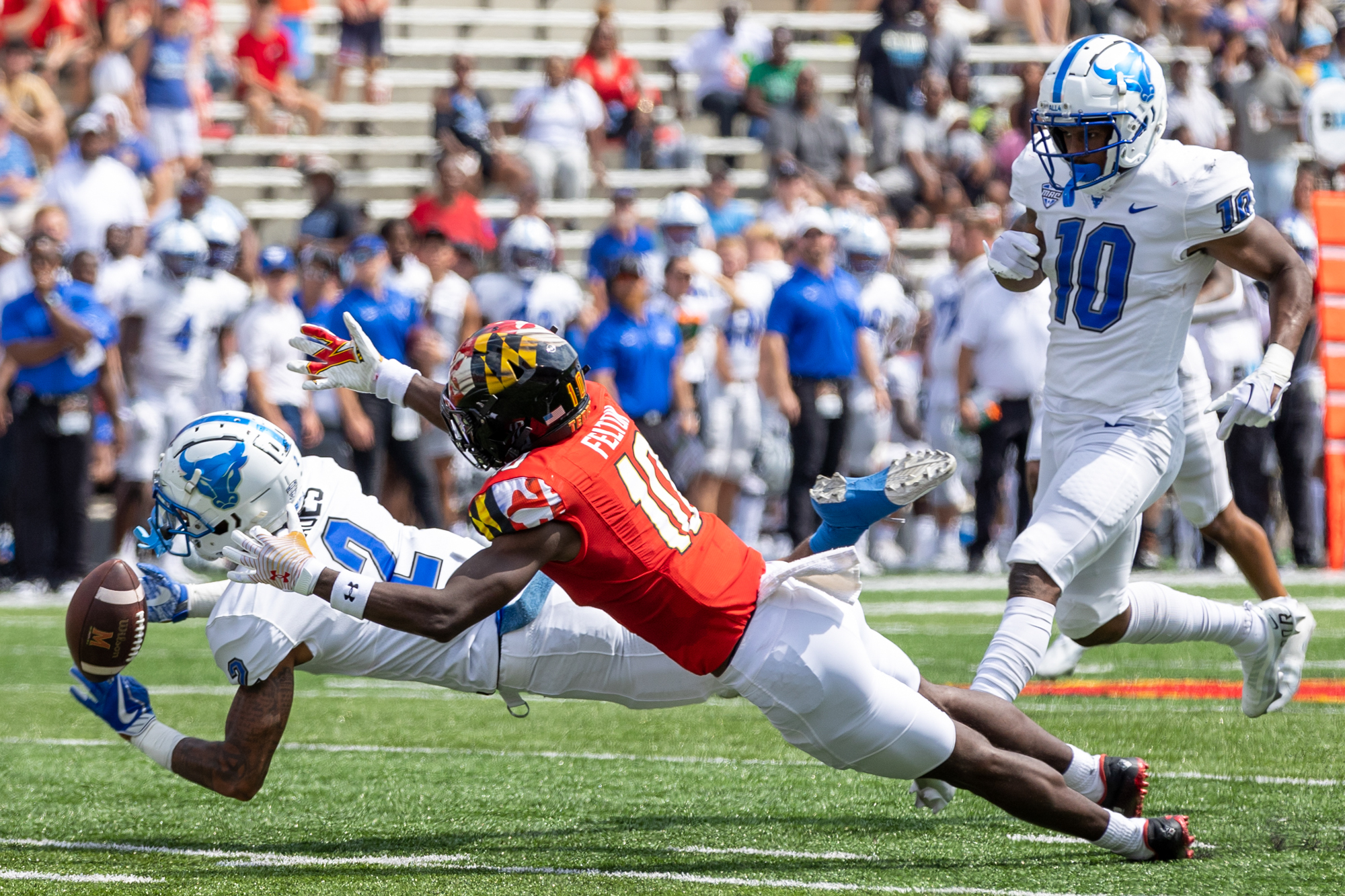 Taking a brunt of the reps throughout fall camp, Felton began to turn heads after returning at full strength from a hamstring injury he suffered last season.

“Can’t deny the type of speed that he has,” Maryland football coach Mike Locksley said. “He’s one of the guys that can take the top off the defense with his speed, he’s made a ton of plays, probably had one of the more productive training camps of all the receivers.”

The sophomore logged the second-most snap counts of any wide receiver on Saturday, slotting in ahead of Demus, Jones, transfer Jacob Copeland and freshman Octavian Smith Jr. with 34 snaps. Only Rakim Jarrett logged more reps against the Bulls, playing 41 snaps during Maryland’s 31-10 season-opening victory.

“He fits right in that room, there’s a lot of people in that room,” Glaze said. “[He’s a] fast player, you keep giving him the ball, give him the ball in space, I feel like he can make something happen.”

Taulia Tagovailoa attempted to find Felton deep in the secondary midway through the first quarter. Felton whizzed past two Buffalo defenders, streaking up the middle as Tagovailoa fired a pass in his direction.

The quarterback’s pass came up short. Felton’s defenders caught up with him as he attempted to adjust to the errant pass and the ball was batted to the ground. Felton clapped his hands together in frustration.

Felton and Tagovailoa only linked up once in Saturday’s win — the wide receiver took a Tagovailoa checkdown pass for an eight-yard gain early in the fourth quarter. But Locksley isn’t worried about a lack of opportunities for Felton in an offense teeming with potential.

“I see us with pretty much six starters at the receiver position when you look at how we’re built there,” Locksley said. “He rotates in like the rest of those guys, he’ll have opportunities because of his speed … for one of the younger guys [he’s] put himself in position to be a guy we can count on.”

Maryland football’s trainers were glued to their phones during Monday’s practice, according to Locksley.

The trainers regularly work with tennis star Frances Tiafoe when he’s home in College Park. They watched eagerly as Tiafoe bounced 22-time grand slam champion Rafael Nadal from the US Open on Monday — a statement victory for a homegrown athlete with close ties to the football program.

It was a savory moment for Locksley, who has known Tiafoe since he was a teenager.

“I kind of see myself as a mentor [to Tiafoe],” Locksley said. “He spends a lot of time here in our facility when he’s in town.”

Born in Hyattsville, Tiafoe takes immense pride in being from the Washington metro area, according to Locksley. Tiafoe trains at the Junior Tennis Champion Center — located in College Park — where he and his brother began to play as children.

He donned a red University of Maryland bracelet on his wrist as he pulled a massive upset at the major tournament.

“He’s looking for an opportunity to have a breakthrough win. I kind of see us in that same trajectory,” Locksley said. “We’re a team that’s kind of grinding in the dark, that will continue to push through and hopefully get one of these breakthrough wins like [Tiafoe] had yesterday.”