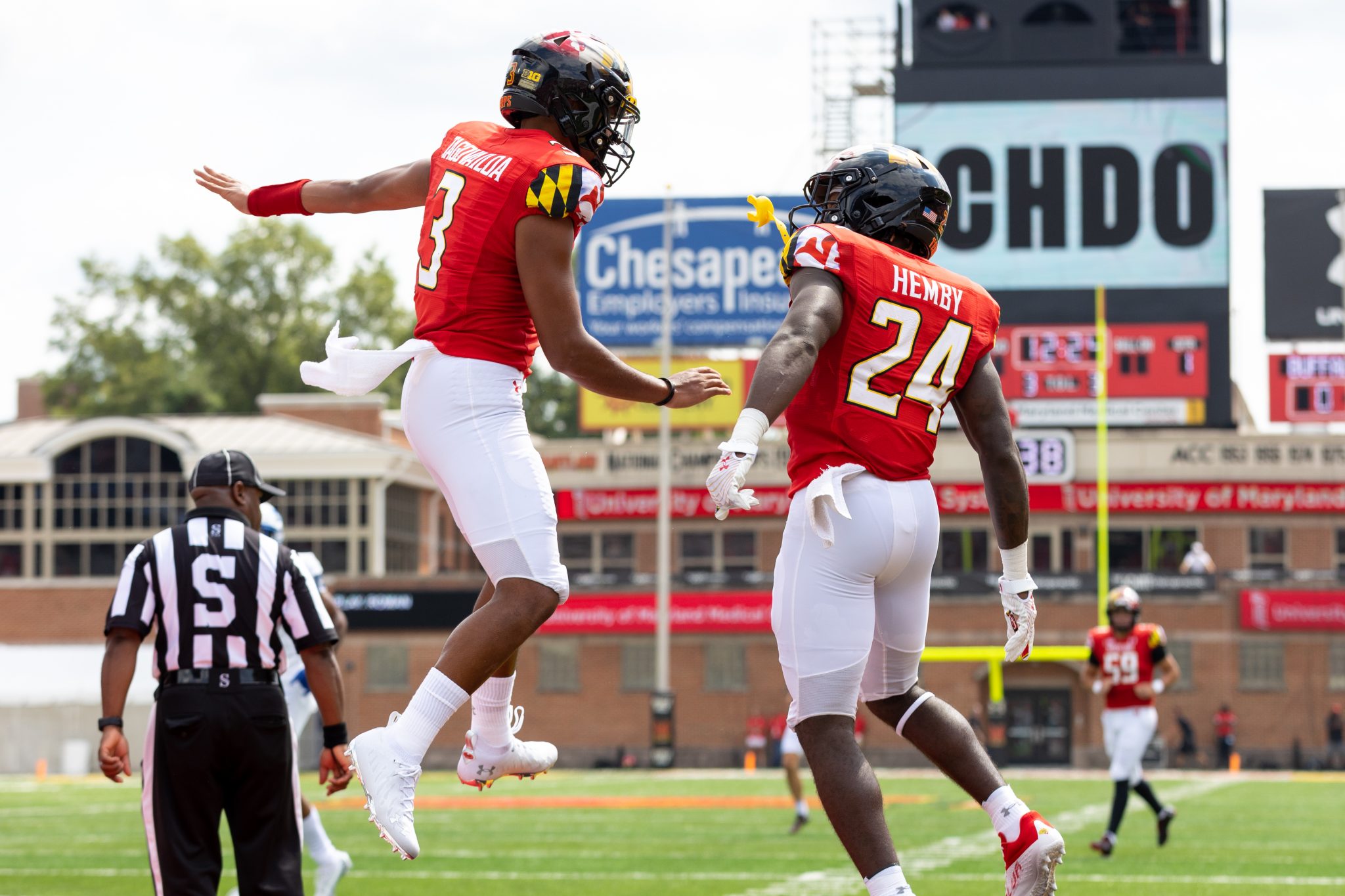 When Maryland football jogged to its halftime locker room sporting just a ten-point edge over Buffalo, the Terps looked devoid of any offensive rhythm.

Aside from two chunk plays — a 33-yard Roman Hemby touchdown scamper and a Jeshaun Jones catch-and-run for 35 yards — Maryland’s offense had been held relatively in check in the first half of its season-opener.

But on the second play of the second half, the offensive line opened a gaping hole for Hemby.

Capitalizing on aggressive blocks from Johari Branch and Spencer Anderson, the redshirt freshman went untouched for a 70-yard touchdown up the left sideline.

“Honestly, I feel like I’m gonna [score] every time I run the ball … when I saw I was on the second level I was like ‘just trust the speed,’” Hemby said.

Hemby’s second of two touchdowns on the afternoon was the highlight of Saturday’s 31-10 season-opening home win for the Terps, who accumulated 140 rushing yards to start their 2022 campaign with a win.

His first carry of the season jumpstarted the Terps’ offense on their opening drive. He took a handoff to the endzone, stiff-arming a defender on the way for Maryland’s first points of the young season.

“He’s a dog,” defensive back Jakorian Bennett said of Hemby. “I’m proud to see him get his shine, and he’s gotta continue to build from that.”

But the Terps’ vaunted offense stalled for the remainder of the quarter, going three-and-out on the next possession as a litany of penalties kept Tagovailoa from finding his rhythm.

Then, it was Antwain Littleton’s turn. On his first carry in the second quarter, the 285-pound back broke multiple tackles to bring Maryland within inches of doubling its lead. He finished the job on the subsequent play, pounding the ball up the middle for the Terps’ second rushing touchdown of the afternoon.

As the second half dawned, Hemby’s second touchdown marked Maryland’s longest touchdown run since Anthony McFarland took an 80-yard run to the endzone against Rutgers in 2019.

Littleton rounded out the running back room’s four touchdowns on the afternoon with another one-yard score, leaping over his offensive linemen and the Buffalo defense to stretch Maryland’s lead further.

He repeatedly pumped his fist in celebration as his teammates swarmed him in the endzone in celebration of his second score of the game. The early performance showed the potential of a position group that entered the season with few established contributors.

“We showed good depth there with Colby [McDonald] coming in, Antoine had some big runs there and showed his power … I thought Roman showed exactly why we named him our starter,” coach Mike Locksley said.

Ami Finau knew the Terps’ defense had made the stop.

After he watched Buffalo running back Ron Cook Jr. fall inches short of a 4th-down conversion on Maryland’s 20-yard line, the senior defensive lineman wagged his finger in celebration.

The Terps put themselves in good positions, as the Bulls needed 7.8 yards on average to convert on third down. Their front seven limited Buffalo to just over three yards per rush on their 16 first down attempts and stuffed them on 38 percent of rushing attempts.

“I thought our defense did a good job on first and second down putting them in third and long and third and extra-long, which allows us to either rush the passer or drop eight,” Locksley said

The secondary did its job, too. Defensive back Jakorian Bennett broke up multiple passes as Buffalo threatened to score in the fourth quarter, forcing the Bulls to attempt a short field goal as the game became increasingly out of hand.

Both times, Bennett stared at his offensive adversary with his hands clasped behind his back.

Buffalo’s offense poses a relatively lame challenge compared to the Big Ten foes that await on the Terps’ schedule. But in Maryland’s 2022 debut, the early returns were positive for defensive coordinator Brian Williams’ defense.