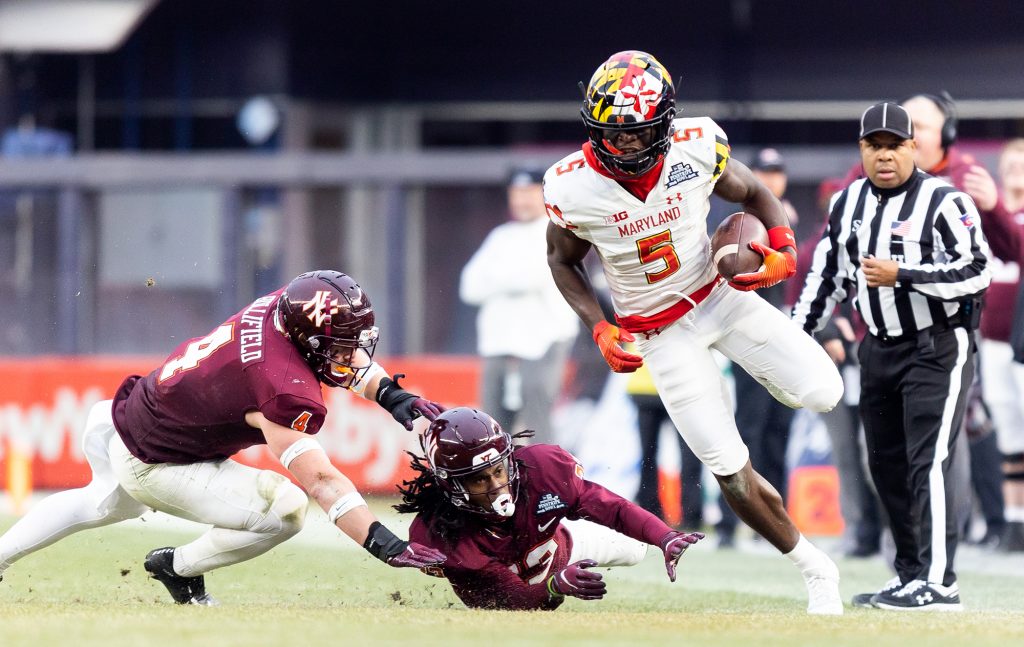 When Rakim Jarrett first got to Maryland, Mike Locksley dissuaded the then-freshman from wearing the No. 1 jersey. The coach felt it held too much pressure, especially for wide receivers, after players including D.J. Moore and Stefon Diggs had worn and excelled with the number.

Two years later, with Jarrett coming off of a breakout 829-receiving-yard season, he finally made the switch and assumed the mantle after Marcus Fleming entered the transfer portal.

“Uno,” Jarrett said after pounding the red number on his white practice jersey three times in a video posted to the team’s Twitter account. He held up his left index finger and then brought it to his mouth in the “shh” symbol.

2022 marked the first year Locksley let players change their numbers, the coach admitted in a Thursday press conference. He didn’t love the idea of doing so because if you let one do it, “you have the floodgates open up.”

But the coach’s decision to ease up on the restriction revealed the player-driven culture and approach he’s cultivated heading into his fourth year at Maryland.

“I think it’s important in this day and age of being what I call ‘player-centric,’ which means we’re here to partner with these players to provide them with leadership and with the necessary resources and tools to help them be the best versions of themselves,” he said.

“You know if the guy wants to change the number, I don’t want that to be the difference in him staying or going,” the coach said, adding he hopes the program hadn’t recruited players who’d transfer because of that alone.

Jarrett, whom The Athletic reported earned interest from SEC schools this offseason, has the number now. He also has the weighty responsibility accompanying it. His coach trusts him with it and knows the value of the number change.

“I know it’s a big deal for a lot of people, I know it’s gotten a lot of marketing, but he’s still five to me in my mind,” Locksley said.

On nearly every offensive play, Maryland football will line up with five offensive linemen and a quarterback. That leaves five spots for Locksley and offensive coordinator Dan Enos to fill with an assortment of players.

The choices the coaches will make open up different possibilities for the Terps’ offense.

“That’s part of the chess match for us,” Locksley said. “I mean, anybody that’s followed me on offense and understands [Enos], who calls our plays on offense. We’re a pro-style, multiple personnel, multiple tempo, style offense.”

The coach outlined some of the different paths his offense could take, saying his team will be diverse and have “multiplicity in how [they] attack” defenses.

Locksley keyed in on the advantage of putting one running back and two tight ends on the field in “12” personnel, saying that doing so allows for a balanced formation that could help the Terps run the ball.

“You have two tight ends to balance a defense up, have two long edges and allow your running backs to find lanes,” he said. “We know we have the ability to throw the ball … we want to establish an identity of a team that can run it when we need to.”

However, that look only allows space for two receivers, meaning at least two of Demus, Jarrett, Jones and Copeland won’t be on the field.

When evaluating which path to take, Locksley outlined a simple philosophy he and his coaches will adhere to: Get the best players on the field and get them the football. Do that, and the rest of the game plan will fall into place.

“If we do those things on offense, we’ll usually have the big plays necessary to give ourselves a chance to be successful on Saturday,” he said.