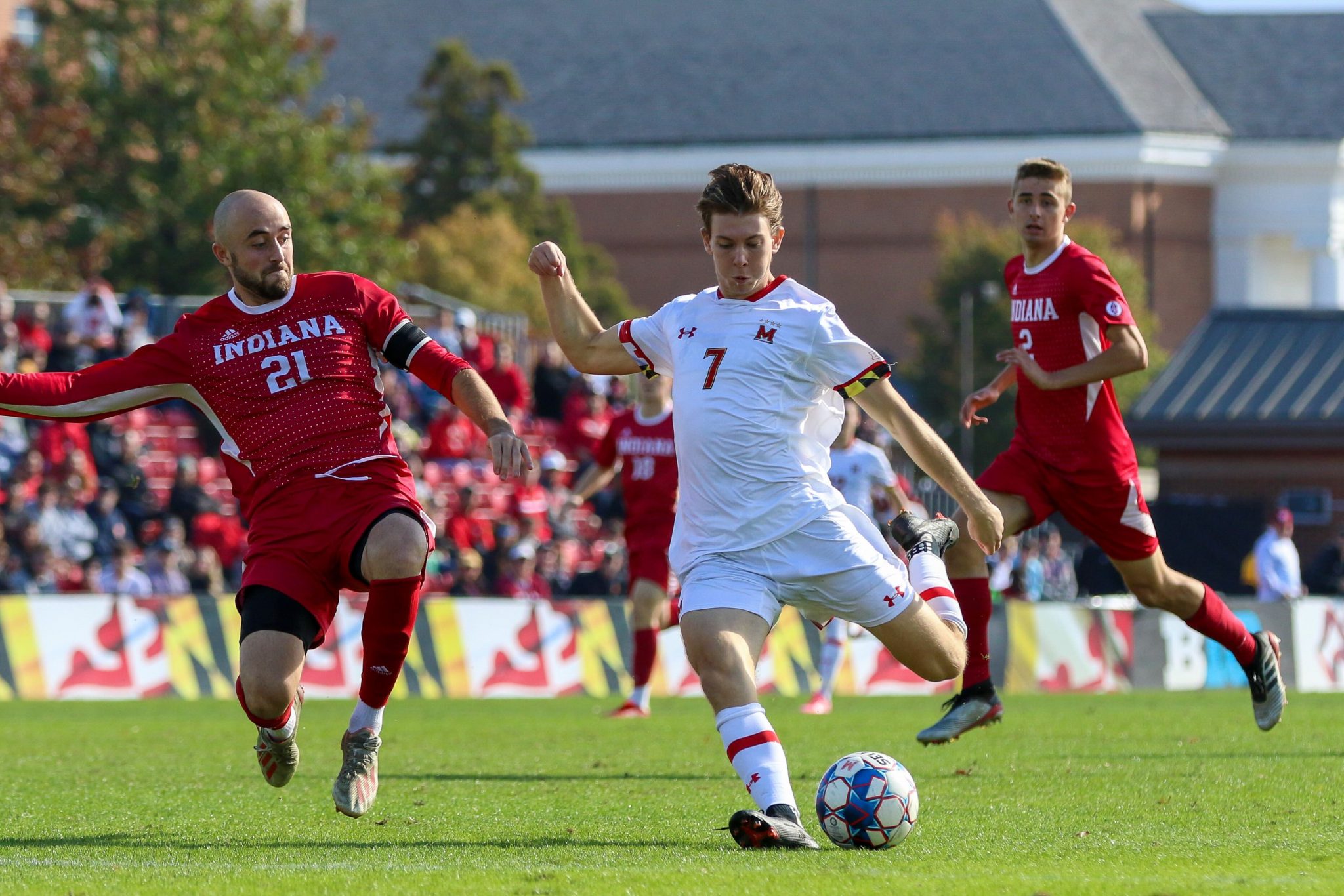 Hunter George leaped past his defender and deftly headed a cross over American University goalkeeper Dominic Dominguez. He watched as the ball nestled into the back of the net before trotting off toward the corner flag to celebrate.

George’s 50th minute finish and a late goal from freshman forward Max Riley helped Maryland men’s soccer to a 2-0 victory over the Eagles in the Terps’ second preseason friendly of the year. It was Maryland’s first win of its preseason after drawing VCU 1-1 on Friday, according to a team spokesperson.

Goalkeeper Niklas Neumann kicked away a low shot from Zemi Rodriguez in the 15th minute, denying American its best opportunity of the opening half. The Eagles and Terps failed to take their chances in the opening 45 minutes, leaving the game tied at halftime.

George quickly gave Maryland the lead from an Isaac Ngobu cross in the second half, a lead it ultimately wouldn’t surrender.

The Terps stayed on the front foot throughout the final 45 minutes and were finally rewarded with a second goal in the 83rd minute. William Kulvik headed a delivery from a free kick across the box that was bundled home by Riley, whose finish from five yards out put the finishing touches on the 2-0 victory.

Maryland will take on No. 14 Marshall in its final tune-up game on Aug. 19 before opening their season at home against No. 9 New Hampshire on Aug. 25. After experimenting with different personnel and formations in the Terps’ first two friendlies, coach Sasho Cirovski intends to use the Marshall game to prepare Maryland for a challenging season opener.

“[We] treated the scrimmages a little bit more like training exercises, and to really evaluate some of the players’ qualities against a different opponent,” Cirovski said. “When we play Marshall on Friday, we’ll put together what we feel might be our strongest lineup at this point, and we’ll get a rotation going in that game that looks good.”

New forwards could have an instant impact

Bringing in a mix of experience and youth, the Terps’ incoming class of forwards could help improve a Maryland attack that has struggled to produce over the last few years.

“The last few years we’ve struggled to have a lot of depth up front on the front line,” Cirovski said. “This year, I feel like we have a lot more, and I think it’ll show throughout the season. We struggled to sometimes score goals, and I think this year we’ll be more threatening and more menacing.”

Transfers German Giammattei and Stefan Copetti have impressive goal scoring records at their past schools, priming them to immediately contribute up top with returning forwards Bolma and George.

Copetti created multiple chances throughout the first half, forcing a good save and putting a header from about 10 yards out just wide.

Maryland also brought in freshmen Colin Griffith, Ethan Gregory and Riley. Griffith showed poise on the ball against the Eagles — beating his defender and squaring the ball across the box to a teammate in the 60th minute — and Riley’s well-positioned finish got his name on the scoresheet.

“I’ve been pleased with what I’ve seen so far,” Cirovski said of the incoming group.

Freshmen along the backline impressed

Maryland started the match with freshmen Mack DeVries, Luca Costabile and Brian St. Martin at the back.

The young defense limited American to just three shots in the first half, and only needed Neumann to make a stop on one occasion. As the opening 45 minutes went on they helped the Terps progress the ball up the field.

DeVries is a left-footed center back that can help Maryland play the ball out of the back, which he displayed with crisp passes throughout the game.

Costabile is a late addition to the Terps’ freshman class that is not listed on the team’s roster yet. Formerly of AC Crema of Italy’s Serie D, Costabile has impressed Cirovski already and could allow the coach to use Alex Nitzl in midfield or in other positions across the backline, Cirovski said.

“Most of the kids we get here, they’re what I call ‘freshman plus’, many of them have had pretty good experiences already,” Cirovski said. “It was good because Niklas was in goal and Nick was on, so you had a lot of experience to help give them confidence and help lead the backline.”

Cirovski is excited about Maryland’s depth and experience

Despite losing 11 players at the end of last season, the backbone of Maryland’s team remains intact.

The Terps will return important players all across the pitch, but most notably in their defense and at goalkeeper.

Richardson and Nitzl can fly up and down the pitch as fullbacks and are both able to play other positions if necessary. Senior Chris Rindov also offers an experienced option at center back and Neumann and Jamie Lowell have both played important minutes for the Terps.

“We also have more experience on the back line,” Cirovski said. “We’re not sure what the starting group will look like right now, but I feel better that we have a little more experience all over the field.”

Senior Malcolm Johnston, a mainstay in the center of pitch, has started 41 matches in three seasons at Maryland. Cirovski lauded the midfielder’s creativeness and said he could play a role as an attacking midfielder.

“For the first time in almost four years, we have some experience and maturity on the squad,” Cirovski said.

Joined by 10 new additions — eight of which are freshmen — Cirovski is excited for the mix of players he has at his disposal for the upcoming season.