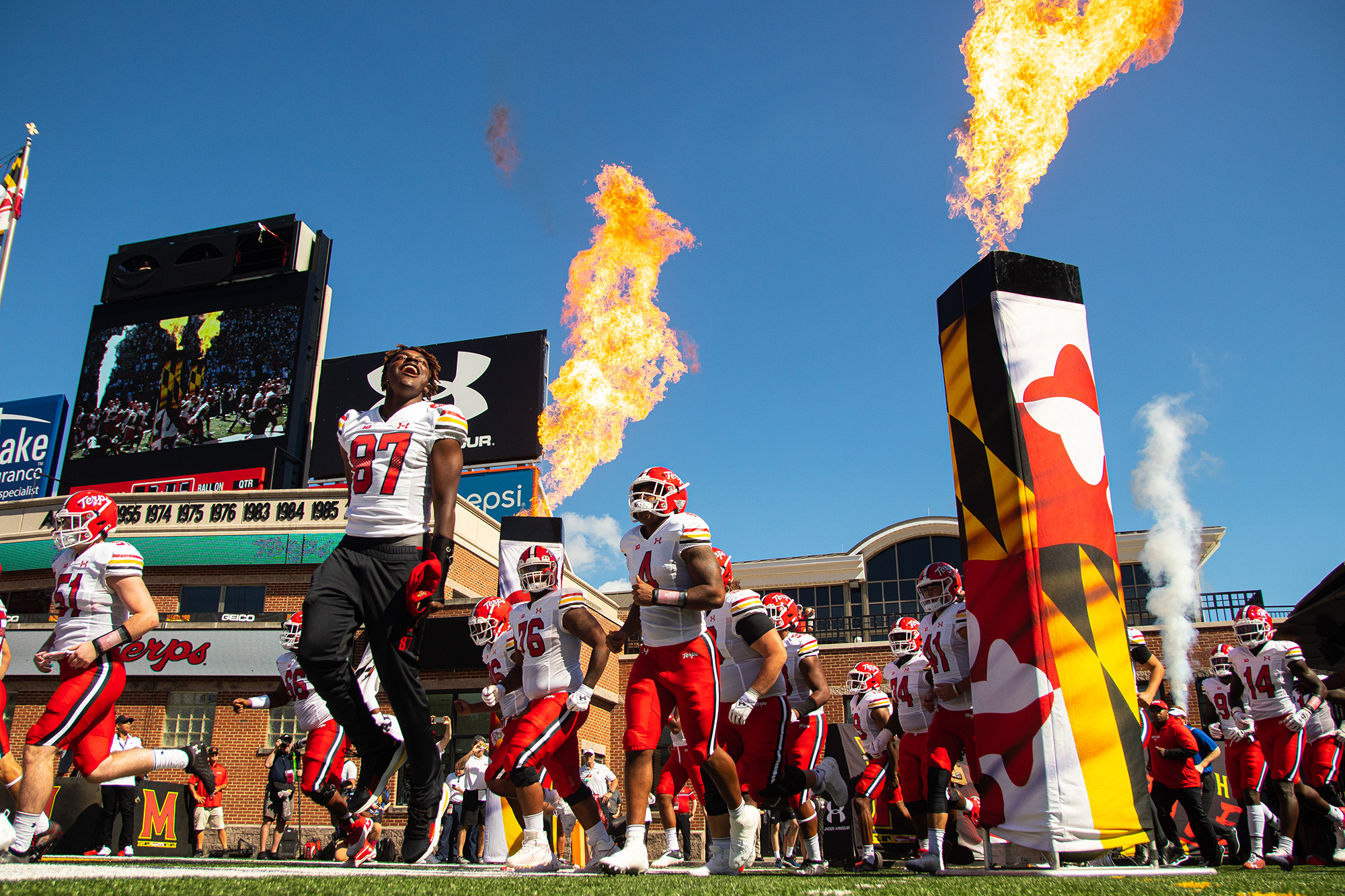 Maryland football runs onto the field before the Terps' 30-24 win over West Virginia on Sept. 4, 2021. (Julia Nikhinson/The Diamondback)

It’s one of four visible tattoos on Trader’s left arm paying homage to the late Kobe Bryant, whom he identified as one of his idols as a young athlete growing up in Delmar, Delaware.

“I like to watch his game and listen to him talk,” Trader said. “That mentality, being in that mode is what helped me.”

Now a 6-foot, 190-pound safety lurking in the secondary of Maryland football’s defense, Trader has brought a competitive edge to College Park as he looks to fill the void left by the departures of Nick Cross and Jordan Mosley to the NFL.

And as Trader has battled to “earn his stripes” for starting snaps in defensive coordinator Brian Williams’ scheme, he’s caught the attention of coaches and teammates.

“He’s [a] very smart, intelligent football player,” Williams said. “You want that on the back end obviously, us losing Nick Cross and Mosley … He learned a lot from those guys, he’s a film junkie, he’s a meeting room rat, and he has some alpha in him as well.”

Between that, habitually studying game film and probing coach Mike Locksley’s playbook, Trader has earned the esteem of China-Rose and his defensive teammates despite being one of the younger players on the roster.

“He’s just one of those kids where like,” China-Rose said before pausing. “Nah, he’s not even a kid, he’s a man.”

“I have a lot of respect for him even though he’s way younger than me … just because he works hard and he has that heart,” he said.

Defensive back Jakorian Bennett flashed a smile at the team’s media day, remembering when Trader made an impact last season. The then-freshman entered the game against conference foe Illinois on Sept. 17, 2021, after Mosley suffered an apparent injury, according to Bennett.

Not realizing the switch at safety, a surprised Bennett saw Trader blow up a play for a tackle-for-loss during the Terps’ eventual 20-17 win.

In Trader’s eyes, it’s been his obsessive preparation — spending hours in the film room dissecting formations and route concepts — that has helped him grow as he prepares to step into a starting role in just his second season in College Park.

“Film tells you everything,” Trader said. “You go into a game, you don’t want to be going in there blind because blindly covering as a [defensive back] when you’re already behind is not good.”

Trader’s emergence in Maryland’s secondary becomes paramount after Cross and Mosley’s departures. Cross led the team with three interceptions and two forced fumbles last season en route to his third consecutive Big Ten Honorable Mention while Mosley led the Terps with 83 tackles before signing with the New York Giants in May.

But according to defensive back Tarheeb Still, Trader has fit seamlessly into the starting safety role throughout Maryland’s offseason workouts.

“He’s actually young, but he’s a really good leader,” Still said. “He’s a vocal guy, he knows how to communicate, so there’s no [real] drop off … with Dante.”

As the Terps open fall camp ahead of their Sept. 3 season-opener against Buffalo, Trader looks to improve a Maryland defense that gave up 50 touchdowns last season — the second most in the Big Ten.

Despite his relative inexperience, Trader’s fellow Terps remain unconcerned about his elevated standing.

“He’s always working, always doing extra, always in the film room,” Bennett said. “On the field, you’re gonna see a smart, reliable player, he’s gonna make plays. And then off the field, you couldn’t ask for nobody better, he does all the right things, he’s a great leader in the locker room. I’m excited for him.”

“He’s gonna shock a lot of people this year.”