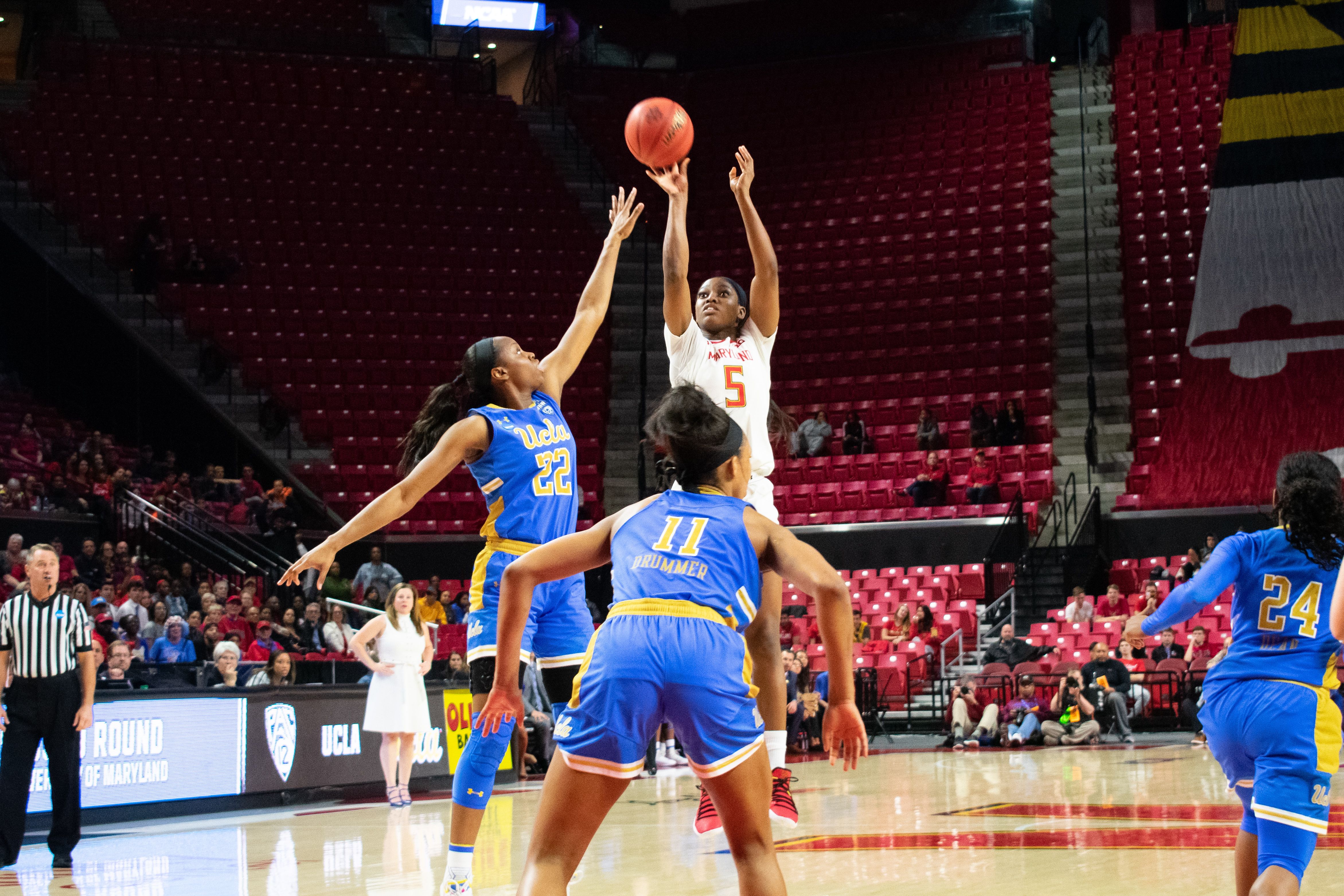 Kaila Charles shoots during Maryland women's basketball's 85-80 loss to UCLA in the second round of the NCAA tournament on March 25, 2019. (Tyler Ecker/The Diamondback)

UCLA and USC will both join the Big Ten and leave the Pac-12, according to a release from the conference Thursday. The moves will bring the total number of Big Ten schools to 16 as programs continue to shift between Power 5 conferences and dramatically realign the structure of college sports.

Oklahoma and Texas are set to join the SEC in the near future, which would also give the conference 16 teams. The Big 12 responded to the pair of departures by adding BYU, Houston, Cincinnati and UCF.

With the Bruins and Trojans both boasting over 100 NCAA championships each and set to join the Big Ten in 2024, The Diamondback’s sports staff analyzed how both California programs will impact every Big Ten sport Maryland competes in.

Despite lacking recent success, USC and UCLA will bring two of the biggest brands in college football to the Big Ten.

The Bruins’ recent postseason resume is even weaker, with only two Bowl wins since 2010 and failing to appear in one the last four seasons.

However, both programs appear to be on the rise. USC hired former Oklahoma head coach Lincoln Riley this offseason, and the impact is already being felt.

UCLA finished 8-4 last season in year four under Chip Kelly, its most wins in a season since 2015.

With conference realignment driven in large part by football, it appears the Big Ten is doing its best to keep up with the SEC.

The fabled program has found less success in the last few decades, with its last national championship coming in 1995. However, the Bruins recently reached the Final Four in 2021 and the Sweet 16 last season under current coach Mick Cronin.

Maryland and UCLA are set to play a home-and-home series over the next two seasons, according to a release. The Terps will host the Bruins Dec. 14 before traveling to California in 2023, giving a taste of what a Big Ten that includes UCLA will look like.

While USC’s program doesn’t hold the same historic pedigree as the Bruins, the Trojans have made strides in recent years. USC has qualified for the NCAA tournament four times in the last decade and reached the Elite Eight in 2021 under current coach Andy Enfield.

The two programs will strengthen an already strong Big Ten, who was represented by nine teams in last year’s national tournament, more than any other conference.

USC and UCLA will join the Big Ten as two teams hoping to rise up the women’s basketball rankings.

USC won back-to-back titles in 1983 and 1984, but hasn’t had success in recent years. The Trojans haven’t qualified for a spot in March Madness since 2014.

The Bruins made the 2021 tournament but fell to Texas early on. They’ve had more tournament appearances than USC in the last twenty years, but have yet to win an NCAA championship.

The two teams will face a strenuous schedule against Big Ten powerhouses such as Iowa, Indiana and Maryland in a competitive women’s basketball conference.

UCLA has finished the majority of recent seasons winning about 50 percent of its games, failing to replicate the past success of a program that’s won four national championships — the most recent of which came in 2002.

However, the Bruins just had arguably their best season in almost a decade with a 11-7-1 overall record. UCLA reached the second round of the NCAA tournament, a feat it hadn’t achieved since 2016. The Bruins also finished as runner ups in the national tournament in 2014.

It’s only coach Ryan Jorden’s third season in charge, who has recorded an overall collegiate coaching record of 122 wins and 96 losses. It’s possible the Bruins could build on their growth under Jorden.

UCLA will be the 10th member of the Big Ten to field a men’s soccer program.

USC does not have a men’s soccer team.

UCLA and USC will bring historically successful women’s soccer programs to the Big Ten, both being crowned national champions within the last decade.

The Bruins won a NCAA championship in 2013 and since the program started playing in 1993, it’s only had one season with a losing record, going 8-10-1 in 2015. UCLA had made at least the third round of every national tournament since 2016 before being bounced in the first round last year.

The Trojans won national championships in 2007 and 2016 and have appeared in every NCAA tournament since missing out in 2013.

The Big Ten finished 2022 with three top-10 teams, its most ever. With UCLA joining soon, the already-improving conference gets another boost.

Only seven programs have won national championships since NCAA women’s gymnastics began in 1982. One is UCLA, racking up seven championships spanning from 1997 to 2018.

The Bruins have the most titles since 2000. Their five individual All-Around winners are tied for fourth-best. UCLA also has the second-most individual NCAA champions, earning 40 titles.

The Bruins finished No. 12 in each of the last two seasons, and former coach Chris Waller resigned in April. Newly hired coach Janelle McDonald takes over, looking to bounce back and change the landscape of Big Ten gymnastics in the near future.

USC does not have a gymnastics team.

UCLA and USC will bring more successful volleyball programs to an already-loaded Big Ten. The Bruins and Trojans will join a conference that fielded eight programs in last year’s NCAA tournament, including national championship qualifiers Wisconsin and Nebraska.

UCLA flaunted a 25-6 record last season, losing in the third round of the NCAA tournament to the eventual champion Badgers. The Bruins have won seven national championships in program history, the most recent coming in 2011 under current coach Michael Sealy.

USC and UCLA do not sponsor field hockey programs.

Neither USC or UCLA currently have a wrestling team. All 14 current members of the Big Ten sponsor wrestling, and was the strongest conference in the sport at the Division I level this past season.

USC women’s lacrosse has had winning records in all except in its first two seasons in 2013 and 2014 and has earned five NCAA tournament appearances. While the program is relatively new, it’s already had success, winning a 2019 Pac-12 Championship.

USC has some experience against its future conference rivals, holding a 3-0 record against Michigan, a 2-4 record against Northwestern and a win in its only matchup against Ohio State.

While the Trojans have yet to make it to a Final Four, playing in the Big Ten will put them up against some of the best teams in the country in Maryland and Northwestern, as well as other competitive programs in one of the top conferences in the sport.

UCLA does not have a women’s lacrosse team.

USC is as legendary of a program as it gets with 12 national championships to its name. The Trojans have made the NCAA Tournament 37 times and the College World Series 21 times.

UCLA baseball won a single national championship win in 2013 and has 25 total appearances in the NCAA Championship, including five-straight appearances. The Bruins have earned five trips to the College World Series, most recently in 2013.

UCLA figures to be a factor right away in a Big Ten that only had two teams make the NCAA Tournament in 2022, as the Bruins won 40 games and booked an NCAA Tournament appearance this past season.

Meanwhile, USC is looking for a new leader of the program after it parted ways with coach Jason Gill following a 25-28 season 2022 season and a 8-22 PAC-12 conference record. The Trojans haven’t made the NCAA Tournament since 2015.

UCLA will bring the most historically successful softball team to the Big Ten. The Bruins have won 12 national championships, most recently being crowned in 2019 under current coach Kelly Inouye-Perez.

USC does not field a softball team.

USC boasts one of the best women’s golf programs in the nation. The Trojans have made the NCAA Championship 34 times, including 24 times in a row, the longest active streak in the country. They’ve also won three national championships in 2003, 2008 and 2013 have won 14 NCAA Regional titles, an NCAA record.

Notable alumni are Sophia Popov, who won the 2020 Women’s British Open and currently sits at No. 70 in the Rolex Rankings as well as Lizette Salas, who sits 41st the Rolex rankings with two runner-ups at major championships.

UCLA is another successful program, having won three national championships in 1991, 2004 and 2011. The Bruins have 33 appearances in the NCAA Championships, including a quarterfinals appearance in 2022.

A notable alum for UCLA is Mo Martin, winner of the 2014 Women’s British Open.

Both teams should immediately compete at the top of a Big Ten that has only one national champion — Purdue in 2010 — and had only two teams make the 2022 NCAA Championships.

USC has a solid men’s golf program despite not having any national championships, producing four NCAA individual champions and winning a conference-best 20 PAC-12 Championships.

UCLA won two national championships in 1988 and 2008, and made every NCAA Championship between 2003 and 2015. However, the Bruins have only made one since 2015 and recently hired new coach Armen Kirkakossian to guide the program going forward.

While both teams had down years last season they figure to strengthen and compete in a Big Ten that’s seen Illinois win the conference for seven years in a row.

UCLA will bring strong competition in the Big Ten. In the last decade, the team has only registered winning seasons. Though this past season wasn’t the best by their previous standards, the Bruins have gone recent seasons with as little as a single loss.

UCLA last won an NCAA championship in 2014 and returned to the final in 2015. The Bruins were also national finalists in 2012 and more recently finished 2021 as Pac-12 regular season champions.

USC has recently performed well among their conference opposition, losing only three of ten games in their most recent season. The Trojans finished as regular season PAC-12 champions in two of the past ten seasons, 2013 and 2015.

The Bruins’ average time of 21 minutes, 36 seconds at their NCAA regional would’ve slotted in just below Northwestern’s and Illinois’ fourth and fifth place finishes at the NCAA Midwest region championships, showing they could make an immediate impact on the conference.

USC men’s and women’s track and field are among the nation’s top programs. Fresh off of the track and field postseason in June, the Trojans had two runners qualify to join Team USA for the world championships later this summer and one more win a national championship in the men’s 400-meter hurdles.

USC figures to bring a top track and field program to the Big Ten, a conference that lacks representation at the top of a sport that is dominated by the south.