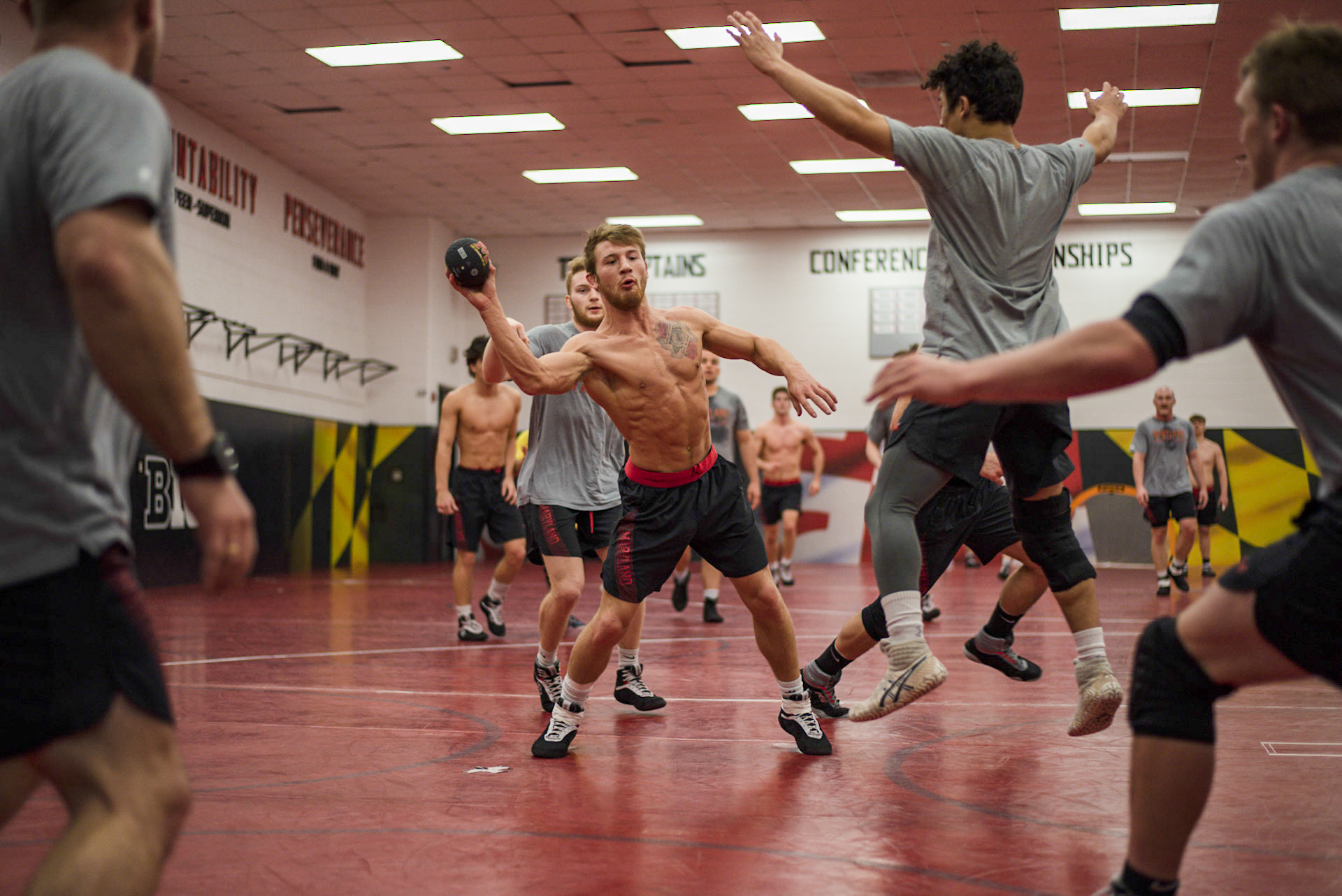 Wrestlers face off against each other in a handball match before beginning their wrestling practice on February 25, 2022. The players, which included coaches, were separated into shirts and skins to decide teams. (Joe Ryan/The Diamondback)

Music blasted in the background as sweat dripped down the wrestlers’ bodies. Trash talking filled the air inside the Maryland wrestling practice room as the wrestlers maneuvered across the mat.

But what was going on didn’t involve any wrestling whatsoever. It was just another competitive game of handball for Maryland wrestling.

Once the two goals were placed on the opposite ends of the mat, the teams were selected and the action got underway. All hell broke loose with flashy passes, turnovers, a defensive logjam and a plethora of goals scored throughout the two periods.

When the dust settled, the final result was a fast-paced game with Clemsen’s team winning by eight goals over the captains — giving the head honcho of the program bragging rights in a competitive Feb. 25 handball game.

“The coaching staff got a great victory,” Clemsen said. “Obviously, I’m the best [general manager] in handball history, and my team executed beautifully till the end.”

Once the handball session was over, the Terps were all warmed up and it was right back to wrestling with their juices flowing, ready to practice on the day.

But it’s not just at practice when Maryland plays handball. It was also something the Terps often did before their duals throughout the season.

“Instead of having a normal warm-up, sometimes it’s like hey, let’s play … handball,” Clemsen said. “All of a sudden two to three minutes into it, guys are sprinting around flying around, the game gets older, and everybody’s hot, sweaty and fired up.”

Clemsen said the best teams he’s been around, as an athlete or coach, were the most competitive teams.

Competitiveness is what Clemsen’s program needs in duals and tournaments in a wrestling conference such as the Big Ten — a conference that featured 11 ranked teams in the final NWCA Coaches Poll of the 2021-2022 season.

Clemsen mentioned when he first took over the program, he believed the team wasn’t quite competitive enough. But handball games such as the captains vs. coaches game allowed the coaching staff to help bring out the fire within the group.

[Season in review: Maryland wrestling has improved, but is still behind in the Big Ten]

There were many talented handballers on the team during the 2021-2022 season, according to Clemsen. But one name that always stuck out when the Terps played was Danny Bertoni, who graduated in the spring.

The veteran wrestler at the 141 weight class during the 2021-2022 season was the first pick in the draft taken by the skins team — and for good reason. He’s got a reputation among the program as one of the best handball players, a feeling Bertoni said he enjoys.

Bertoni was everywhere on the mat throughout the game, showing off his athleticism and playmaking abilities. As a result, he often drew the defense’s attention wherever he was on the mat.

Among his highlights in the session came after a turnover by the shirt team in its offensive zone. The loose ball was picked up by Solis, who fed Bertoni. Bertoni then used his vision to attack and passed it to a charging Cochran who finished off a goal with a jump throw despite having five defenders surrounding him.

On another play, Bertoni fit a pass halfway across the mat in between two defenders to one of his teammates to set up a shot on goal. Bertoni also made a diving pass to set up his teammate for another goal.

Those plays added to a highlight reel of a day where Bertoni finished the game with three goals and multiple assists.

“[Bertoni] is really athletic,” Clemsen said. “He’s definitely the most dynamic player in the room.”

No matter how good you perform, losing to Clemsen at handball is a feeling no Terp wrestler ever wants to experience. Bertoni expressed that sentiment.

“It was a tough one. I would say that we didn’t play our best, but we had fun out there and sometimes it happens you win some, you lose some,” Bertoni said. “But it always stinks losing to coach Clemsen.”

Handball has become a treasured part of the program’s ongoing quest to install their new culture — with the hopes of taking their next step into becoming an elite wrestling program in the country.

The Terps took a hopeful step this past season, finishing 13th at the Big Ten championships to cement their best finish by a wide margin since Clemsen took over.

“Competitiveness is contagious. And winning is contagious and that want to win is contagious,” Clemsen said. “The more the guys get a feel how that feels even in little things. They’re gonna want that … when you’re competing, the goal should always be to win no matter what you’re doing.”

[Maryland wrestling unable to get to the podium at NCAA Championships]

Handball and wrestling are two vastly different sports, with wrestling regarded as an individual sport versus the team aspect of handball. But Bertoni said playing handball allows veteran members of the program such as himself to connect with the younger wrestlers and learn more about their teammates.

“I think it correlates in wrestling a lot,” Bertoni said. “Everyone wants to win. Everyone wants to be the guy that scores the goals and makes the assists, makes great defensive plays, and that just goes into all the dual meets … individually and as a team, everyone, basically doing their role.”

Playing games such as handball has also allowed the coaching staff to teach strategy and see decision making under pressure.

From Clemsen’s perspective, handball offers his wrestlers a chance to see the sport of wrestling in a different light.

Playing handball has helped reinforce what Clemsen has preached throughout his tenure as a coach — preparing his wrestlers for the next stage of life when they hang up their singlets.

“We’re trying to help these guys prepare for the real world and for life and for opportunities after wrestling,” Clemsen said. “There’s nothing more competitive than the game of life … We’re trying to teach these guys that no matter what you’re doing, where you’re at [or] what it is, you better be trying to win because somebody else is.”