Maryland wrestling unable to get to the podium at NCAA Championships 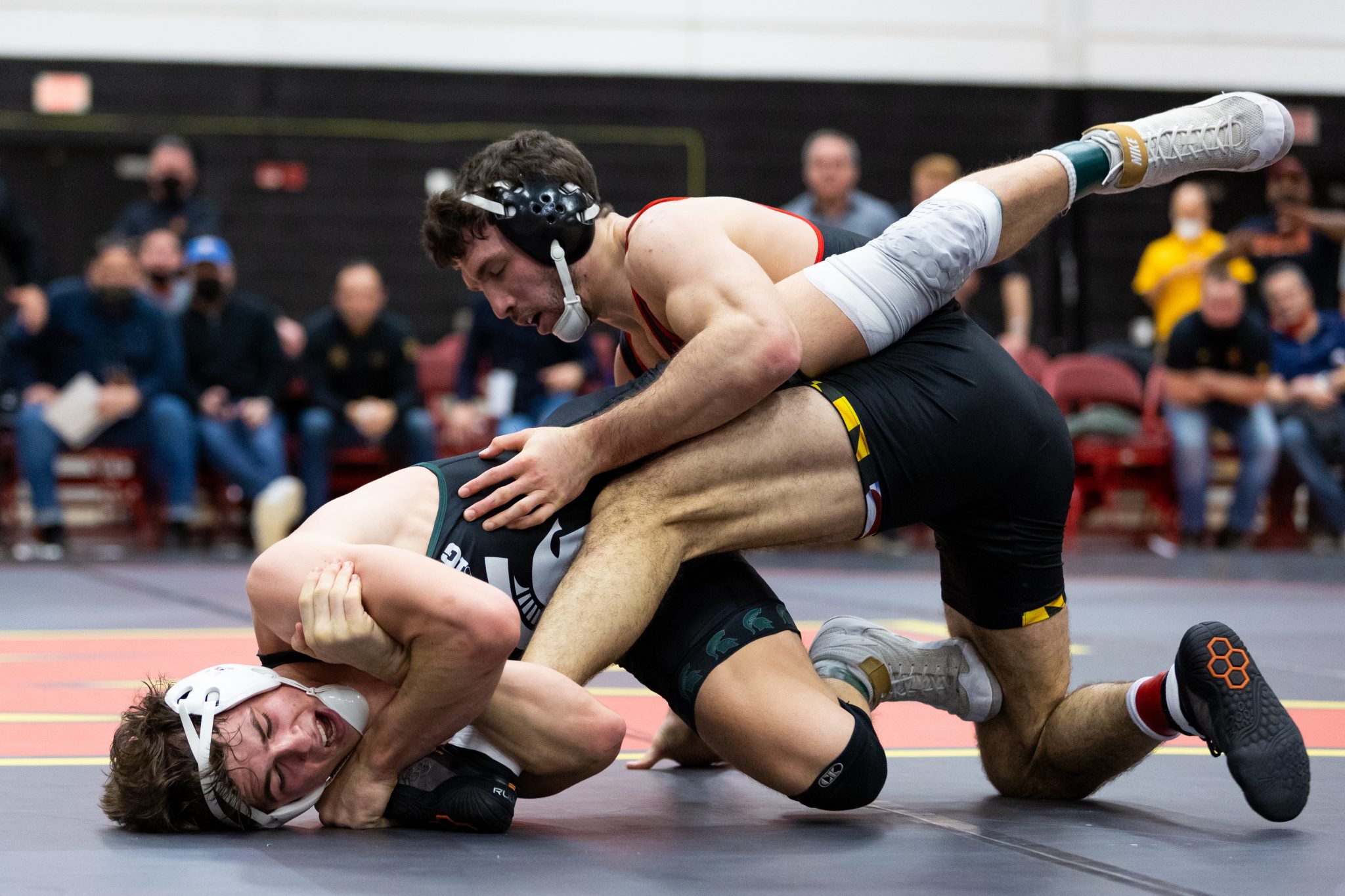 Kyle Cochran keeps his opponent grounded to the mat during Maryland wrestling's 29-6 loss to Michigan State on Feb. 4, 2022. (Cam Andrews/ The Diamondback)

Coming into the 2022 NCAA Championships, Maryland wrestling was hoping to make a statement and land one of its three wrestlers on the podium and earn All-American honors.

Instead, No. 32 Dominic Solis went 0-2 on Thursday while No. 13 Kyle Cochran and No. 25 Jaron Smith lost in their consolation bracket matches on Friday afternoon in their respective weight classes.

The losses sent the Terps home earlier than they were expecting to on day two of the championships, failing to come up with an impact win.

“This tournament is unforgiving,” coach Alex Clemsen said. “When you don’t wrestle well you put yourself in position to have negative results.”

Cochran’s NCAA Championship began against a familiar opponent in No. 20 John Poznanski (Rutgers). Cochran drove Poznanski to the mat for an early takedown to get the upper hand before Poznanski answered with a reversal to tie it up, 2-2.

[Maryland wrestling is prepared for its own March Madness]

Poznanski got an escape in the second period to take a 3-2 lead before Cochran drove him to the mat for another takedown and a 4-3 advantage.

In the third period, Cochran finished off a 7-3 decision with an escape and a takedown at the end to beat Poznanski for the third time on the season and move to the second round.

Cochran matched up against No. 4 Parker Keckeisen (Northern Iowa), looking to advance to the quarterfinals.

Keckeisen got two takedowns in two different scrambles to open up a 4-1 lead into the second period.

Cochran would get an escape to cut the deficit to two. But, that was as close as he got as Keckeisen would add two more takedowns the rest of the bout to win by decision, 9-3, to knock Cochran down to the consolation bracket.

He was greeted by No. 30 Max Lyon (Purdue) and went down early after a takedown. Cochran would answer with two escapes, going into the third period deadlocked at two with Cochran getting to top position — where he’s been great all year.

However, Lyon got an escape to pull ahead before Cochran answered with a spinning takedown and a 4-3 lead.

Even with a lead Cochran, couldn’t close it out as Lyon escaped his grasp for a tie at four to send the matchup to sudden victory — Cochran’s first sudden victory of the season.

Cochran went for the takedown quickly, but was unable to finish off Lyon and earn the two points to keep his season alive.

Lyon didn’t miss his chance finishing a takedown of his own to win by decision, 6-4, and pull off the upset.

With that loss, Cochran’s shot at the podium and All-American hopes were over, ending a great season that included a Southern Scuffle Championship and placing at the Big Ten Championships.

“This a crazy, tournament, and crazy things happen,” Cochran said. “This is my first time here and it didn’t go my way.”

Smith started off his first NCAA Championships facing No. 8 Lou DePrez (Binghamton). From the start, DePrez showed his class getting two takedowns on Smith, only giving up an escape for a 4-1 lead.

Deprez would earn over two minutes in riding time to keep Smith contained and added a takedown to win by decision, 8-2, sending Smith to the consolation bracket.

Smith would rebound in a big way with a 16-4 major decision win over Evan Bockman (Utah Valley).

With Cochran’s loss, Smith found himself as the last chance for Maryland to get a wrestler on the podium.

Smith faced off against No. 10 Yonger Bastida (Iowa State) and Bastida grabbed a 6-3 lead on Smith after two periods, putting the seven-year veteran in trouble.

Bastida finished Smith off in the third period with two more takedowns to clinch an 11-4 decision win to end Smith’s first and possibly final NCAA Championship.

“[Smith] didn’t wrestle the right match against [Bastida],” Clemsen said. “We needed to probably let it fly a little more, create some more havoc and chaos, and get some more scrambles and unfortunately, it didn’t happen.”

On Thursday, Solis faced off for the third time this season against No. 33 Connor O’Neill (Rutgers). Solis found himself in a tough spot when O’Neill locked him in a cradle and finished off the fall.

In the consolation prelims, Solis faced off against No. 30 Jacob Nolan (Binghamton) and was in a scramble in a tie at one late in the third period. But Nolan won the scramble, earning the takedown for the 3-1 decision win, ending Solis’ championship at 0-2.

What could have been a big three days for the program to cap off a productive season ended on a sour note.

Now Maryland heads into a critical offseason for its rebuild, hoping by this time next year there will be different results.