Season in review: Maryland wrestling has improved, but is still behind in the Big Ten 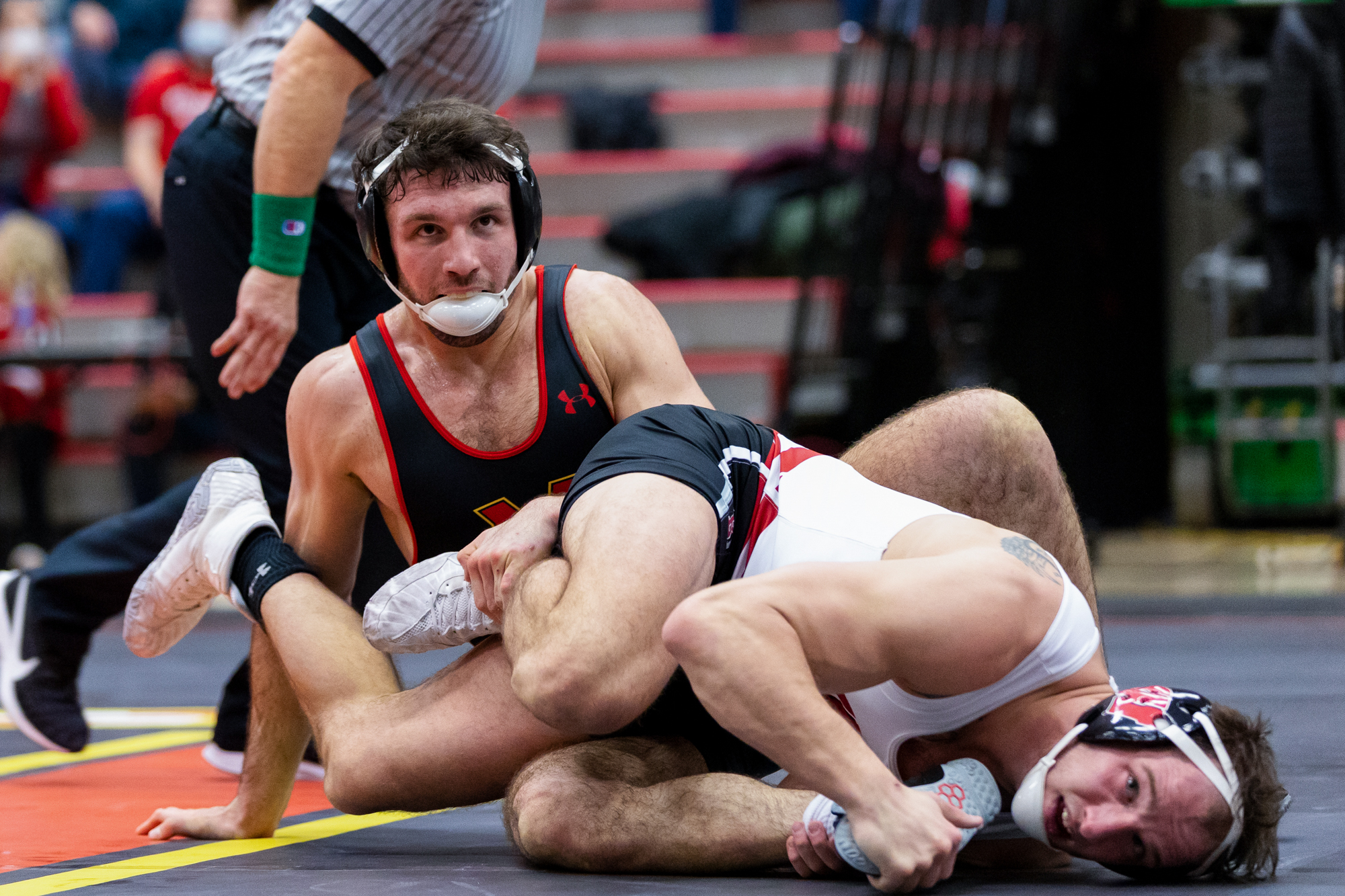 After going winless in a shortened 2020-21 season in their third year under coach Alex Clemsen, the Terps improved significantly this season, going 7-12. That figure stands as their most wins under Clemsen since he took over the program in 2019.

It’s also the most wins Maryland has recorded since the 2013-14 slate when it was in the ACC.

“I was happy that our kids got normalcy,” Clemsen said. “I think the amount of growth that we’ve seen … the amount of work that we’ve done, our kids have a really good understanding of what’s expected now and what the standard is.”

The season was full of highlights for the program. Maryland placed 11 wrestlers on the podium at the 2021 Clarion Open to begin the slate and transfer Zach Schrader won the heavyweight championship.

The Terps followed that up with two losses and then two come-from-behind wins in a tri-meet against Drexel and Duke to pick up their first back-to-back dual victories since 2017. A week later, Maryland came back a third time against Navy to ride a three-dual winning streak into the new year.

Kyle Cochran won the 184 championship at the Southern Scuffle to put the Terps captain and his team on the Division I wrestling radar.

“I think Southern Scuffle for me felt like the biggest win, the biggest shock to everybody in the wrestling community because nobody expected that,” Cochran said. “As a program, I think that it definitely helped to get Maryland’s name out there and show that we’re doing the right things.”

Cochran had a breakout season, ranking as high as eighth according to InterMat. He also picked up some big wins in conference play against Indiana’s DJ Washington and Rutgers’ John Poznanski. In the postseason, Cochran placed sixth at the 2022 Big Ten Championships to earn an automatic qualifier to his first NCAA Championships.

[Maryland wrestling unable to get to the podium at NCAA Championships]

Other Terps also had strong seasons.

Jaron Smith placed at the Clarion Open, the Southern Scuffle and picked up some victories against ranked competition, including a sudden victory win against Michigan’s then-No. 6 Patrick Brucki. Smith made the NCAA Championships for the first time in his seven-year career.

King Sandoval went on a pinfall tear, earning 13 falls throughout the season. He finished short of winning the Schalles Award, won by Air Force’s Wyatt Hendrickson.

Dominic Solis enjoyed a standout season in his first full year in the lineup at 174. He placed seventh at the Big Ten Championships and earned an automatic qualifier to his first NCAA Championships.

Despite some personal best seasons, the Terps showed they still have work to do in their rebuild.

Maryland ran the gauntlet of Big Ten play and went 0-8. The Terps are still searching for their first conference win since 2016.

Despite their winless conference schedule, Clemsen’s squad rebounded with wins against Columbia and American to end the regular season on a strong note and bring momentum into the postseason.

At the Big Ten Championships, Maryland had its best performance under Clemsen, scoring 15.5 points and finishing 13th. The Terps placed two wrestlers — Cochran and Solis — on the podium, outperforming their previous marks from the first two years under Clemsen.

As a result, Maryland made its first appearance at the NCAA Championships since 2019. Cochran and Solis competed via automatic qualifiers and Smith earned an at-large bid to compete for the podium and All-American honors. That was the first time the Terps had three wrestlers qualify for the NCAA Championships during Clemsen’s tenure.

But Maryland’s season ended in disappointment. The Terps were ousted from competition on day two of the championships with Cochran, Smith and Solis all failing to get on the podium.

“You can have a great year and then have a bad national tournament, and that’s really all people talk about,” Clemsen said. “It’s a double edged sword. I’m not sure that’s fair.”

[Maryland wrestling is prepared for its own March Madness]

The Terps will lose some key pieces of their lineup including Sandoval, Schrader and Danny Bertoni. Cochran and Smith have not yet announced if they plan to use their extra year of eligibility.

But reinforcements are arriving with their eighth-ranked recruiting class ready to be unleashed on the Big Ten.

Clemsen said it was a tough decision to redshirt some members of that recruiting class this season, but that patience may pay off in the long term.

Jaxon Smith was ranked as the top redshirt at his weight class by FloWrestling, which also named Ethen Miller as an honorable mention at his weight class. Smith and Miller combined for a 49-12 record on their redshirt campaigns and will immediately factor in the Terps lineup next season.

Others such as Braxton Brown, who went 16-5 in his redshirt campaign, will hopefully be the answer Maryland is looking for at the 125 weight class. The Terps haven’t picked up a dual win at 125 since 2020.

Adrien Cramer could make an impact on the lineup as well.

Maryland will welcome back John Martin Best into its lineup after he tore his ACL against Duke this past season. Jackson Cockrell will enter the lineup after a strong redshirt campaign.

The combination of returners and new wrestlers could create a deep lineup that could win the Terps a lot more duals in the coming season.

“I know that all the guys that are coming back next year that are going to be in the lineup are going to be studs,” Cochran said. “I think we did a great job laying down the foundation … I’m really excited to see what the guys can do.”

While Clemsen was happy with the improvement he saw this year, he hopes the team is able to build off of this year’s success and take a step forward next season.

“We put the program in a position to probably take a step forward, a leap forward next year,” Clemsen said. “I hope [our kids] are dialed in and looking forward to continuing to really get after it and put ourselves in a position to capitalize on our potential.”