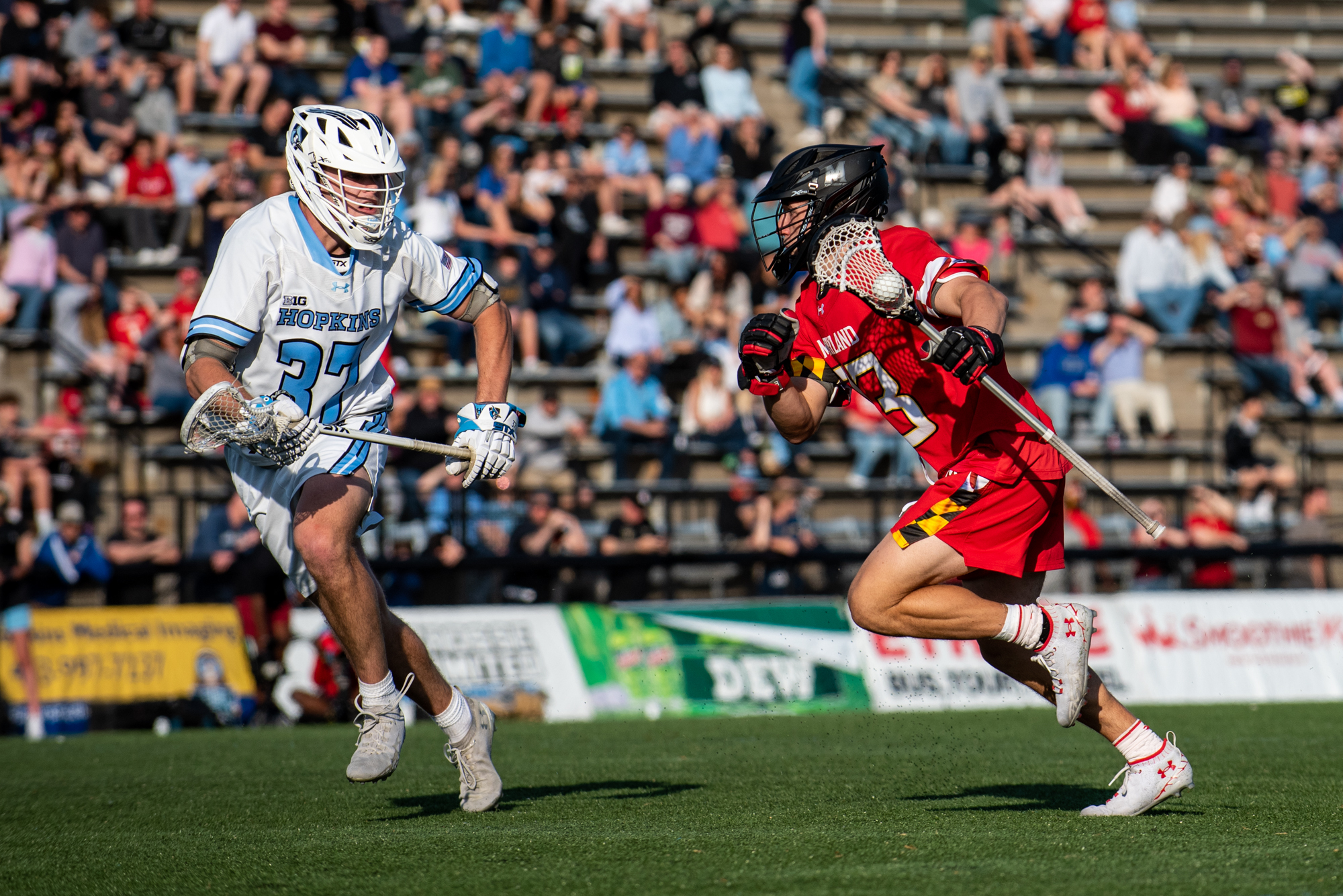 Kyle Long squared up to his defender before racing past him, getting to the front of the net and slotting a shot between the goalkeeper’s legs. Long’s shot gave Maryland men’s lacrosse a lead just 29 seconds into its last matchup with Johns Hopkins on April 23.

Owen Murphy added a goal against his former team before a Roman Puglise rip in transition gave Maryland a 3-0 lead less than three minutes into the game.

The Terps jumped on the Blue Jays and didn’t let up in their 22-7 victory, handing Johns Hopkins its largest loss in program history.

“Tough day, certainly wanted to start that game better,” Johns Hopkins coach Peter Milliman said after the game before a long pause. “It was a tough day. It was not the best version of us.”

The Blue Jays were able to regroup and notch a 16-8 win over Penn State in the Big Ten quarterfinal. Now, they’ll get another shot with Maryland on Thursday when the two face off in the Big Ten semifinals.

The Terps were dominant throughout the first meeting between the teams, scoring 22 goals through three quarters while only conceding four goals.

“I think that was a game for us where everything kind of went right and certainly for them, the bounces didn’t necessarily go their way,” coach John Tillman said.

However, in Johns Hopkins’ win over Penn State, Tillman noticed some changes the Terps have had to prepare for during their long gap between games.

“They tweaked the lineup on man-up and then their first two midfields, and defensively did some things a little bit different. They dodged harder, they picked harder, which is what you’d expect after our game,” Tillman said.

The Blue Jays took advantage of a Penn State team that gave them much more space than Maryland. Epstein deked and dodged past a defender before wrapping around from behind the net and slotting a low shot past the goalkeeper in the third quarter to notch his hat trick against the Nittany Lions.

Johns Hopkins buttoned up defensively as well, only allowing two goals in the first half of its victory over Penn State, as opposed to the 12 goals the Blue Jays let up in the opening half of their loss to the Terps.

The Blue Jays will be looking for revenge in hopes of keeping their season alive when they travel to Maryland Stadium Thursday. Despite the large victory margin in the first matchup between the two teams, Anthony DeMaio said the Terps are fully focused as the two prepare to clash in the Big Ten tournament.

“It’s always harder playing a team twice, especially when it goes well the first time,” DeMaio said. “Just gotta keep that in the back of my mind and keep plugging away. They’re a good team. We have a lot of respect for them.”