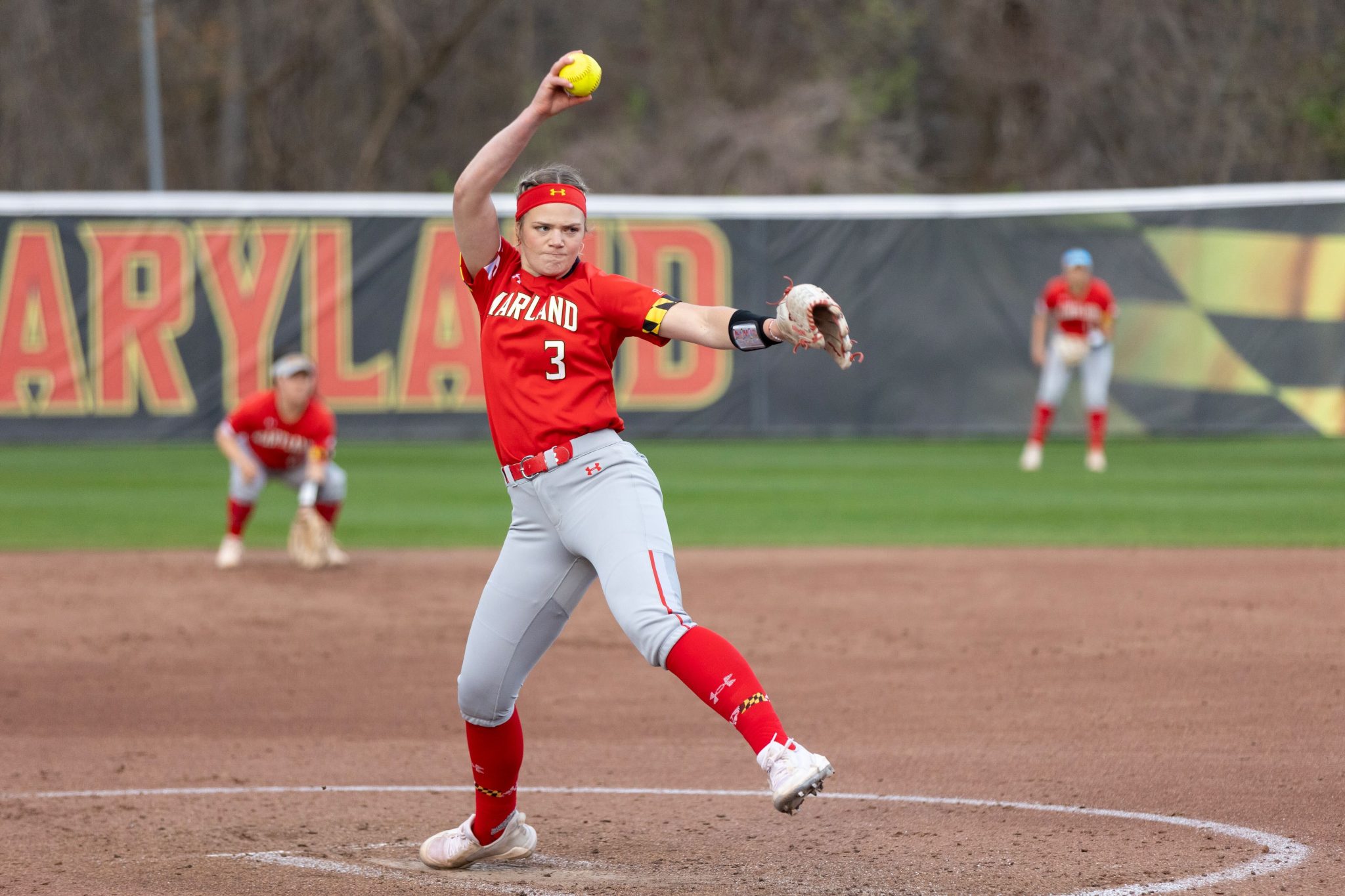 Maryland and Michigan State entered the third stuck in a scoreless tie. Then the Terps’ bats exploded.

Six hits, two walks, and two Spartan errors allowed 13 Terps to come to bat in the inning and seven to score.

After knocking out the second Michigan State pitcher of the inning, Maryland showed its looseness — dancing in the dugout, looking as comfortable as ever.

That eruptive third inning catapulted Maryland to a 7-2 victory over Michigan State, as the Terps danced all over the Spartans to take game one of the weekend series.

Michigan State started its ace, Ashley Miller, who entered the game sporting a 1.55 ERA. In 175.2 innings, Miller has struck out 232 batters and allows just a .201 batting average.

She found herself in an early jam, as Kiley Goff led off the third inning with a walk. Megan Mikami followed with a single into left-center on the next pitch, giving Maryland a scoring opportunity with two on and no out.

A fielder’s choice and an error brought Haley Ellefson to the plate with the bases loaded and just one out. Ellefson worked a five-pitch walk, bringing home the first run of the game.

The next batter, Taylor Okada hit one into the right-center gap. The ball bounced off the glove of Abby Joseph, bringing home Kamryn Davis and Jaeda McFarland. Okada’s two-RBI double knocked Miller out of the circle, as the Spartans opted to switch to Sarah Ladd in just the third inning.

Two batters later, Ruby Butler brought home Regan Kerr on an RBI single over the head of a leaping Kayleigh Roper. After a Goff flyout, Roper botched a chopper off the bat of Mikami. The ball stayed in the infield, but Michaela Jones crossed home plate before Roper could gather and reset.

Ladd only recorded one out, as Faith Guidry relieved her and induced a groundout to end the third inning.

Trinity Schlotterbeck got the nod for Maryland after getting roughed up her last time out against Minnesota — allowing six runs in just 1 ⅔ innings.

She had no such issues today. From her very first pitch, Schlotterbeck had her best stuff in the circle.

She allowed a leadoff single in the first, but a strikeout and double-play ended the inning. She’d cruise from there — across the next three innings, Schlotterbeck retired nine consecutive batters.

In the fifth, Schlotterbeck allowed back-to-back singles as the Spartans threatened to score their first run of the game.

Kendall Kates flew out to right, and the throw in from Merissa Borkowski to third was too late to tag out Alexis Barroso. But Jones gunned Ladd down as she tried to go from first to second to get the double play.

Roper grounded out to short, as Schlotterbeck ended the inning without allowing a Spartan to cross the plate.

Down to their final three outs, Michigan State scored its first runs of the game to break up Schlotterbeck’s shutout bid.

With a runner on first and one Spartan retired in the seventh, Barroso crushed a two-run shot over the wall in left field, trimming Michigan State’s deficit down to five.

But Schlotterbeck would recover to retire the next two batters on a mere four pitches, securing the win for the Terps.