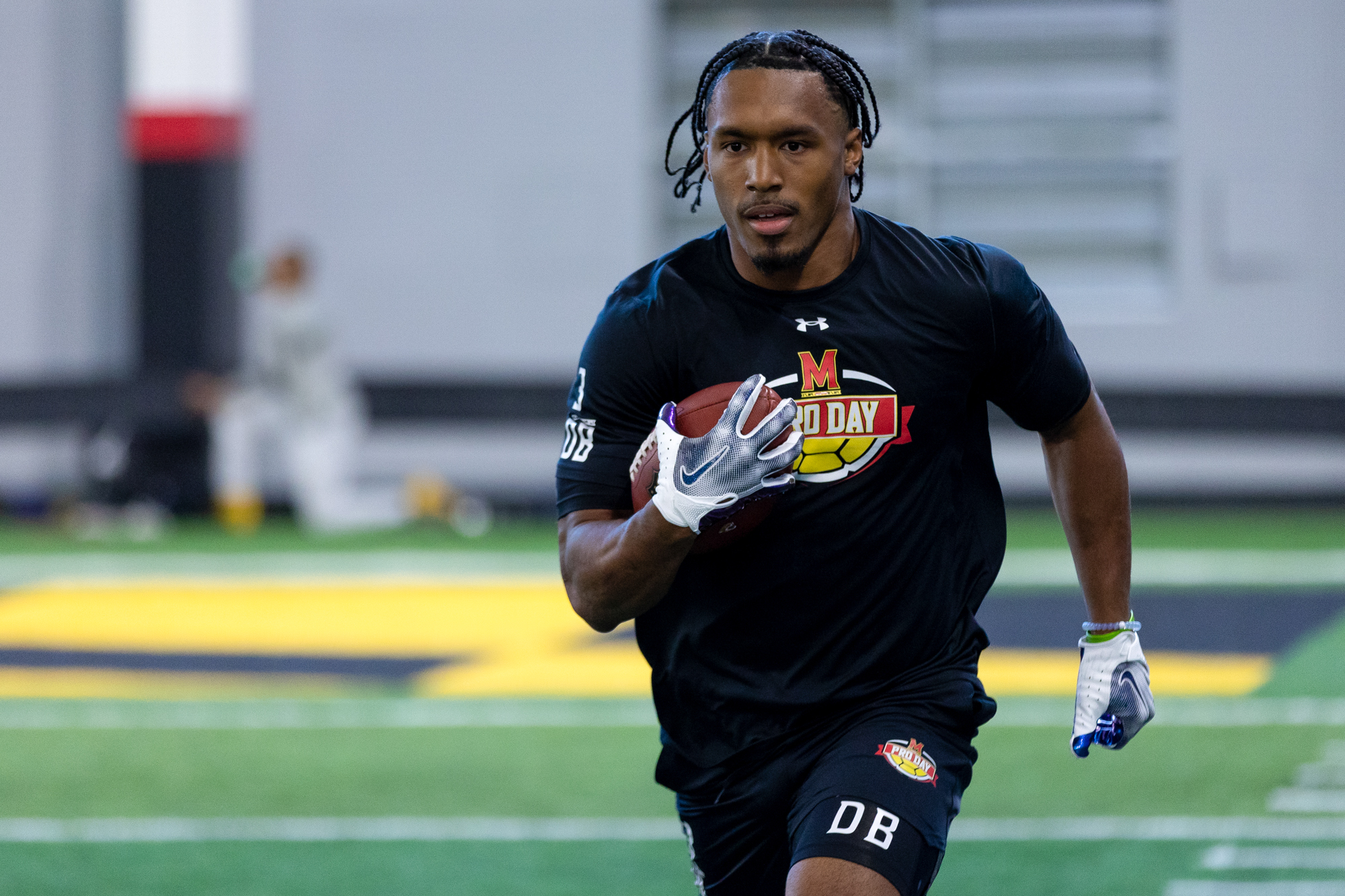 Caleb Dean didn’t think Nick Cross had what it took to run track.

Dean, now a second team All-American with Maryland track and field, heard rumors of Cross’ speed but refused to believe them. Dean ran track in all four years he was at DeMatha and had seen plenty of football players attempt to join the track and field squad — few found success.

There’s a stark difference between football fast and track fast, Dean said. Football players typically struggle with endurance, running out of gas before even the shortest races finish.

Dean quickly realized Cross was different. When Cross ran track for the first time in his junior year and started beating Dean in the 60, 100 and 200-meter sprints, Dean had to admit his teammate was track fast. He knew Cross had the potential to be special.

“It was uncommon for a football player to have that much speed,” Dean said.

Track and field is often considered a complement to athletes’ primary sports. At the high school level — and less frequently in the college ranks — football players choose to run track to stay in shape and continue to train in the spring. Skills sprinters learn and muscles they work out while running track translate particularly well to the football field.

Cross, who was unavailable to comment due to the NFL Draft, is an example of that. After shying away from track his freshman and sophomore years, he hesitantly succumbed to DeMatha’s track and field coach Buddy Crutchfield’s recruiting pitches he’d been dancing around.

The football player rarely spent time doing much else and initially worried how splitting his time between two sports would impact football. He was “1,000 percent football,” Crutchfield said.

The doubt, if it was still there, rapidly vanished. As the 2018 indoor schedule concluded and the outdoor season began, Cross’ times in several sprint events were among the best in the country, Crutchfield said.

“I think Nick really realized then that, ‘Hey, I can do both,’” Crutchfield said.

But Cross stayed, again showing how different he was from his football teammates. He had good relationships with the track and football coaches and valued how the sport helped his defensive back skills, so he worked out a way to participate in football workouts and the outdoor track season.

Doing track and field, which started as an afterthought, became a dealbreaker for Cross as he transitioned to the next level. The four-star safety recruit and the top player in Maryland told colleges involved in his recruiting process that being able to run track was a must, Terps track and field coach Andrew Valmon said.

“It was driven by football, but we said that the blessing was that we would provide a roster spot for him, we would make this work and we would work along with football,” Valmon said. “Locksley and I met, and once Locksley gave the blessing that he would support Nick being a track runner, it was a no-brainer for us.”

Football players running track is not unheard of at Maryland. But under Locksley, it’s not only allowed — it’s encouraged.

“He’s a firm believer of a track-football kid,” Valmon said. “He believes that the two go hand-in-hand with speed … Locksley looks at the bigger picture for the student-athlete … If track is an important component of [the player’s] DNA, then obviously that was something that needs to happen.”

Cross juggled offers and interest from other Big Ten, ACC and SEC powers. In a signing day flip, he decommitted from Florida State and signed with the Terps. Valmon believes Locksley’s willingness to let Cross run track played a role.

But Valmon knew Cross was at Maryland to play football. He knew track would have to work around the football schedule and that he’d have to create a unique training program tailored to Cross’ other commitments.

Football workouts are essentially year round. Even with no games being played, it took priority over track. Just like at DeMatha, Cross made it work.

“Obviously, football was his ticket,” Valmon said. “So when it came to track he had to shed a little weight … we had to kind of do an abbreviated plan because he just came off of football … in December and here we are racing in January. There isn’t a lot of time to kind of get that base.”

That abbreviated plan generally consisted of a lighter workload for Cross. He practiced lighter than the full-time sprinters did and ran in fewer and shorter races. He rarely ran in long-distance events, instead focusing on sprints, hurdles and relays.

Valmon also emphasized bringing Cross to higher profile meets while skipping smaller ones to “have people see how fast he really was.”

“The theory is more quality than quantity,” Valmon said. “Nick still was lifting football. He was doing everything football-related and then coming to track practice. For us, the key was to not get him hurt so that we can prolong his long-term future, which was obviously the NFL … Giving him opportunities to show his true talents was big.”

Although Cross’ success in track slowed once he got to Maryland, his appreciation for the sport never waivered. Forced to put on weight to meet football standards, he naturally lost some speed but remained one of the team’s top sprinters.

Cross captured two top-10 finishes in the 60-meter dash during the 2020 indoor season.

The COVID-19 pandemic essentially ended Cross’ track career. The 2020 outdoor season was canceled, and the 2021 schedule condensed to only Big Ten opponents. A conference-only slate made travel more difficult, so Cross didn’t participate in any meets his sophomore season.

He still trained with the team as much as he did in his freshman year, but Valmon decided it would be better for him to stick to practice and avoid meets.

Cross hasn’t been with the team this season as his focus has shifted to the NFL Draft. His dreams will come true this weekend. He’ll be playing the sport he first fell in love with — and the sport that prompted him to pursue track — professionally.

Some, though, would argue the sport he did on the side could have taken him just as far.

“Nick could have been, if he trained, an Olympic sprinter,” Crutchfield said. “We saw bits and pieces of [his potential], but he had so much more to give.”