From Texas to Maryland, the Ealy-Pulido sisters continue to compete together 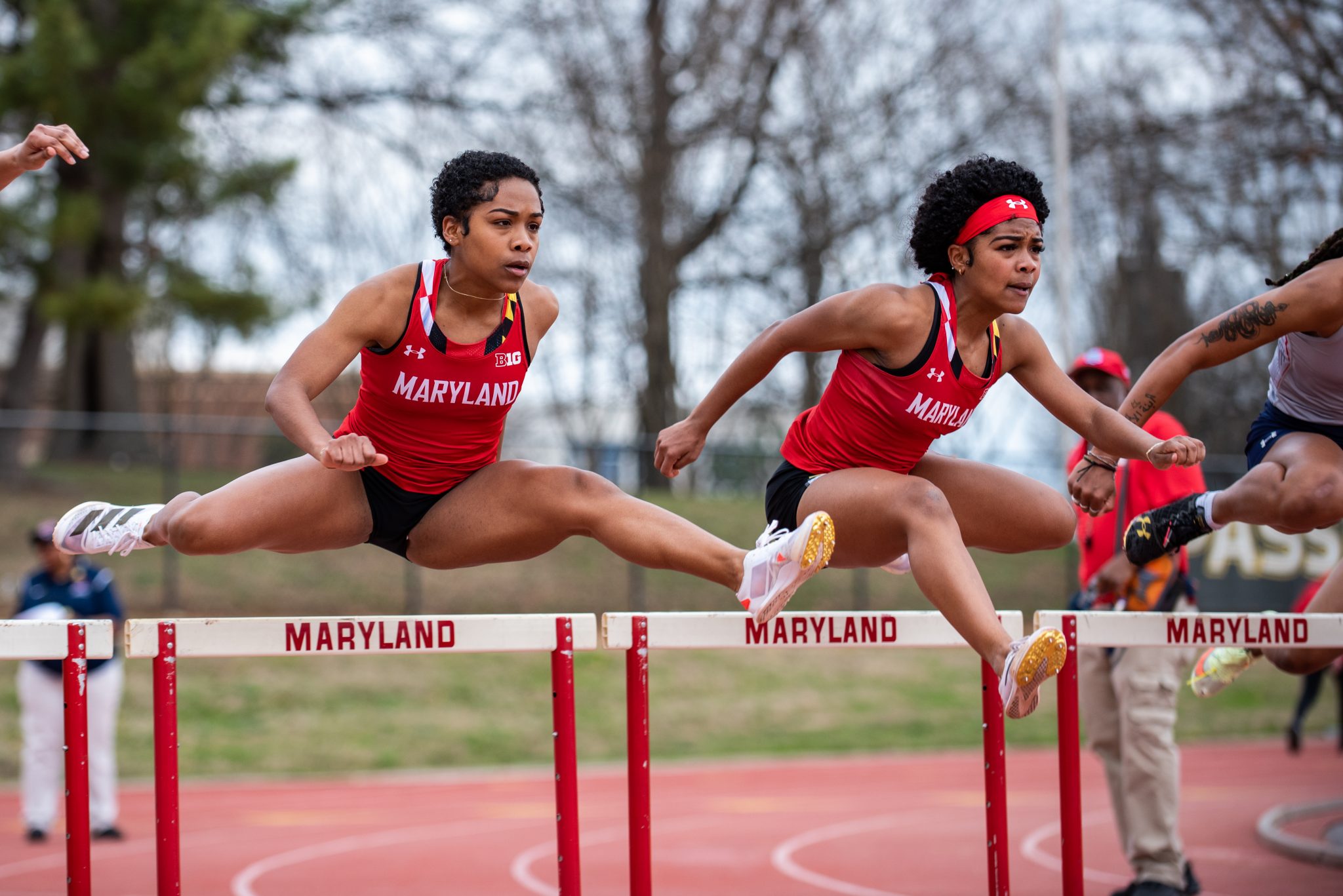 When Ariana and Kattiana Ealy-Pulido raced in the 100 meter hurdles and finished third and fourth at the Maryland Invitational last month, they did so in lanes four and five, side by side — just as they have always been.

The identical twin sisters from Texas have done everything, gone everywhere and made every major decision together. From starting track in middle school to committing to Texas State and transferring to Maryland, every life-altering choice that has faced the Ealy-Pulido sisters, they’ve made together.

The hurdlers have been figuratively conjoined at the hip for as long as they can remember.

“We do everything together,” they both agreed.

As 13-year-olds growing up in the suburbs of Houston, Kattiana and Ariana’s first love athletically was soccer. It was there that parents Scott Ealy and Maritza Pulido noticed their daughters had some natural speed when they darted up and down the field. The pair then tried basketball and were doing both sports for a period of time.

One day, the sisters approached their parents with a question.

“Dad, they’re having track tryouts at school tomorrow, can we try out?” Ealy remembers them asking.

Kattiana and Ariana’s first track meet came, and only Pulido could make it.

“[Pulido] called me and she was like, ‘Hey, Scott, I think we got something,’” Ealy said.

“What are you talking about?” he replied when she called him.

“They won first place in all their events,” Pulido answered.

From then on, Ealy didn’t miss a meet. And Kattiana and Ariana’s track careers took off. They, too, realized they found something worth pursuing further.

The two rarely lost races from middle school on, Ealy said. Beginning to shoot up the recruiting rankings, Ealy and Pulido started to imagine a future where their daughters were running track at the collegiate level.

By her senior year at Klein Collins High School, Kattiana was Texas’ No. 1 recruit in the 100 meter hurdles. Ariana followed, ranking seventh in the same event.

The family made the decision for Kattiana and Ariana to be a package deal, making it known to interested schools and recruiters they could either have both or none at all. In doing so, they turned several top schools away.

UCLA and Houston were among the schools that wanted only either Kattiana or Ariana.

Wanting to stay close to home was a big factor in their decision, ultimately leading them to compete for Texas State. They appreciated the short drive from home and the campus, which they made frequently.

Both sisters qualified for the 2021 NCAA Championships in that year’s outdoor season as juniors. That was after Kattiana was named to the All-Sun Belt outdoor first team that season and the second team in 2019. Ariana joined her in 2021, being honored as a member of the All-Sun Belt third team.

With the coronavirus pandemic giving them an extra season of eligibility, the Ealy-Pulidos entered their senior years with two remaining seasons of track left. And for the first time in their
lives, they felt a split was necessary.

“We’ve been with each other for 22 years already,” Kattiana said. “I feel like we were at the point of our lives where we were ready to separate … It’s time for us to make our own stories.”

Separating was now a real possibility for the sisters who once ignored schools that didn’t want them both.

The two entered the transfer portal with different mindsets. Ariana wanted to stay close to home. Meanwhile, Kattiana was reaching out to Maryland coach Andrew Valmon.

“We’ve not had many kids from the state of Texas,” Valmon said. “What we sold was what the DMV had: an opportunity to grow not just athletically but academically, socially. We talked a lot about … the challenges that we’re facing on our track and how it’s going to make you a better person.”

The pitch worked for Kattiana, but Ariana needed more. She came along for a visit to tour College Park, the campus and the team’s facilities. It proved to be enough for her to overcome her desire to stay close to home.

Still, it hasn’t been easy for the Texas natives. The adjustments have been tough, and returning home sometimes crosses their minds.

“It wasn’t an easy transition,” Ealy said. “We had a lot of family talks, some tears and all that stuff to go with it.”

“A lot of prayer,” Pulido added. “It was an adjustment for all of us.”

Faith and family have long been focal points of the Ealy and Pulido household. Kattiana and Ariana have attended church and been involved with Fellowship of Christian Athletes as long as Pulido can remember.

Pulido says it’s a foundation of the family. She’s impressed to see it continue into their adult years.

“I don’t think there has been a time that I can remember where they have not been in church or have had some type of connection,” Pulido said. “Once they get to the age of 20 something, no matter what you instill in them, they’re free to choose whatever they want … It is the foundation that has kept them going.”

The family connection is maybe best expressed through their last names.

Pulido is the youngest of three sisters. Facing the threat of the family name not being carried on, she decided to keep her last name to honor her father when she married Ealy.

At birth on Nov. 5, 1999, the sisters were given the hyphenated Ealy-Pulido, but chose to go by just Ealy for most of their childhood. After graduating high school, they decided to begin using the full last name for the first time.

“I didn’t want to be left out, right?” Pulido joked. “They were going to carry on the Pulido last name just to keep honoring our Hispanic heritage and [my] Dad. If you look at them, they look African American, they don’t look not one lick of Hispanic … It made their grandfather, which is my Dad, very, very proud.”

Now eight months into their time at Maryland, Kattiana and Ariana have continued their success from Texas State by running themselves into the program’s all-time leaderboards and winning races.

Sometimes, they run together. Usually Valmon asks them if they’d prefer to be in side-by-side lanes. Ironically, Kattiana doesn’t like doing it. Ariana does.

“It throws me off,” Kattiana said.

But Ariana uses it to track her own pace.

“If I’m right with her or in front of her, I know that I’m doing well,” she said, acknowledging her sister’s speed advantage.

Although maybe not on the track, Kattiana appreciates how Ariana has stuck by her side through their unique journey that track has taken them on.

“If I didn’t have my sister, I think it would be hard just coming to Maryland by myself,” Kattiana said. “I think I would have just been very defeated. But I think having her has made the process so much easier. And just knowing that I get to compete against her every day, I think that just motivates me to be better.”