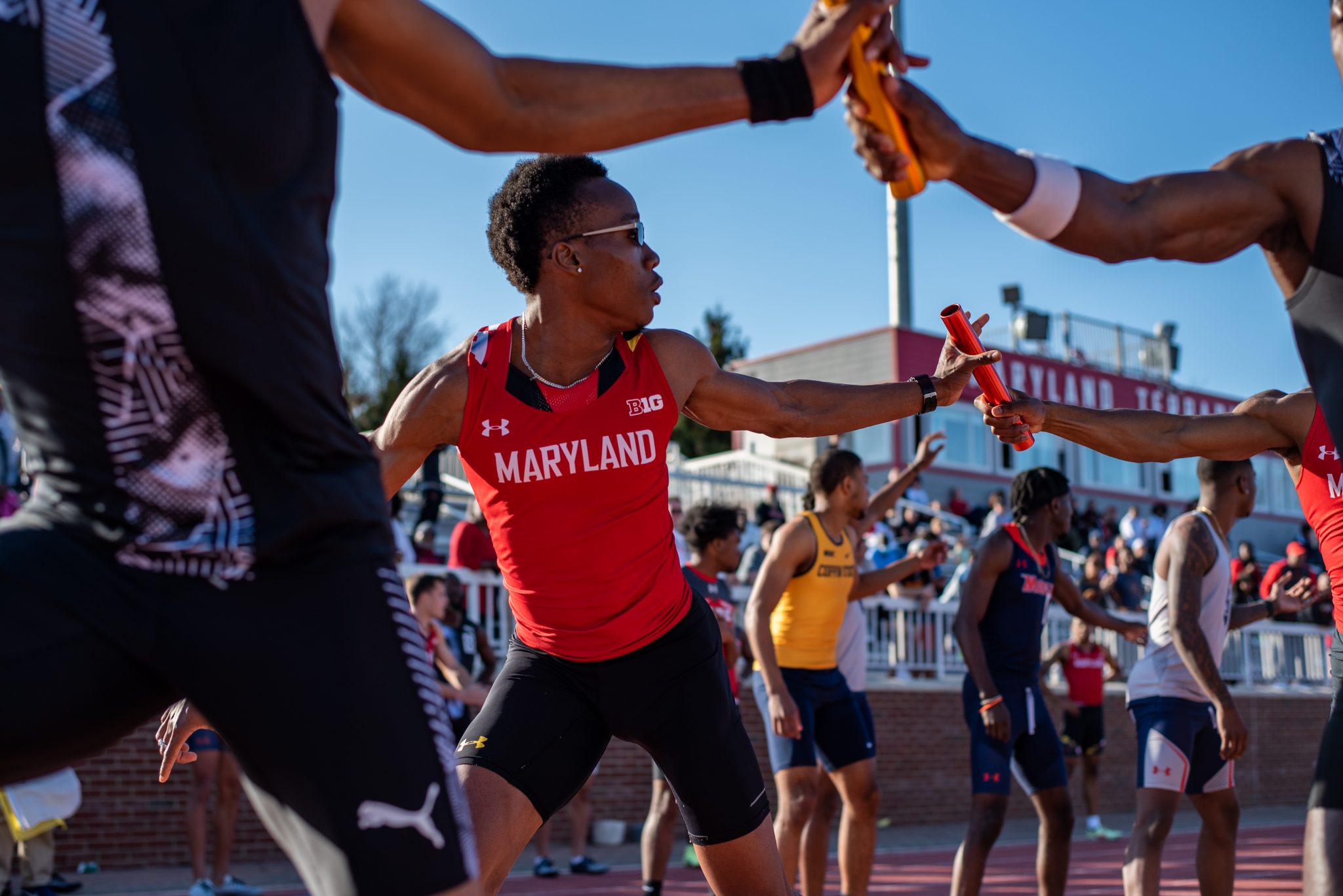 Colin Rowe takes the baton as he competes in the relay during the Maryland Invitational on March 19, 2022.(Joe Ryan/The Diamondback)

After grabbing eight first-place finishes last weekend at the Maryland Invitational, Maryland track and field sought out similar success, this time on the road.

“We’re going to hit the road next weekend and continue the momentum we have,” coach Andrew Valmon said after last week’s home meet.

Half of the team traveled to Orlando, Florida for the UCF Invite while the rest competed at the NC State Raleigh Relays. The Terps combined to bring home two first-place finishes, seven podium finishes and four personal records against a stronger field of competition than their home meet.

The first day of competition at UCF was dominated by Jeff Kline. The men’s sophomore thrower competed in both the shot put and discus throw, claiming the top spot and sixth place, respectively.

Maryland ran well on the track, too. Kattiana Ealy-Pulido finished second in the women’s 400 meter and her 1:00.45 time was the ninth-fastest in program history. Ariana Ealy-Pulido raced to a personal best in the 200 meter.

On the second and final day of competition, Maryland avenged its second place finish in the men’s 4-by-400 meter relay at the Maryland Invitational last weekend, this time winning the event.

The relay team of Eric Albright, Maxwell Myers, Colin Rowe and Solomon Lawrence ran to a first-place finish in the UCF Invite’s final event of the afternoon on Saturday.

Earlier Saturday, the Ealy-Pulido sisters competed again, this time in the women’s 100 meter hurdles. Kattiana finished fifth with Ariana just behind her in sixth. The finishes were the fifth and sixth fastest times in program history. [Maryland track and field’s outdoor season brings new goals for athletes]

Elsewhere on the track, Laurie and Albright each set new personal records in the women’s and men’s 800 meter races.

On the field, Alice Barnsdale claimed the last of the Terps’ seven top-three finishes, earning second in the women’s hammer throw with a top toss of 61.57 meters.

Maryland will be together again next weekend at the Florida Relays. Valmon is hoping the momentum from his team’s fruitful weekend sticks into the following weekend.

“We’re going to hit the road next weekend and continue the momentum we have,” Valmon said in a release.