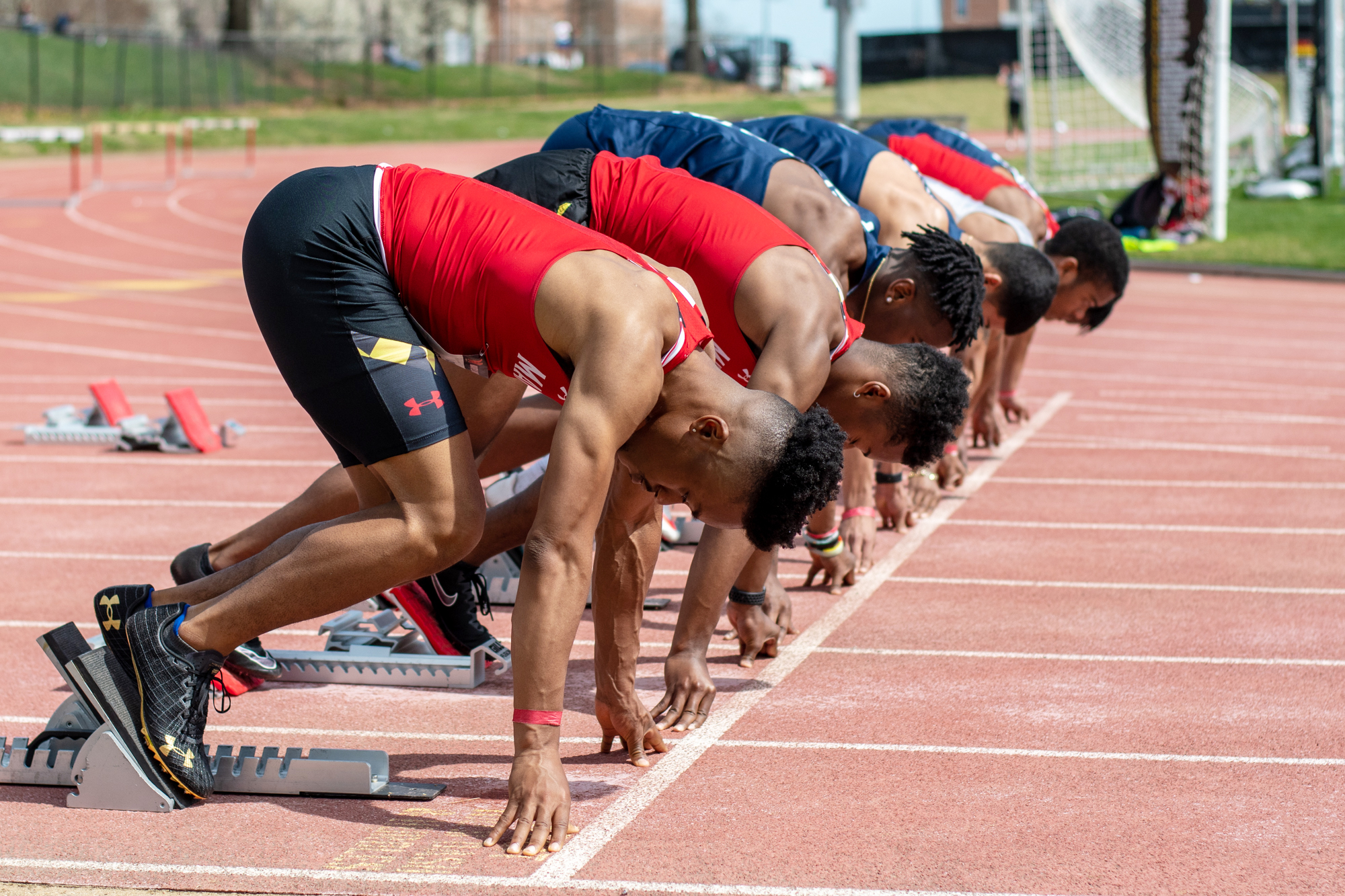 Sprinters prepare to race in the hundred meter dash at the Maryland Invitational on March 27, 2021. (Joe Ryan/The Diamondback)

On the heels of a disappointing conclusion to the 2022 indoor season, Maryland track and field now shifts its attention to the outdoor season.

The Terps failed to advance any athlete to the NCAA championships after struggles in the Big Ten championship in late February. Only the women’s team can participate in the indoor postseason — the men’s team is only sponsored to compete officially in the outdoor season, although the university permits the men’s team to compete in indoor regular season events as a tune up for the outdoor campaign.

“It’s been a long time since I’ve been that successful,” Dean said after the meet.

Nkwonta topped the program’s best mark in the women’s weight throw, beating the record she set herself in 2021.

Dean’s performance in the indoor season could be transferable, or even improved, in the outdoor slate — Dean tends to prefer running outdoors more than inside.

“I feel like I’m way better at outdoors than I am at indoor,” Dean said. “I feel like this success that I had during indoor would definitely travel over to outdoor.”

With the Big Ten limiting its schools to only competing against each other during the 2021 outdoor season, Maryland exclusively faced conference competition. Dean dominated in-conference rivals, capturing three first-place finishes throughout his sophomore season.

In the 2021 Big Ten outdoor championship, Dean placed second in the 400-meter hurdles, advancing to the NCAA East Preliminary Round. There, he took home fourth place to advance another round. After competing in the NCAA championship, Dean earned second team All-American honors and went on to participate in the Olympic trials.

Men’s thrower Jeff Kline, a freshman last outdoor season, also found success during his outdoor slate. He placed as high as second place in the shot put — he clocked a personal best throw of 18.58 meters at the Ohio State Jesse Owens Invitational. With a strong showing at the Big Ten championship, he also earned a trip to the NCAA East Preliminary Round where he competed in the shot put.

This season, Maryland has a traditional schedule. The Terps’ outdoor season kicks off at home on March 19 at the Maryland Invitational for one of only two home meets all season. The regular season also concludes in College Park with the Kehoe Twilight Meet on May 6.

Sandwiched between its home meets, Maryland will travel to UCF, NC State, Florida, North Carolina A&T and Virginia, among others — a change from last outdoor season that kept the Terps in conference.

Coach Andrew Valmon appreciates the schedule bookended by hosting meets. It gives Maryland’s seniors an opportunity to be honored at home at the regular season’s conclusion.

“It’s a great first senior night for our kids to have an opportunity for their parents to come,” Valmon said.

As the university focuses on a new complex, the program’s athletes are setting their sights on competing. Dean, now a junior, has high aspirations for the second outdoor season of his career, his freshman season being canceled in 2020.

First, he wants to stay healthy. But secondly, he has plans of etching his name in the Maryland record book yet again.

“I want to break the school record in the 60 [meter] hurdles,” Dean said. “Breaking a school record—” He paused to correct himself.

“—another school record, would be good and ideal for me.”