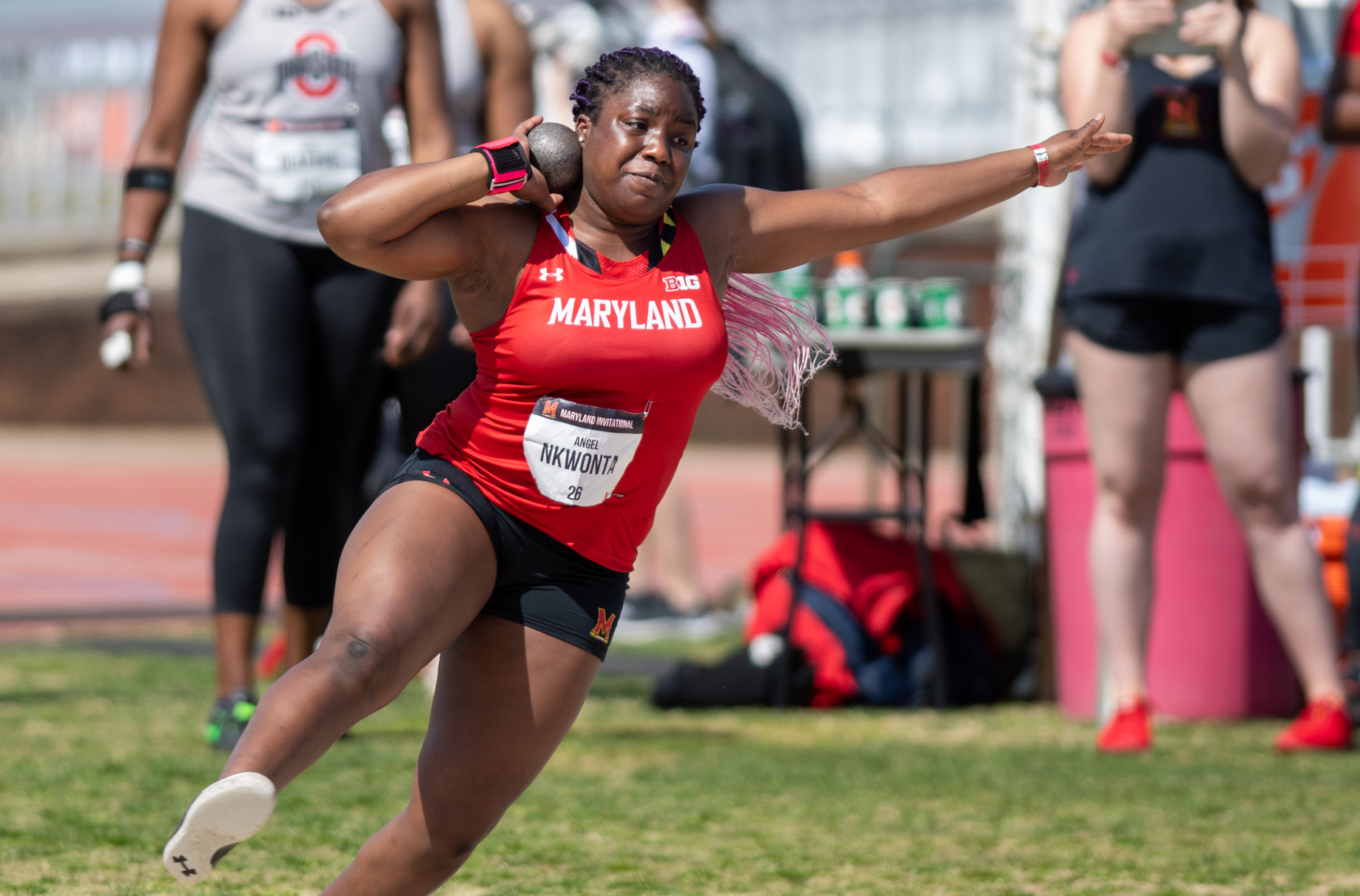 When Angel Nkwonta looks back on her six-year college career that spans across two universities, she sees someone who never expected to be where they are now.

Nkwonta is not the ideal size for a weight thrower; she has always been shorter and smaller than her peers and competition at the position. It affected her confidence early in her career and she never imagined she would be breaking records.

As she reflects on her career, the one regret she has is how it took years for the confidence to come — she wishes it came sooner.

“I went too long without accepting that I was capable of breaking records or, you know, beating people that were bigger than me,” she said. “I feel like that’s my biggest regret, not having confidence.”

A Pullman, Washington native, Nkwonta’s track and field career began when she was 10 years old. She is not the blueprint for a thrower — and she originally was not one.

Nkwonta started out as a sprinter, then began weight-throwing a few years later. Her father, Francis Nkwonta, said by the time she reached high school she was lifting heavier weights and throwing them further distances than her male counterparts.

At Pullman High School, she finished second in the state in the 100-meter dash while placing first in the shot put. Preferring the weights, Nkwonta made the decision to commit to strictly throwing moving forward. She knew there were more scholarship opportunities as a thrower, too.

After four years at the University of Washington, a handful of school records and her senior outdoor season canceled in 2020, Nkwonta entered the transfer portal with a goal of pursuing a master’s degree.

“The selling feature for us is the DMV,” Maryland track and field coach Andrew Valmon said. “We have access to Virginia, New Jersey, New York, D.C., and I think she wanted to do a graduate program and so we’re selling that part of it, the education piece, and kids are saying, ‘Hey, we do want more out of this and the DMV is a great place to be.’”

Nkwonta preferred the east coast. Her parents moved to Baltimore County just before she enrolled at Washington because her mother, Adi, found a job as a lab director at MedStar Health.

“It was very tough for us and her too,” Francis said of the distance between him and his wife from Angel.

She heard from Villanova University and Wake Forest University, among others. However, after a conversation with the Maryland coaching staff and a recommendation from her coach at Washington, she ultimately picked the Terps.

Last season saw Nkwonta place second in the shot put and fourth in the weight throw at the 2021 Big Ten Indoor Championships. A quality finish nonetheless, it left her unsatisfied and knowing a change was necessary to ensure a return and, ideally, a first place finish. Mentally and physically, she needed to adjust.

“The biggest thing I learned was … no matter how big the meet is, I can’t go in with any different mindset that I have with any other meet,” she said. “You can’t try to do anything different than you have been doing in the past and just have to trust your training that things will come together when it’s time.”

Her technique in the weight throw required a tweak. Up until that point in her entire college career, she would only complete two rotations on her weight throws. The typical number of times a thrower spins before releasing the weight is three or four.

To better utilize her rare combination of speed and power, she started practicing three turns. It was something she struggled with up until then, but was prepared to give it another try.

“I’d always just fall over by the time the third turn came,” she said. “That can hopefully give me a little more power.”

Nkwonta found immediate success with the new three-turn model. She finished the 2022 indoor season with several first place finishes in the weight throw and set the program record in the event at the Kentucky Rod McCravy Invite in January.

Nkwonta topped the mark she set herself in 2021, a perfect sign of her hard work, growth and improvement.

“She’s an iron rock,” Valmon said. “She’s lightning fast in the circle, so it looks like a spectacle when you see somebody that fast throwing that far. It’s something that people look forward to seeing … She’s kind of light on her feet and the ball just kind of flies.”

Nkwonta is out of eligibility after the indoor season concludes. She will be unable to participate in the outdoor season beginning in March. The Big Ten and NCAA indoor championships on Feb. 25-26 and March 11-12, respectively, will be her last meets.

Drawing on her own path, Nkwonta now urges younger athletes to not let their size define them.

“I would tell … the younger generations of athletes, just not to be afraid with what they want to pursue,” she said. “Maybe your size looks like you shouldn’t be a sprinter or you feel like you’re not tall enough to jump … You just need to stick with whatever you like.”

Francis also remembers the days when his daughter lacked confidence. Although he was not as surprised to see his daughter overcome the mental struggles that plagued her early in her college career because he knew it was somewhere inside of her and it just required quality coaching to get it out of her.

“This [does] not come as a surprise to me,” Francis said. “I always refer to her as small in size but big in capacity … Anything she put her mind into, she always tried to be the best. The coaches here at Maryland and the school itself helped her in reaching her goal and her highest potential.”

As she prepares for the conclusion of her track and field career, she remembers the meets where she became a coach, role model, mentor and sometimes even a comedian.

She encouraged her younger teammates to trust their training and not let the moment get too big for them, cracked jokes to keep competitions lighthearted and provided confidence when teammates otherwise lacked it.

Nkwonta does not forget the days when she was in their shoes.

“I do definitely try to instill confidence in my teammates and pretty much any athlete around me,” she said.