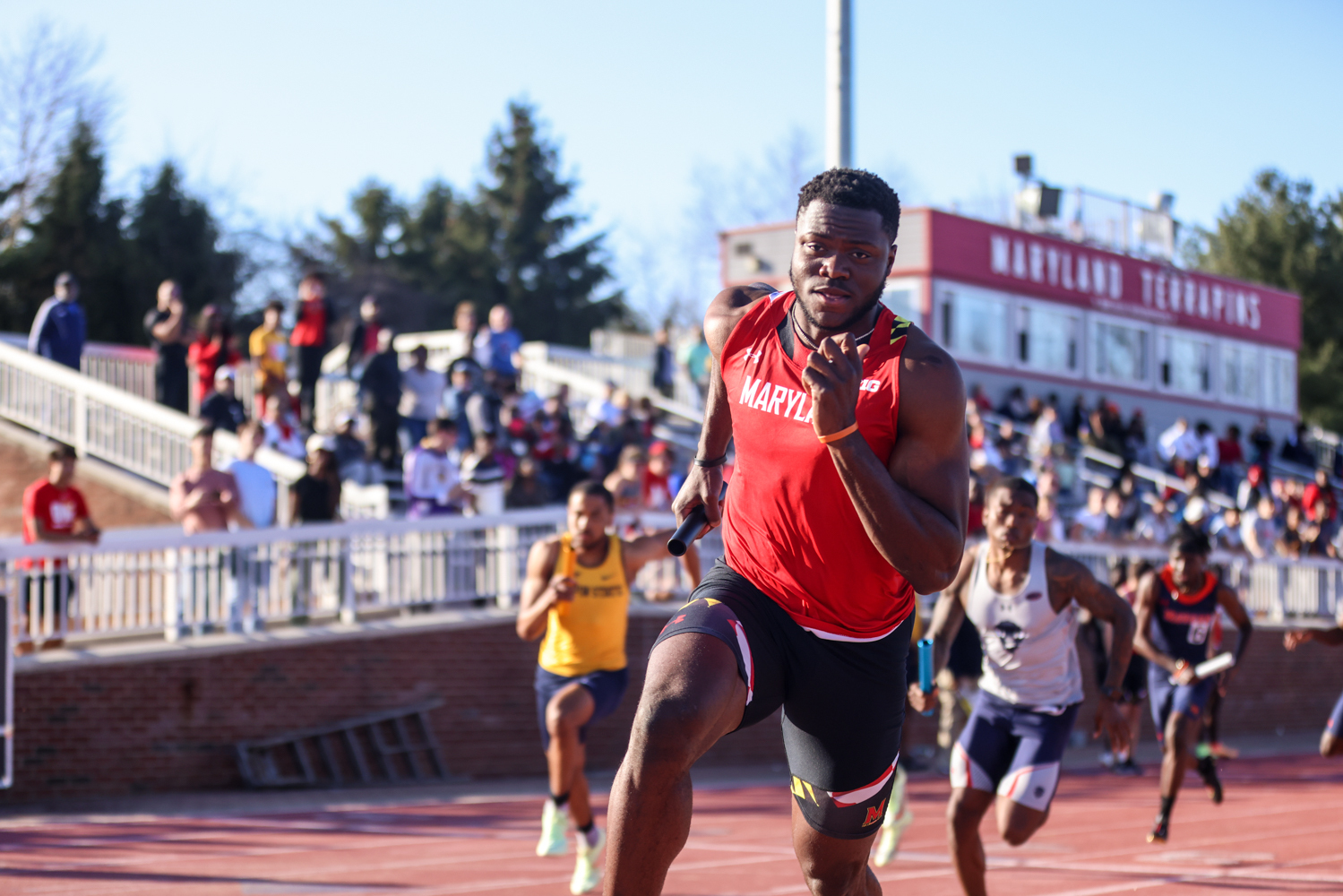 Adetomiwa Adebayo runs in the men's relay for Maryland track and field during the Maryland Invitational on March 19, 2022. (Collin Riviello/The Diamondback)

Some of Maryland’s track and field athletes prefer the outdoor season over indoor, as does coach Andrew Valmon.

Maryland only hosts outdoor meets — the entirety of the team’s indoor schedule was on the road. For the first time since last spring, family and friends of Maryland’s athletes were able to watch them compete.

Valmon appreciated the chance to “get the rust off” after the three-week break since the indoor season’s conclusion.

“This is an opportunity to compete against some of the local schools, and also get a chance to have your family and friends and professors here,” Valmon said. “It gives them a chance… to show what they can do on Maryland’s campus.”

In a meet that featured almost all local schools — UMBC, Howard, Morgan State and Coppin State, among others — Maryland found success to kick off their outdoor slate and shake off the rust. Eight Terps took home first place finishes in their respective events.

Gwendolyn Zeckowski and Matthew Bigelow led the way for Maryland to begin the day. With the field events taking place in the morning before the track events, their first place finishes in the women’s and men’s pole vault allowed the Terps to start strong.

Later in the morning, Alice Barnsdale took home the top spot in the women’s hammer throw with a 61.05 meter best toss. Kamryn Henderson finished close behind in second with a 54.03 meter throw.

Henderson and Sarah George continued Maryland’s strong showing in the field with second and third place finishes in the shot put, respectively. George threw 13.43 meters with Henderson trailing at 13.09.

Maryland also took first in the women’s javelin throw. Jessica Sutter threw to a 41.68 meter distance, the event’s best showing. Lillian Hill finished in a close second, just over one meter short of Sutter. Their throws were over 10 meters farther than the third place finisher.

Closing out the field events, Madison Depry finished second in the women’s high jump with a 1.70 meter top score. Kiaeem Thomas and Bryce Middleton competed in the men’s high jump, finishing in a tie for second place, both clearing the 1.95 meter bar.

As the clock ticked past noon, the meet shifted focus from the field to the track. There, the Terps added four more first place finishes courtesy of Emma Pegg, Solomon Lawrence, Kattiana Ealy-Pulido and Katie Altieri.

In one of the last races of the day, Altieri finished first in the women’s 3,000 meter. Teammates Anna Coffin and Christine Laurie finished seconds behind Altieri, claiming second and third place and giving the Terps all three of the event’s top finishers.

Kattiana and her sister Ariania Ealy-Pulido, racing next to each other in the women’s 100 meter hurdles in side-by-side lanes, finished third and fourth, respectively.

In the final event of the afternoon, the Terps’ men’s 1,600 meter relay A-team finished second.

“For us coming out of the gate, we were able to accomplish what we set out to do,” Valmon said. “We got what we needed.”