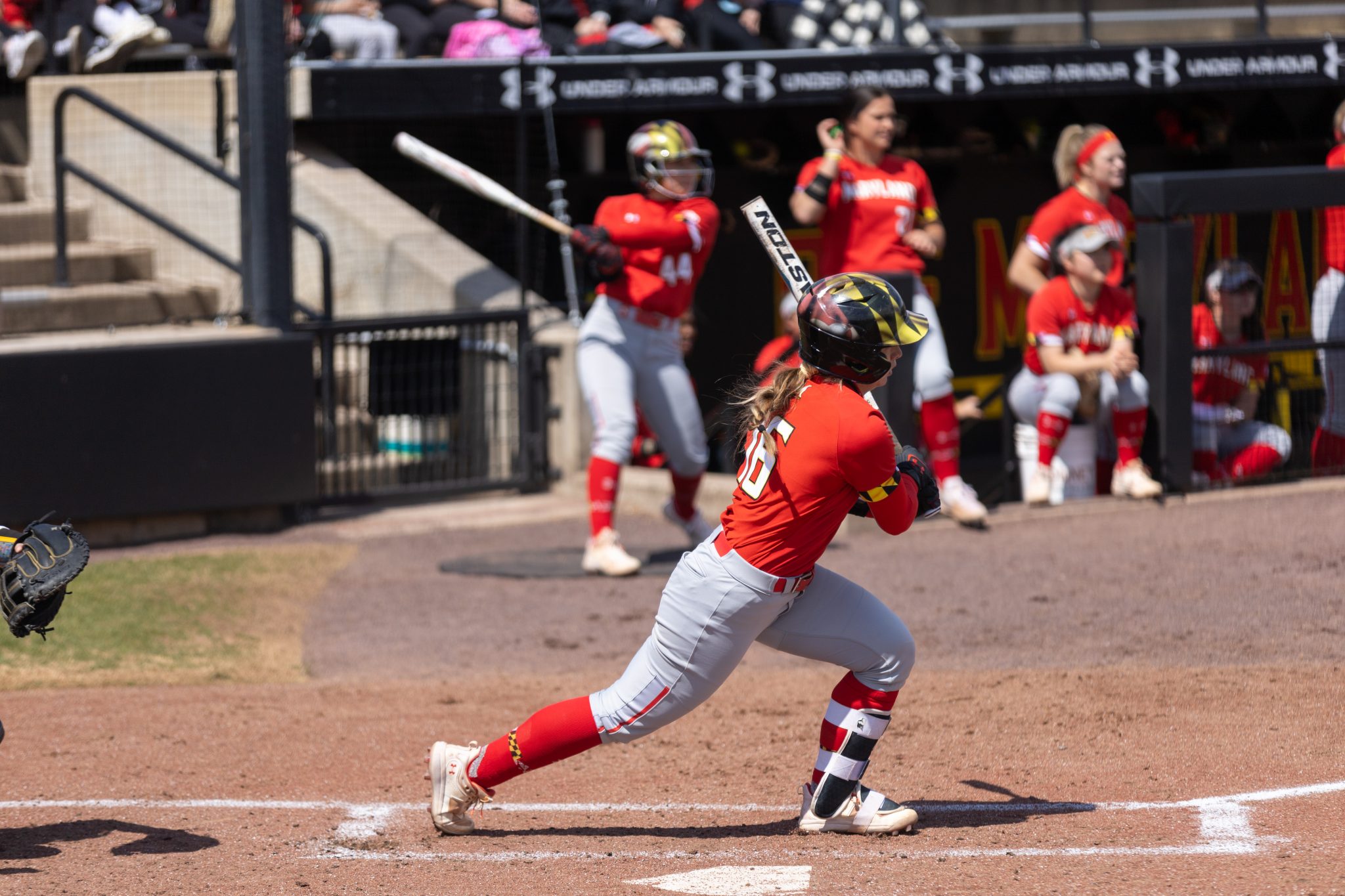 Trailing by a run, Maryland softball came to bat down to its final three outs in the seventh inning.

Kiley Goff led off with a ground rule double, kickstarting the Terps’ rally in the frame.

“It’s an exciting moment, and I know that with my dad, he’s been working with me my entire life of softball. He’s always told me that’s where you want to be … down or tied up in a game, down to your last three outs,” said Goff. “I have confidence, I trusted myself, my team, and I wanted to be in that spot, in that situation.”

Merissa Borkowski followed Goff with a single back up the middle, and later stole second to put two runners in scoring position for Katie Dustin.

Dustin made solid contact on an 0-2 pitch, hitting the ball to deep right field — a shot that couldn’t be fielded cleanly by Chloe Evans.

Evans’ error allowed Goff and Borkowski to score, giving Maryland its first lead of the game, 4-3.

“They went to a younger player, and she was a little more predictable in what she threw. We were able to narrow down the pitch selection to just a couple of pitches … so we were able to jump on her,” Montgomery said.

Courtney Wyche shut down Minnesota in the bottom of the inning, clinching the win — and the series victory — for the Terps.

Both teams started repeat arms in the series for the rubber match. Courtney Wyche started for the Terps and Autumn Pease took the circle for the Golden Gophers.

Wyche was dominant in Maryland’s game two victory, pitching all seven innings and giving up just three hits, one run and four strikeouts en route to her 11th win of the season.

After Ellee Jensen struck out to start the Golden Gophers’ hitting, two base hits and a dropped third strike loaded the bases for Sara Kinch.

Wyche looked at her dugout, got her pitch selection, and took a deep breath before facing Kinch and firing from the circle.

Kinch hit the ball a long way — sending Jaeda McFarland racing behind her. McFarland gathered under the ball and hauled it in a step in front of the outfield wall for the out. Kinch narrowly missed a grandslam, and instead, only Chloe Evans trotted home to score, putting the Golden Gophers ahead 1-0.

It didn’t take long for the Terps to join the Golden Gophers on the scoreboard, as Maryland’s bats responded only a half inning later.

At the top of the second inning with Michaela Jones on second and two outs in the frame, Kiley Goff stepped up to bat. Goff grounded one past the diving glove of Sydney Strelow into center field for a base hit, and coach Mark Montgomery waved Jones home. Jones slid in safely ahead of the throw home, tying the game 1-1.

In the bottom of the inning, Evans stepped up to bat with runners on first and second and two outs for the Gophers. Evans singled down the right field line past the glove of Mackense Greico at first. Makenna Dowell scored from second without a throw, and Ellee Jensen advanced to third.

On the next pitch, Evans took off from first and got caught in a rundown. Evans stalled Ruby Butler long enough for Jensen to race home from third, who scored without a tag attempt to give Minnesota a 3-1 lead.

Both starters settled into the game following a shaky first two innings. Neither Wyche nor Pease allowed a baserunner in the third and fourth frames.

Despite allowing just the one run, Pease was pulled for Nani Valencia in the fifth. Valencia found herself in a jam in her first inning in the circle, and was unable to work out of it without any damage.

Butler led off with a four-pitch walk, and Merissa Borkowski later reached first on a swinging bunt. After Megan Mikami grounded out to first, McFarland worked a full count walk to load the bases with two outs for Greico.

Greico took a 3-2 pitch high for ball four, bringing home Goff for the Terps’ second run of the game.

After a scoreless sixth inning, Maryland threatened to tie the game in the top of the seventh.

Goff led off the inning with a double and Borkowski followed with a single up the middle, putting runners on the corners with no outs for Katie Dustin.

“We thought Katie was a great matchup for that particular pitcher so when we got runners at second and third [with] a chance to drive them in, we put Katie in and she delivered,” said coach Mark Montgomery.

Dustin drove Goff and Borkowski home thanks to a misplay in right on her sac-fly, putting Maryland ahead 4-3.

Wyche went back out in the circle in the bottom of the seventh, and got the final three outs of the game for the complete game win.