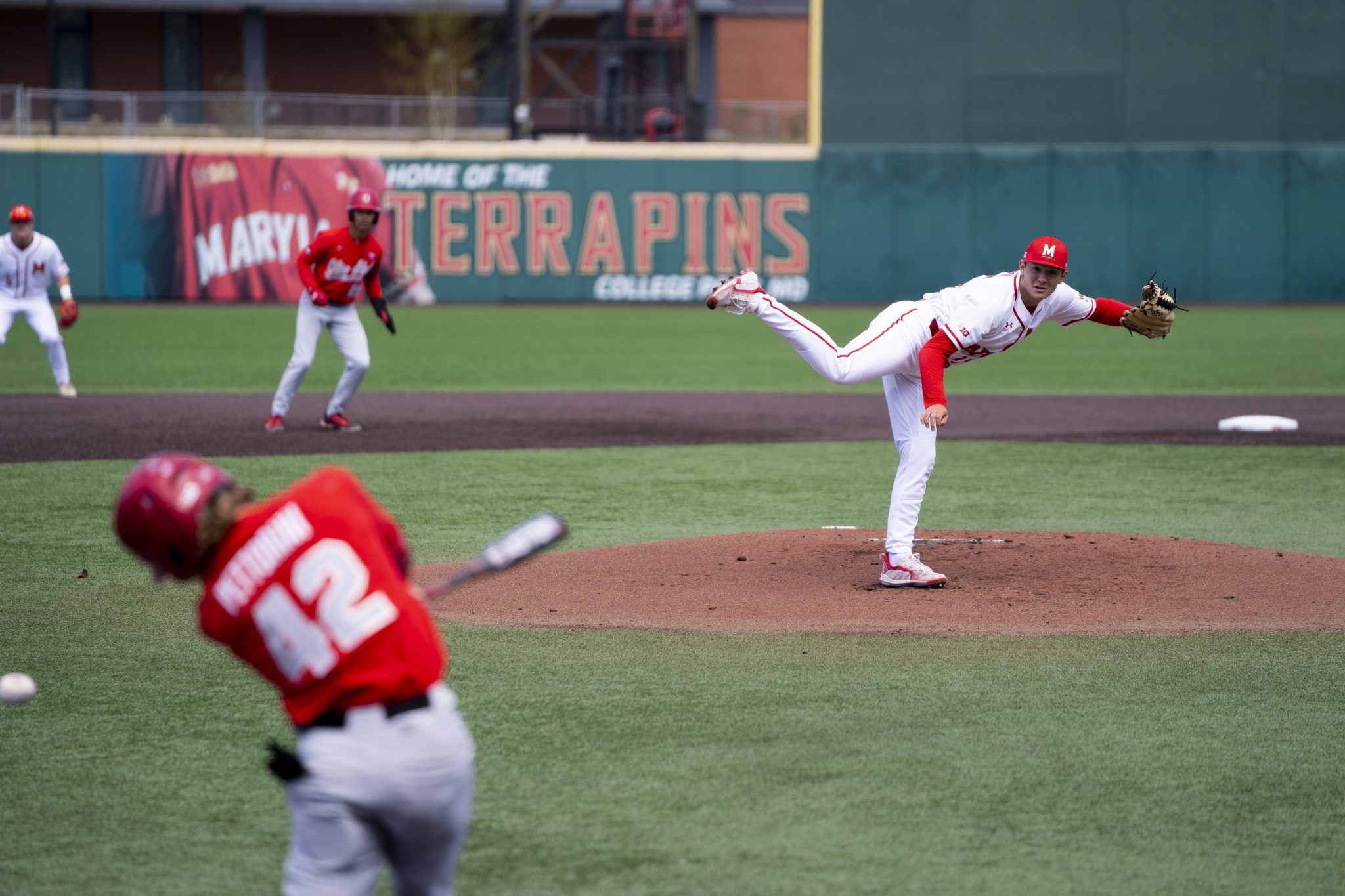 Jason Savacool blows a pitch past a batter in Maryland baseball’s 16-1 victory over Ohio State on April 17, 2022. (Taneen Momeni/The Diamondback)

As Maryland searches for the elusive right to host games in the NCAA tournament, it felt obvious that they’d desperately need to dominate Big Ten competition.

In two tries against Penn State and Minnesota to sweep the series, the Terps missed the mark, making their third attempt against Ohio State crucial.

The Buckeyes put up a valiant fight in the first two games — both requiring late-heroics from Maryland to grab the win.

But today the Terps left nothing to chance.

With the 15-run win, Maryland baseball tied the largest margin of victory in a Big Ten conference game.

“That’s probably the most complete game we played in a really long time,” coach Rob Vaughn said. “We were really good with two outs from the offensive standpoint. You give Jason Savacool the lead and it was like sharks smelling blood in the water.”

Starting thrower Jason Savacool dominated — throwing seven shutout innings while striking out seven batters. The steady performance assisted an offense that flamed hotter and hotter as the outing wore on.

“[Savacool] was outstanding,” Vaughn said. “Gave us a great start, which is huge because we really taxed our bullpen the last two days with some of our high-leverage arms. Turn around and play again on Tuesday… can dip back in the [bullpen].”

Savacool’s first inning wasn’t his best. He allowed a single on a fast grounder on the first pitch of the game and then wandered outside of the strike zone, hitting a batter and walking one to load the bases with two outs.

“In the first inning the two-seam wasn’t as good as it usually has been, so I just made an adjustment there and got it back on track,” Savacool said.

However, he cleared the jam as fast as he created it, forcing the third out on a chopper that he fielded and tossed to first. After a fruitless bottom of the first where the Terps went down in order, Savacool clearly found his groove.

The sophomore pitcher racked up a pair of swinging punch-outs in the second inning by throttling pitches into the zone — racking up a pair of punch-outs.

In the bottom of the second, Maryland’s offense reciprocated.

The sophomore pitcher racked up a pair of swinging punch-outs in the second inning by throttling pitches into the zone before Maryland’s offense came alive.

With a pair of runners on, an 0-2 count, and two outs, Kevin Keister couldn’t stand to be cautious. The second baseman whipped a low-curve and carried it to the left-center wall as both runners scurried home for a quick 2-0 Maryland lead.

With that early lead and Savacool rolling, the game departed from the first two of the series. Instead of a back-and-forth affair, it became a test of Maryland’s ability to close out a series in dominating fashion.

Chris Alleyne, who substituted in for Zach Martin and moved to his centerfield spot, looked to build the Terps’ advantage as he squared up to bat in the fourth inning. He smashed a sinker into left-field that helped score Bobby Zmarzlak and Keister and extend the lead to 5-0.

Zmarzlak’s two-RBI double in the fifth inning further reinforced the Terps’ lead as Ohio State hurriedly switched pitchers in the next frame to find an answer for a renewed Maryland batting lineup.

“I didn’t feel like they turned it off at all today,” Vaughn said. “I thought they stayed with a really steady attack and we were just really, really good all-around today.”

Matt Shaw made the pitching changes irrelevant, rocketing a ball to the top of the right-field fence and bouncing it over. His home run scored three and delivered a statement: there would be no more drama in a tumultuous series between the Terps and the Buckeyes.

Maryland didn’t hold back in the seventh inning either, piling on five runs behind a flurry of hits as Ohio State’s relievers faltered.

“Today, we really put it all together for the first time all year and the scoreboard really showed it,” Ian Petrutz said. “Good Ohio State team, a sweep and a 15-run game, so definitely good.”