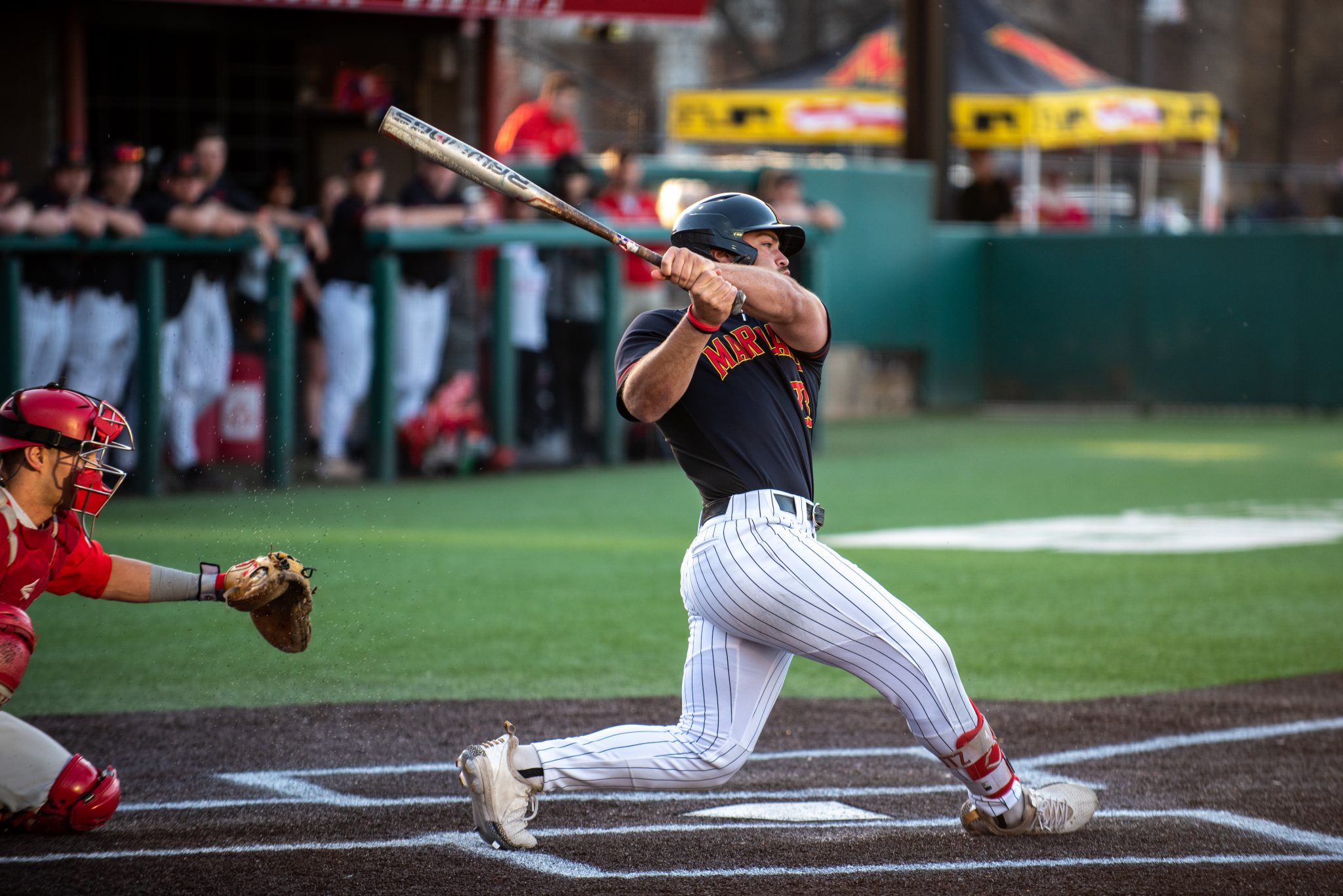 After a decisive start from the Terps, Ohio State slowly sucked momentum from Maryland until it faced a do-or-die situation in the bottom of the ninth, down one run.

With two runners on and no outs, Bobby Zmarzlak grabbed the plate. Then he delivered a shocker. Jolting energy throughout the Terps’ home-crowd, the junior clobbered a pitch over the center-left wall, walking off as his teammates flooded the field.

“I was looking for a curveball out over the plate,” Zmarzlak said. “That was the one. Thankful I got it.”

Luke Shliger smashed the opening pitch up the center of the diamond as Maryland racked up multiple hits in the opening inning, steadily exposing Ohio State thrower Nate Haberthier.

“Definitely just attacking the first pitch,” Nick Lorusso said. “We came in knowing he likes to throw a lot of first pitch fastballs and that’s kinda what we got.”

The scoring didn’t start from the traditional power hitting the Terps have flaunted all season.

With two runners aboard and Chris Alleyne peering down the line from third, Max Costes chopped a ball to the left-infield and hustled down the line.

The soft crack easily crossed Alleyne and gave way to a Zmarzlak slam to center that grabbed another run. The Terps weren’t done.

“Just battling all game. Our hitters did a great job of that,” Lorusso said.

Kevin Keister supplied a similar scoring single as Costes to cap off a trio of runs for Maryland in the opening inning.

While a flurry of hits and heavy bounces helped the Terps to an early lead, Ohio State needed just two pitches to largely erase Maryland’s advantage in the second.

With two away, Blayne Robinson stepped in the box with the sun shining on the first base line — casting long shadows on Bob ‘Turtle’ Smith Stadium. On Terps pitcher Nick Dean’s first attempt, Robinson turned viciously on the ball, smashing it hard to right-field.

Right fielder Troy Schreffler sprinted and met his shadow against the wall as the ball coasted over. The next pitch had the same result, as the Buckeyes’ Mitchell Okuley rocketed Dean’s next pitch well over the tall centerfield wall.

“[Dean] was good,” Vaughn said. “The starter’s job is to give us a chance to win [and] those guys put up crooked numbers on a lot of people, that offense is explosive.”

Ohio State only managed the back-to-back slugs in the inning, but the Buckeyes’ effort to respond indicated that the game looked to be no pitcher’s duel.

That sentiment was reinforced as both squads exchanged runs in the third and Haberthier began to unravel further, with Maryland putting multiple runners on base in the fourth.

Costes then whacked a high flyball to shallow center for plenty of Ohio State fielders to peer at. One settled and looked ready to make the play before wavering and dropping the ball.

Alleyne snatched third as the ball got away again — allowing him to dive home and touch the outer edge of the plate as the Buckeyes’ catcher Brent Todys missed him.

The two-run lead held until an RBI out from Ohio State in the sixth made it 5-4 through a steady seventh from Terps reliever Noah Mrotek and Buckeyes’ T.J. Brock. The eighth wouldn’t see much of the same.

A hit-by-pitch and a walk helped the Buckeyes land the tying run as Mrotek unraveled and quickly retired from the mound with Sean Heine taking his place.

More pitching troubles ensued as Heine did much of the same, walking and hitting a batter. David Falco came in to end the inning, but not before the Buckeyes took the lead on an RBI walk.

“Heine’s been our savior this year,” Vaughn said. “That’s our go-to dude and [he] just didn’t have it tonight.”

Maryland failed to respond as the ninth frame would be the decider. The Terps boarded two runners quickly, and Zmarzlak sent them home with the game-winning three-RBI homer.

The Terps landed their 27th win in thrilling fashion.

“A night like tonight [is] a night that Bobby will remember 30 years from now,” Vaughn said. “Really happy for him [and] for our team.”