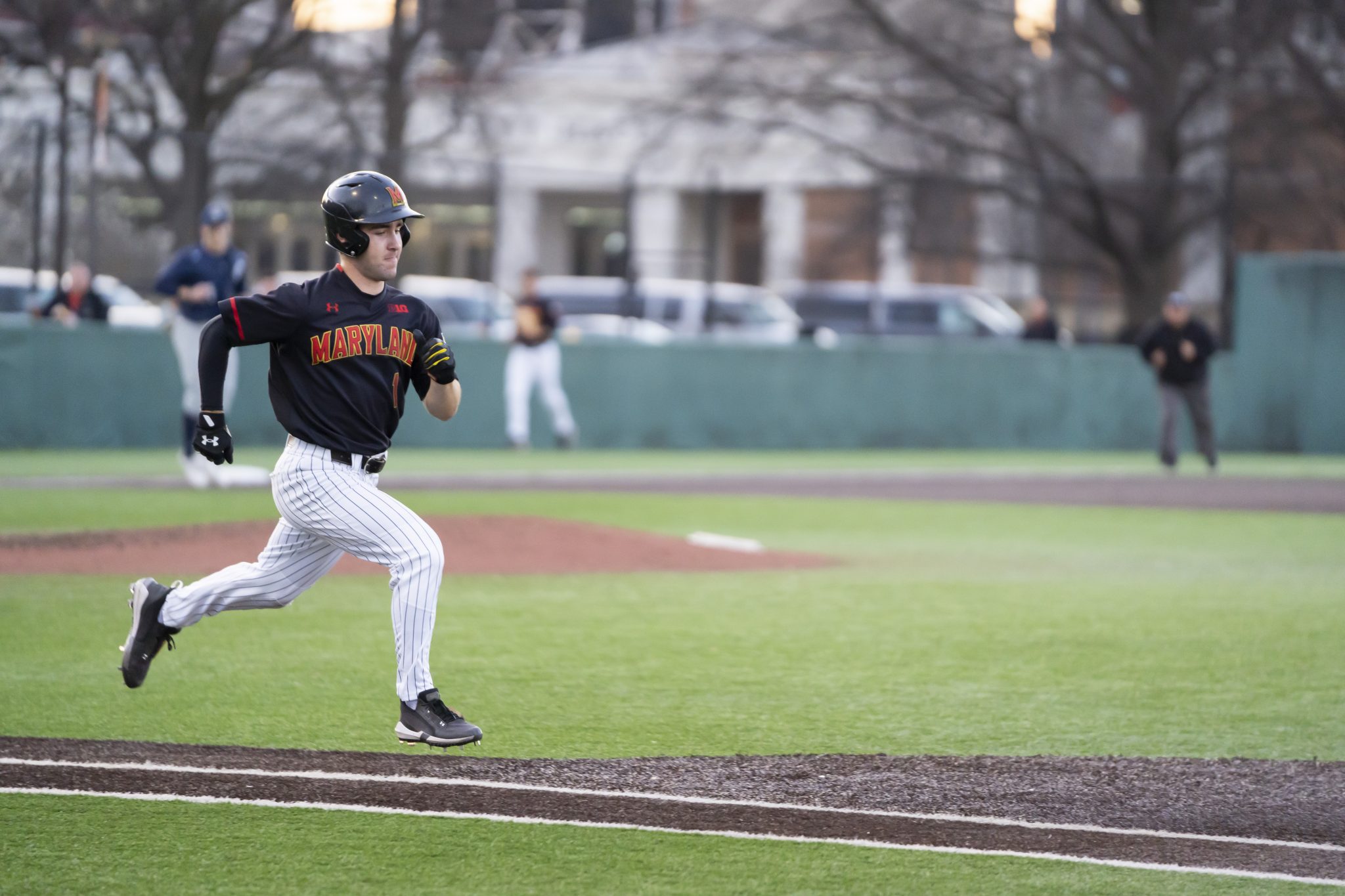 Jacob Orr hadn’t had an at-bat in weeks.

With an open lineup slot, he slotted in and showed no sign of rust during Wednesday’s game, including rising to the occasion in a key eight-inning opportunity.

The freshman rocketed a crucial two-RBI single to grab an important tie that set up Maryland’s veterans at the plate in the top of the ninth.

Chris Alleyne led off the final inning and gave the Terps a lead with one swing, grabbing the winner and making sure every one of Orr’s team-high five RBIs came in a winning effort.

Propelled by youth and finished by experience, Maryland baseball stole the victory from James Madison on the road, 8-7.

“I thought very honestly that’s the best we’ve played offensively in a really long time,” coach Rob Vaughn said. “We scored eight, [got] the season-low in punch-outs with three today.”

With both teams missing significant players — Maryland with Matt Shaw taking a day off and James Madison with top MLB prospect Chase DeLauter recovering from a recent broken foot — both squads looked to their new lineups for offense.

The Terps’ new-look lineup — which featured underclassmen Orr, Ian Petrutz, and Kevin Keister — slogged through the first two innings, allowing the Dukes to jump on the Terps early.

Logan Ott threw a clean first inning before stumbling in the second, giving up three runs despite being one out away from exiting the frame.

With a runner at second, James Madison’s Mason Dunaway kicked off the two-out rally by slapping an RBI single to right and setting up a surprising early deficit for the Terps. The next batter, Jason Schiavone, piled on by smashing a two-run homer to left to snatch a three-run lead over Maryland.

Ott allowed five total runs in just 2.2 innings, the second straight appearance that he’s given up at least four runs.

The Terps attained some unexpected help from the bottom of their lineup in the third inning.

Petrutz — the eighth hitter in the order — shot a lead-off single to center to rejuvenate Maryland. Orr followed by cranking a double to left that scored his fellow freshman. Luke Shliger joined in with a single of his own to advance Orr to third before Alleyne brought the second baseman home with a sacrifice fly.

“Ian’s gonna get a ton of hits here at Maryland…for him to come out and have a good night was really big for us,” Vaughn said.

While a double-play quickly silenced the rally, it was not the last time Maryland saw a significant contribution from the two freshmen.

After Ott gave up two more runs in the bottom of the third, the Terps’ first-year duo struck in the fourth.

With two outs and runners at first and second, Petrutz took the plate again as Maryland desperately searched for a response against the surging Dukes. Petrutz found it, slotting a single up the middle that loaded the bases for Orr.

The second baseman knocked in a pair of runs with a single before Shilger smacked a game-tying double to right. Despite four errors by the Terps’ defense, they kept pace with the James Madison offense.

After the Dukes broke the tie in the bottom of the fourth on a botched throw to second by Shliger on a steal attempt, both squads settled back to earth.

They did the job in the middle innings until a walk and hit batter from Nigel Belgrave alarmed Vaughn enough to pull him for Sean Heine in the seventh. Heine got Maryland out of the jam, but Dukes padded their lead as an inherited runner scored on a wild pitch.

“I thought our bullpen was really, really good,” Vaughn said. “We gave up five early and then everyone came in and did their job.”

And it found Orr as the protagonist. He clobbered a massive two-out, two-RBI single to center, reigniting a stagnant Terps offense that tied the game at seven.

While Maryland managed little else, Heine struggled early in the bottom of the inning and it looked as if the Terps’ rally would mean little as a pair of runners quickly climbed aboard.

Vaughn grabbed Heine and pushed Dave Falco out onto the mound, the sixth Maryland pitcher on the day. The redshirt sophomore worked out of it with two straight outs to retain a crucial tie.

“I think Dave really gave us all the momentum that we needed to go out and close that game out,” Alleyne said.

Maryland needed something to keep up with the Dukes. And in the right spot, Orr and Alleyne provided it as the Terps cruised the rest of the way with a clean closing performance from Falco.

“We don’t win that game today without that performance from Jacob Orr,” Vaughn said. “Just a really good team win all-around, didn’t play clean-enough defense and made it hard on ourselves but these guys fought really really hard.”