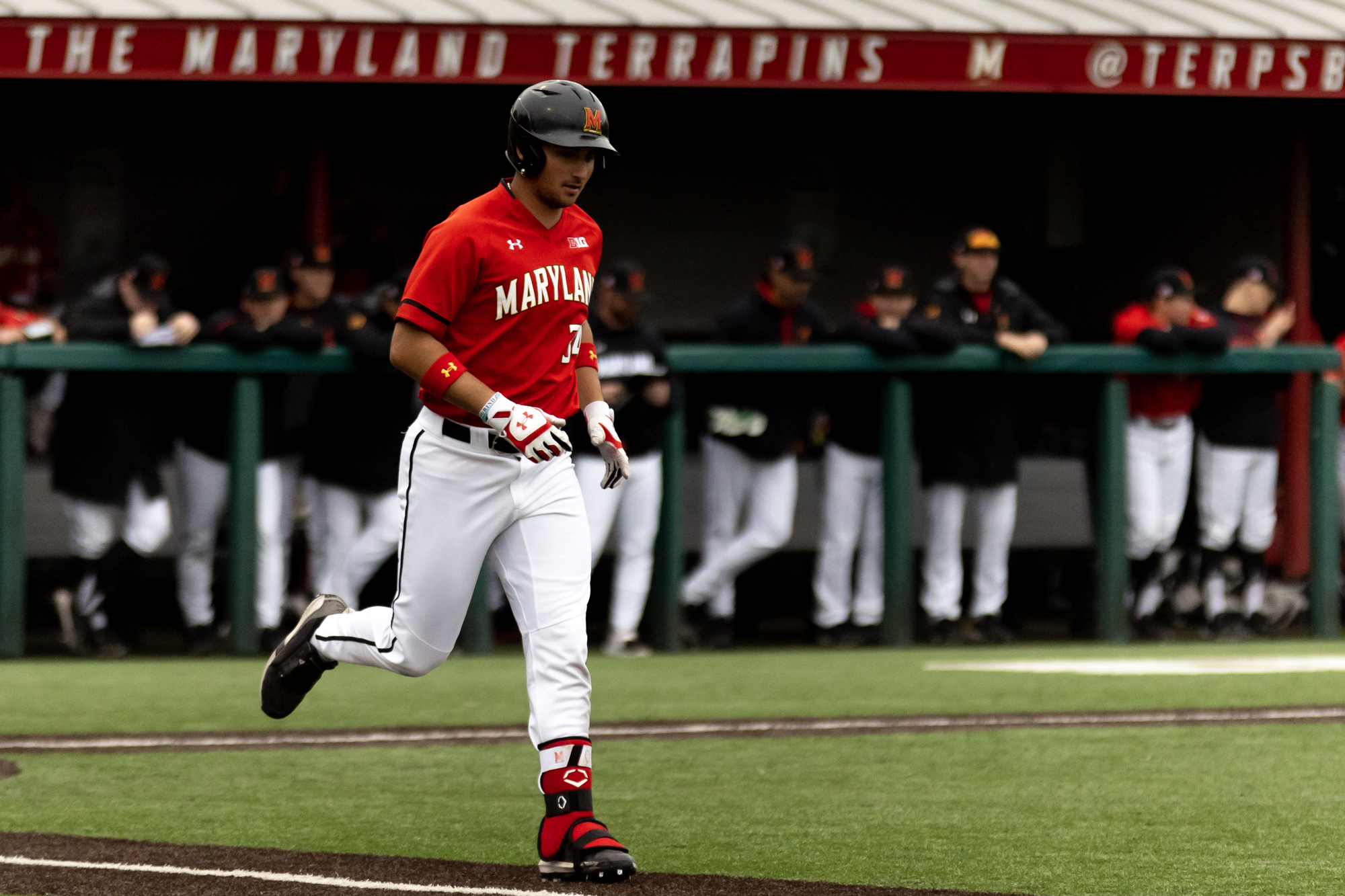 Nick Lorusso jogs toward first base during Maryland baseball's 8-5 win over George Mason on April 5, 2022. (Julia Nikhinson/ The Diamondback)

Nothing went right for Maryland baseball.

A blip by starter Jason Savacool put them down a couple early, a couple of missed dives helped runners advance, and a fateful pitch skipped by home plate to cross the killer.

It wasn’t a brooms-out day for the Terps as Minnesota grabbed the lead and ran with it to the conclusion.

One look away, and you might’ve missed something as Maryland baseball fought through the early frames in an attempted sweep of the Gophers. Exciting moments came abruptly as Savacool grabbed the mound for his first inning of the day.

An opening single to left, Savacool may have had one bad pitch. A double to left that scored the runner, maybe a bad start for him. Then after a groundout to score the lone runner — something looked wrong.

The trainer checked on the sophomore and he continued, ending the first frame on a fielder’s choice. But the bad start had the Terps buried 2-0 in a flash.

“The mound was really steep, a little steeper than he was used to and just tweaked his leg a little bit,” coach Rob Vaughn said. “He held his velocity. He was 91-93 [mph] all game and said he felt good. Certainly didn’t affect his outing.”

Matt Shaw led off the second with an opening single and later crossed home on a Troy Schreffler two-bagger as Maryland cut the Gophers’ lead in half. The match became even more polarizing as Schreffler stole third, and Minnesota coach John Anderson didn’t agree with the call.

Anderson was ejected from the game, but Schreffler would be stranded anyways as two Terps punched-out in a row.

“I think we had five or six times where we got guys in scoring position and the chips just didn’t fall our way,” Max Costes said.

The quick response likely alleviated Maryland’s early fears. As did a pair of strikeouts at the bottom of third by Savacool. The pitch that ended the inning — a diving curve that left Minnesota’s Jack Kelly swiping air as he struck out — was encouraging.

After leaving a pair of runners on-base for the fourth, Maryland trotted out Savacool again for his third and fourth straight punch-outs. But a six-pitch walk and a long ball to left-field left Chris Alleyne scrambling and diving in vain as the ball got away from him and Bobby Zmarzlak.

A runner crossed as Minnesota took a 3-1 lead without any clear signs of a momentum shift.

The Terps would have to wait for right-hander Aidan Maldonado to take his leave after hitting the century mark on pitches at the end of the sixth. The junior only earned a single run and struck out five despite seven hits from Maryland to threaten on several occasions.

“Maldonado had really good stuff today,” Vaughn said. “[It] was a mid-90s fastball, really good breaking ball. He was good and I thought we set up innings against him.”

After a Michael Bouma groundout, Kevin Keister walked on five pitches. Luke Shliger poked one to right and the table was set.

Alleyne smashed a ball into the right-field gap for an RBI and Nick Lorusso dropped another to deep-left to tie it up. For Maryland baseball, it was better late than never.

A spectacular falling-double play to end the seventh by Savacool capped off the inning, and the Terps had every indication that this one was its to lose.

That was until Brady Counsell chugged all the way to third base after a diving Schreffler came up empty, giving him ample time to move. Then, Shliger let a pitch by him.

Counsell took home. And Maryland found themselves blanked in the top of the ninth by reliever Tom Skoro as it dropped its series finale against the Gophers.

“The difference in baseball is it doesn’t matter if you play better overall,” Vaughn said. “It matters who plays better in the moments that really matter. And they were better than us in that situation.”