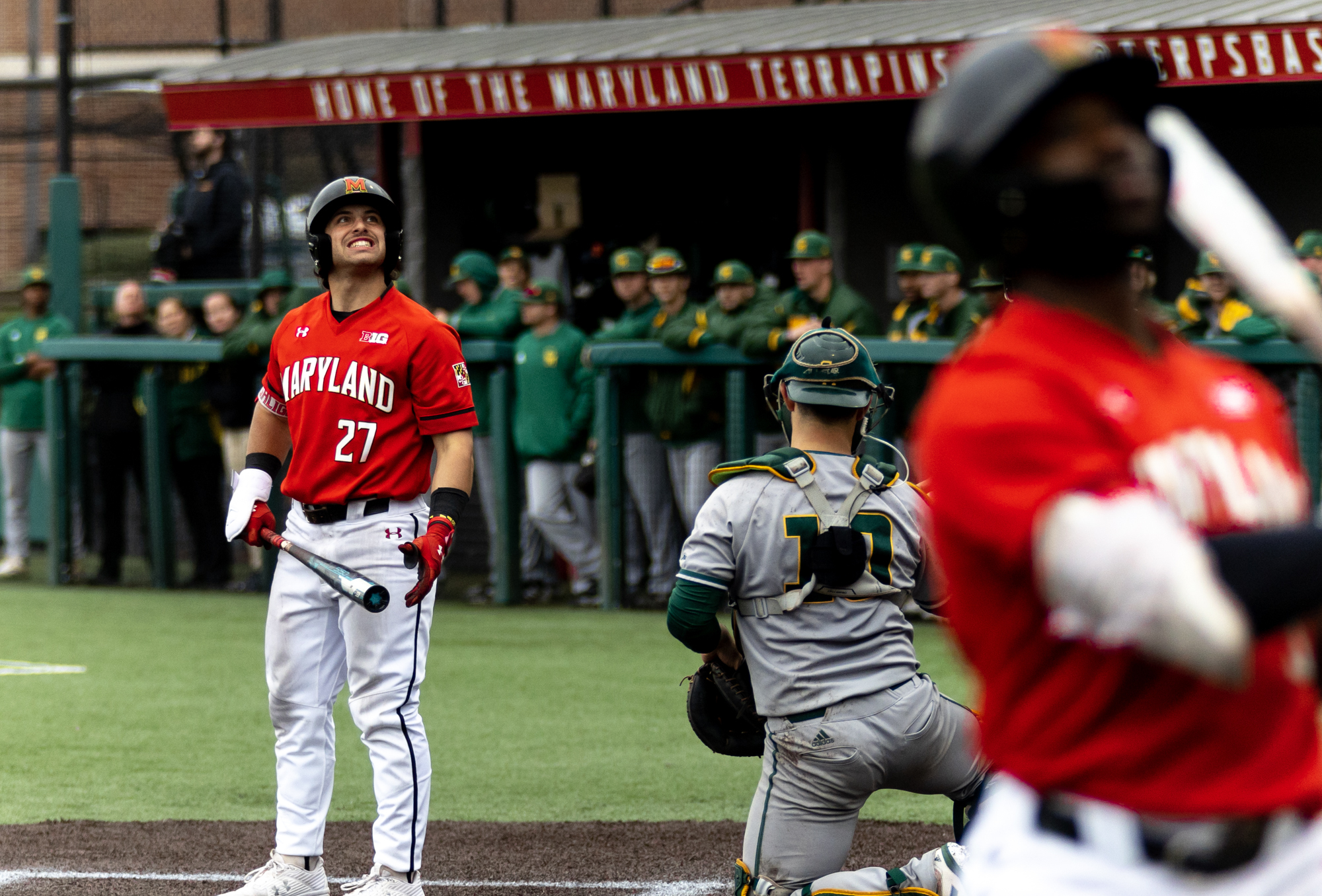 From the first pitch, everything carried for the Terps.

A variety of hits flew through the air on a windy day in Minneapolis— opposite-field whacks, center-field slugs, line drives that carried and pop-flys that took a ride on the swirling wind — and the win, like many driven pitches, stood in little doubt.

Powered by a slew of homers, Maryland baseball cruised past Minnesota, 11-7.

Luke Shliger wasted no time putting his team on the board.

Smashing the first pitch from Golden Gophers’ thrower Sam Ireland, Shliger took a home run trot early to thrust the Terps out to a one-run lead. Ireland’s mishaps didn’t end there — a hit-by-pitch, a single and an error loaded the bases.

Then, the Gophers caught a break. Landing a double-play that prevented a score, Minnesota saved itself from being buried early. Troy Schreffler grabbed an RBI double soon after to solidify an early lead that wasn’t as significant as it could’ve been.

[Transfer Nick Lorusso is making his mark on Maryland baseball]

Nick Dean shared some frustration with Ireland. The Gophers’ second at-bat saw Dean’s pitch rocketed to left for a solo homer to halve the Terps’ lead before an RBI single tied it up.

Both pitchers settled after the first frame, throwing scoreless innings in the second and third until the fourth brought more hitting theatrics. The tie didn’t last long.

Cracking a pitch off the end of his bat, Bobby Zmarzlak cranked a two-run homer to right for another lead change. After two Terps got out, Chris Alleyne faced his own chance to join the power club for Maryland.

And his slug might’ve been the prettiest of the few.

Alleyne’s hit carried with the rest of them and crossed the fence for Maryland’s second two-RBI homer of the inning. At 6-2, with the offensive capability the Terps had shown on the day, it didn’t seem like they would have to look back.

Despite Maryland’s decisive lead, Minnesota added another run off an RBI single in the inning as it attempted to keep pace with the Terps. Dean’s arm was revitalized as he racked up clean innings the rest of the way.

His play on the day leaned towards inconsistent, even though his latter pitching was key for Maryland. Noah Mrotek grabbed the mound from Dean — his day ended with six innings pitched, six strikeouts and three unearned runs.

A bomb from Nick Lorusso preceded Mrotek’s closing stint and Maryland led 8-3 with the freshman on the mound. And Mrotek gave the Gophers a shot.

Allowing his two opening batters to cross the plate, Mrotek gave Minnesota hope as the Terps’ lead dwindled behind the freshman.

That rally was quickly cut short as Matt Shaw laced the Terps fifth homer of the game in the eighth inning and another pair of runs scored later on to make Maryland’s win a foregone conclusion.

At least, until a two-RBI slug crept Minnesota back into striking distance in the ninth frame. As Nick Robinson faltered, the Terps were forced to put in one of their best relievers in Sean Heine.

Heine initially struggled, throwing six called-balls straight at one point, but grabbed the final out to advance the Terps to 24-6.