Transfer Nick Lorusso is making his mark on Maryland baseball 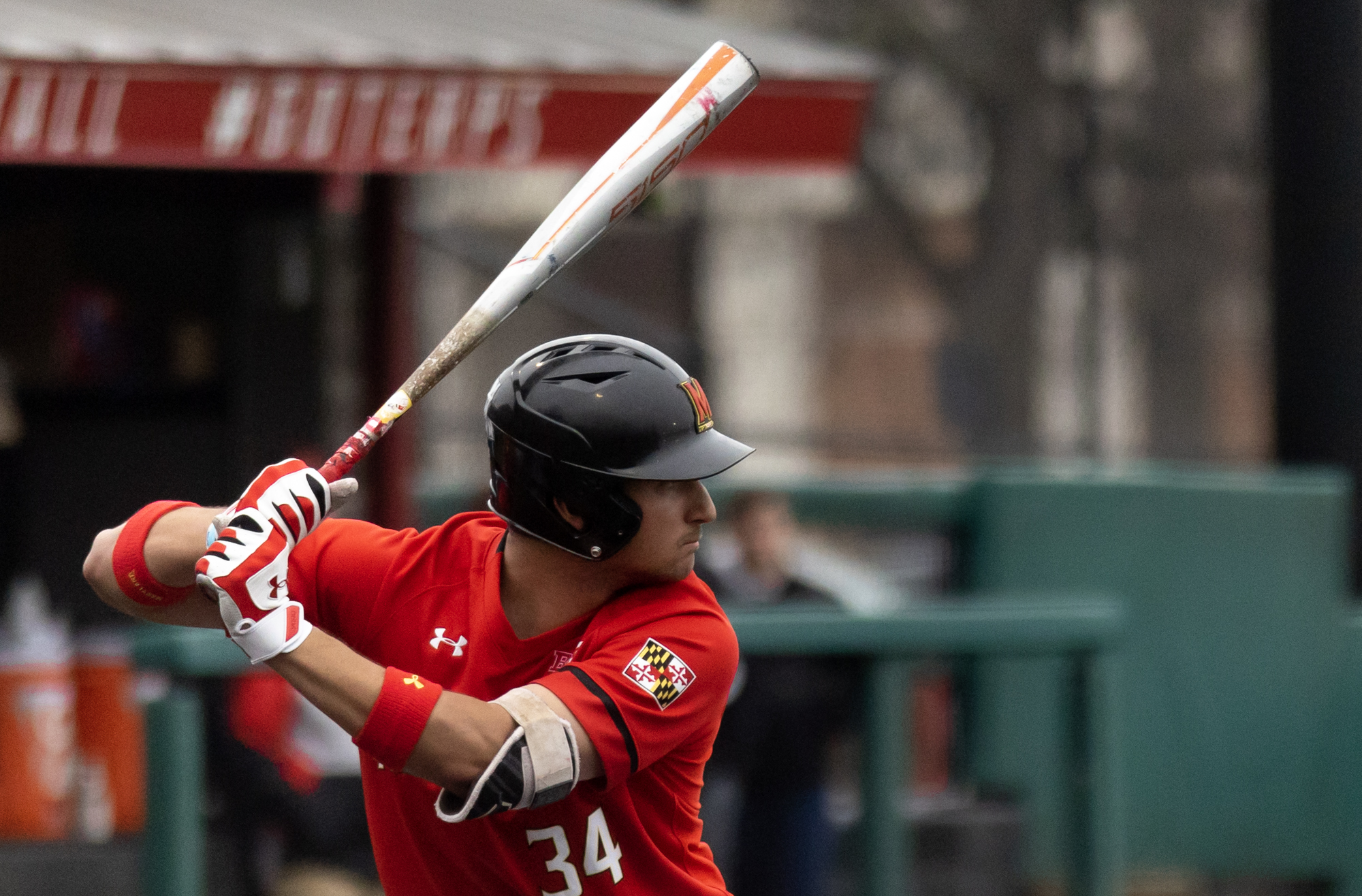 Third baseman and right-handed pitcher Nick Lorusso has flown under the radar as Maryland baseball has raced to a 23-6 start. His value has shown more than ever in the Terps’ last four games and has earned Lorusso Big Ten Player of the Week honors.

Previously, he was one controversial call away from potentially cracking a game-winner.

Sitting in the on-deck circle, Lorusso was one batter away from a bases-loaded situation with two outs. Chris Alleyne caught a pitch to his elbow pad and turned to take his stroll to first to give Lorusso the chance to jam the bases.

Penn State catcher Matt Wood stood up, pointed at Alleyne’s elbow and appealed something to the umpire. The umpire then raised his hands and pointed downwards to pause Alleyne’s walk.

The Nittany Lions remained on the field. Alleyne walked back as the umpires congregated and eventually coach Rob Vaughn came out to receive his explanation. It wasn’t the one he wanted.

With Lorusso still lingering in the on-deck circle, Vaughn blew up at the umpires as his team was forced to evacuate the field and lost their shot at victory. Vaughn had even more reason to be furious as the transfer from Villanova who sports a .300-plus batting average lost his chance to take the plate.

“He’s the guy with the game on the line,” Vaughn said. “It’s why I was so fired up about the hit-by-pitch with [Alleyne] the other day because that’s Nick Lorusso coming through in the bottom of the ninth with two outs and the bases loaded. I’d put my money on him.”

But despite Lorusso’s missed opportunity, the transfer’s red-hot streak has him racking up numbers to the tune of 15 RBIs and two homers in the past six games. Lorusso has significantly outscored the rest of the Terps’ lineup.

And it couldn’t have turned out much better. With Benjamin Cowles leaving for the major leagues after last season, Maryland had a big offensive hole to fill.

“We knew [going into the offseason] that if the right infielder pops up on [the transfer portal], we could use an extra guy because we weren’t anticipating [Cowles] leaving,” Vaughn said.

Luke Shliger and Bobby Zmarzlak played travel baseball with Lorusso in high school and the former Villanova player recognized the fit. Maryland filled a need and Lorusso grabs fresh air at a spot he’s likely to get playing time.

“I had two of my travel buddies, Luke Shliger and Bobby Zmarzlak here, so they were definitely comforting in that whole process,” Lorusso said. “I feel like this team has that brotherhood that some other programs don’t have.”

And not only has Lorusso slugged admirably so far, he’s contributed on the mound. While his stats don’t look particularly impressive (7.56 ERA), the junior’s performance against Georgetown on March 11 likely earned Maryland a win.

Closing the final three innings in relief, Lorusso opened the door for the Terps to walk-off with five unanswered runs in that span. In a situation where Maryland had previously struggled with its bullpen depth due to injuries, Lorusso stepped up when needed.

And now, with the Terps’ second conference series on-deck, Lorusso will need to continue his play heading into a three-game away series against Minnesota.

While not a particularly difficult opponent with a record sitting at 8-18, 0-3 in-conference, the Golden Gophers present Maryland with a second shot at the sweep it narrowly missed against the Nittany Lions.

Those sweeps will be important down the stretch and as Vaughn’s squad builds a hosting resume. The Terps will likely need to largely dominate conference play in order to provide a convincing enough body of work to warrant hosting.

With Lorusso’s help, they could pull it off. The junior’s breakout year has already contributed to a few wins.

And with the hot streak he has going on, he could supply a couple more.