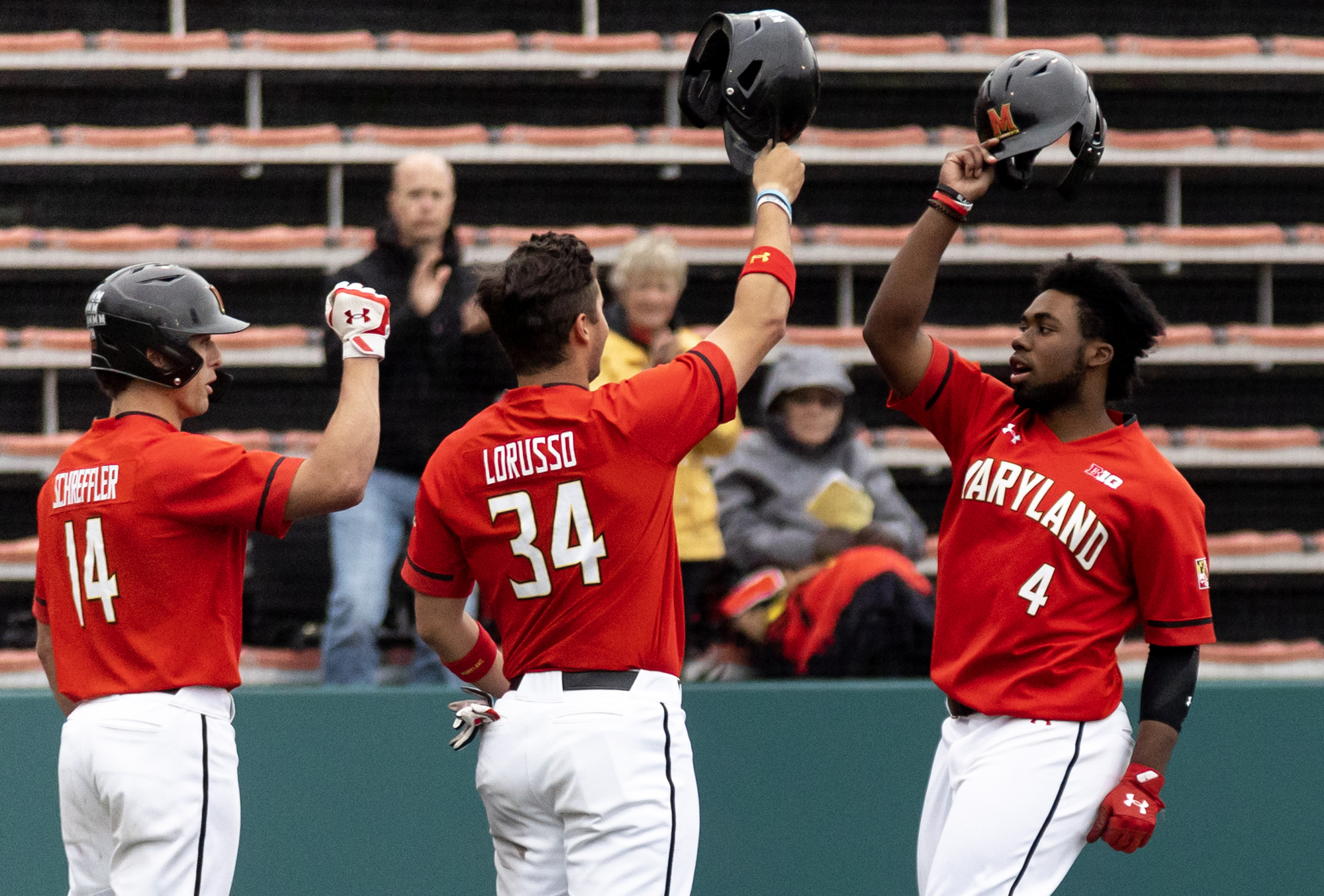 The Terps dragged and seemingly went through the motions on a rainy Tuesday that seemed unsuited for baseball.

George Mason kept pace with Maryland baseball most of the way and looked to penalize it for its shortcomings.

But the Terps’ bats were too strong. Max Costes set his feet in the batter’s box and Maryland never looked back as he cracked a crucial two-run homer.

“That was a big home run in a big spot,” coach Rob Vaughn said. “He got every ounce of that. It was huge.”

With the homer, Costes grabbed sole possession of second all-time in career homers at Maryland.

With a light rain dripping down on Bob “Turtle” Smith Stadium, the Terps sought out offense on a day that wasn’t conducive to baseball.

Mid-week starter Logan Ott climbed the mound and did the rest. Cracking the game open with four consecutive 1-2-3 innings, Ott frustrated hitters with his close, but not-close enough style that collected light contact throughout.

“We were thinking, let’s get him through the lineup once they’ve already seen him maybe the second time through we make a move,” Vaughn said. “He was too good to do that.”

With George Mason’s first runner sitting on second base in the third inning, the Patriots looked to, at the very least, advance him. As a high-fly climbed into centerfield towards Chris Alleyne, he had the potential for a tag-up opportunity.

But Alleyne had the arm. Backpedaling towards the wall, Alleyne caught the fly and took a quick hop to power his throw to third that bounced parallel with the runner and into Lorusso’s glove. He laid the tag.

Landing two outs on one play, Alleyne closed the third decisively. Maryland soon grabbed a decisive lead with a two-run inning off a passed ball and an RBI single from Lorusso to add to the run it already had.

As the fourth passed, the tone soured.

“[Alleyne’s] our captain, that’s what he’s supposed to do,” Vaughn said. “[Alleyne] had a great game today, he had three hits [and] made a huge play catching the ball at the wall, throwing the guy out at third.”

Ott’s style burned him as George Mason began to find its mark and collect base runners. With time, it was damaging.

The bases were loaded. Another hit cracked into fair territory brought one runner home, and then Ott took his leave in favor of Will Glock. But the runners were already on and Glock couldn’t get out of the jam as they all scored off a two-RBI single and a passed ball.

The game looked like it had gotten away from Maryland. But with the power threats the Terps held in their lineup, the game wasn’t even close to over.

Costes made sure of that.

Hammering a pitch to left, the senior trotted along the basepath to the tune of a two-run homer that grabbed the lead for the Terps in the sixth frame.

“Now that I’m finally healthy, I got my regular swing back,” Costes said. “I’m able to show that yes, I can do the walks, on-base stuff too but I still got the send the ball over the fence type stuff.”

An uneventful seventh inning gave way to another that captivated eyes on an otherwise unsightly day.

And despite a solo home run by the Patriots that chipped into the Terps’ lead, the game was Maryland’s.

“We had 2,000 people here this weekend, there were three people here today, understandably,” Vaughn said. “I didn’t think we were mentally as hooked in as we needed to be at the beginning. We flipped the switch in the middle of the game and fortunately got it done.”