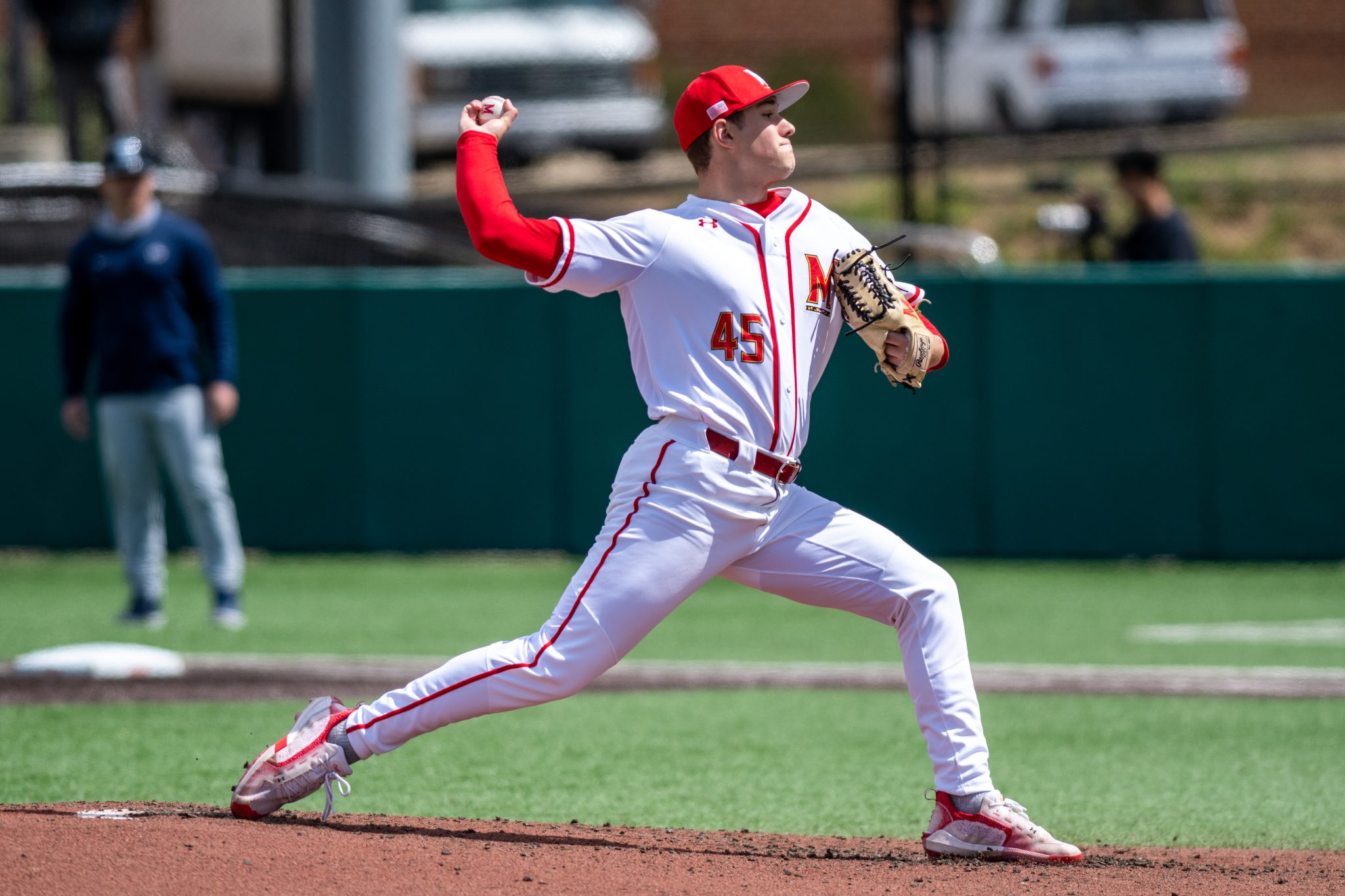 Jason Savacool made it easy for Maryland baseball.

The experienced sophomore did what his other two counterparts could not in the Terps’ weekend series with Penn State — frustrate the Nittany Lions’ lineup.

Leaving over a dozen batters strolling towards their dugout with little but likely sympathy and shared frustration awaiting them, Savacool manipulated the series finale to his will.

“That guy’s a number one for a lot of teams. The beauty is regardless of what happens if you got him going Sunday to [win] the series you feel like you have an advantage.”

Cruising behind a golden performance from Savacool, Maryland ran away with the series, 7-2, over the Nittany Lions.

Coming off a controversial loss that ran into extra-innings, Maryland ran into Sunday needing a win to take the series.

And like the previous two games, this one didn’t lean any less exciting. Jason Savacool grabbed the mound and thrived sans one early mistake.

Utilizing a threatening mix of a fastball riding well into the 90s and a breaking ball that found its mark a fair amount, Savacool was lethal. The mix generated a fair amount of swing-and-miss opportunities to the tune of 13 punch outs.

“I had the slider working really well today, getting the curveball in there too and landing that pretty often,” Savacool said. “Two-seam [fastball] was working well today too, threw a few change-ups in there and I guess everything was just kinda on today.”

A typical play style for the Terps, Maryland rode quality pitching while its offense sought a decisive tone for the outing.

Penn State helped. Starter Tommy Molsky plunked a pair of batters as the Terps capitalized with an RBI fly-out from Nick Lorusso.

The Nittany Lions grabbed a solo homer in the second inning before Savacool struck out three batters in a row. Then Maryland turned it on.

Walking up with a pair of outs on the field in a tie game, Kevin Keister perhaps had the lowered expectation that comes along with the ninth spot in the order.

But not this at-bat. Keister smashed a two-run homer for his third of the year, and thrusted the Terps out front. With Savacool still running flaming-hot, Maryland had little to do but wait for the breakout.

“The biggest thing is when you see your starting pitcher on the mound doing well throughout the first couple of innings makes it a lot easier to hit,” Savacool said. “You don’t feel the pressure of, ‘oh, we have to score to be behind this guy.’”

One cut catalyzed it.

It was a no-doubter. Lorusso crushed a ball to right-field that scarcely moved the Nittany Lions’ outfielders.

“[I was] just looking for something soft,” Lorusso said. “I knew when their coach came out, I knew I probably wasn’t getting another fastball.”

The three-RBI slug made it 7-1 — a lead well larger than what Savacool would need to hand it off to his reliever in the eighth inning in relative security.

A steady rotation of relief pitchers in the frame likely collected some doubt, until Nigel Belgrave capped the last out after two other throwers came up short.

Belgrave found the right tune, closing the series out clean for the Terps as they collected their 22nd win.

“[Coming] out of here with the series win, that’s what you come here on the weekend to do,” Vaughn said. “Sweeping stuff is awesome but you roll into every weekend to win the series … found a way to get it done.”