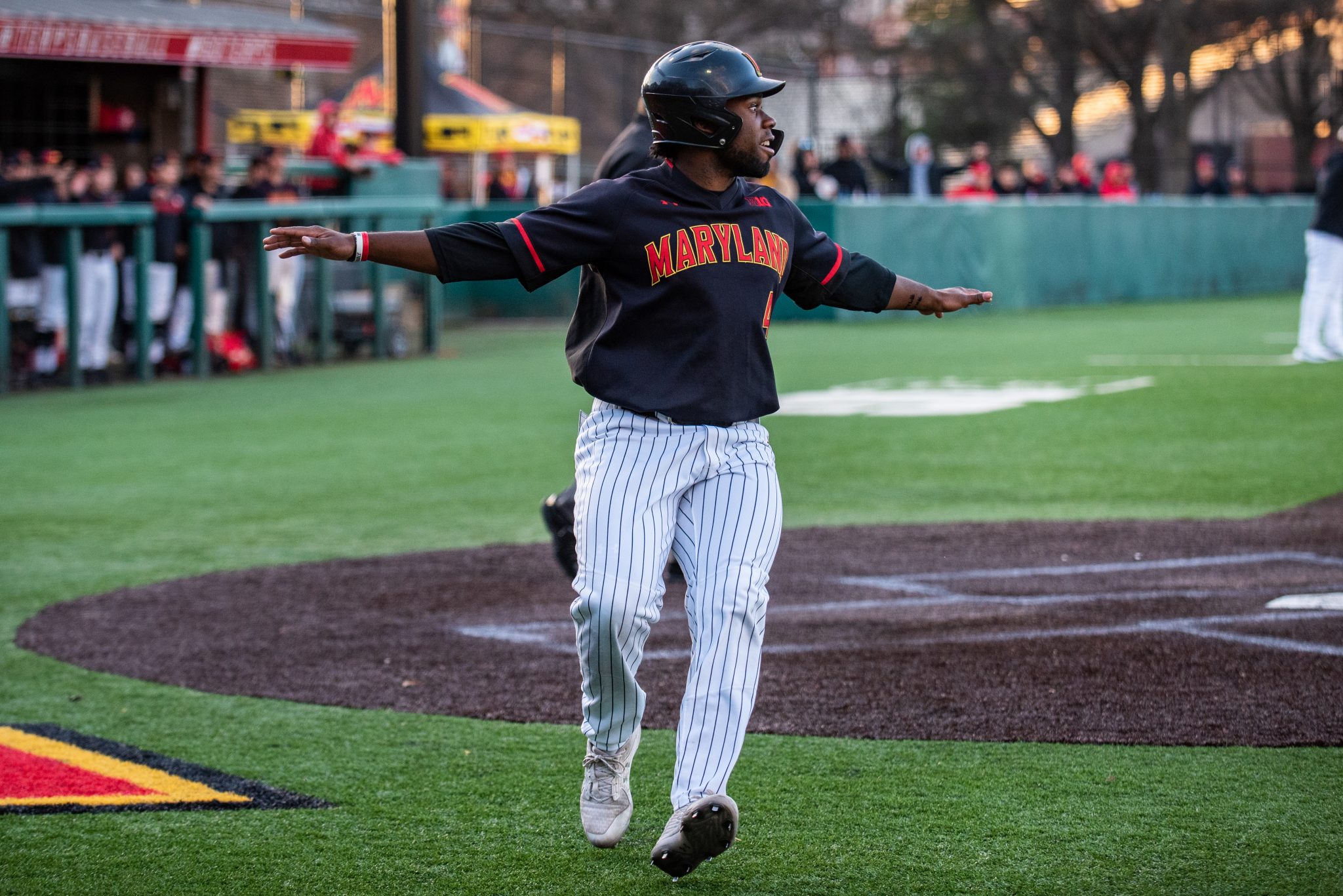 Max Costes fed into the buzzing crowd, lifting his hands to rile them up. He awaited his turn at the plate in a tie game.

Matt Shaw struck out, and Costes had very little room for error with runners on and two outs. Maryland baseball had made enough mistakes — this could be a fatal one.

But there was no mistake. Costes cranked the ball into left to break the tie as a runner crossed in a back-and-forth game. Costes’ hit set up the killer as Chris Alleyne slammed a three-run homer in the next frame to seal it.

“Definitely a momentum swing there, especially with the crowd, the crowd was awesome today,” Alleyne said. “I’m feeding off that [and] I think that kinda gave us a boost there at the end.”

Propelled by a late-inning rally, Maryland blew past the Nittany Lions, 8-4.

Maryland started up an all-important conference opener against the Nittany Lions with a whimper. Mistakes rocked the Terps’ fielders early despite a solid start by Nick Dean.

“I thought we did a good job of not being emotional,” coach Rob Vaughn said. “We just didn’t play very good defensively early.”

Then, after a strikeout, he took off.

Quickly popping up and gunning a ball towards second, Luke Shliger had Harry. But the ball veered right and he advanced. Alleyne grabbed it and launched it well over third. Harry strolled home with a shrug as Penn State took an early lead off two straight errors.

“I think it’s just part of the game,” Alleyne said. “I think we just need a little more mental focus. Just be more mentally checked into the game early.”

Despite the poor start, Maryland soon awoke. Quickly grabbing a pair of bases via a Costes walk and a cracked double to right by Troy Schreffler, the Terps had the chance to score. Bobby Zmarzlak took the initiative with a sacrifice bunt to cross Costes and even up the score.

Maryland carried the steady offensive approach into the third frame. Nick Lorusso walked and Matt Shaw grounded one into the left-field gap to hit him home — not exactly a bombs-away approach.

Smashing the first pitch of the fourth inning to left-center, Zmarzlak sent Nittany Lions pitcher Jaden Henline staring skyward, rolling his head back as he slumped his shoulders. The junior’s home run gave Maryland a key 3-1 lead after a trio of errors haunted them.

Inefficient batting couldn’t turn the homer into a rally as the Terps still weren’t delivering at the plate. Thanks to decent mound play by Dean, Maryland stayed close.

“It was really good to have a pretty good outing after the last two [where] I struggled a little bit,” Dean said. “It’s just good to get back on the right track and I’m glad we got the win.”

But Dean soon got knocked out of alignment as a two-run sixth inning by Penn State tied the game.

Schreffler was close to blocking the spark. Missing narrowly on a line-drive to right, Schreffler backtracked as the ball rolled away from him and the Nittany Lions grabbed a triple.

One high fly to right later, and the Nittany Lions snatched the tie. A similar play in the next inning broke the tie.

The momentum leaned heavily towards Penn State. A mistake-filled day by the Terps left them with ground to make up.

A key moment was needed for Maryland in the seventh frame.

And Costes delivered with an RBI bomb to the left to score Alleyne.

Next inning, Alleyne’s three-RBI slug sealed the envelope and Noah Mrotek’s relief appearance placed the seal on it for Maryland’s 21st win.

“I thought the boys never panicked,” Vaughn said. “They fought really, really hard. And your captain comes up with a huge swing in the eight and [we] found a way to win.”