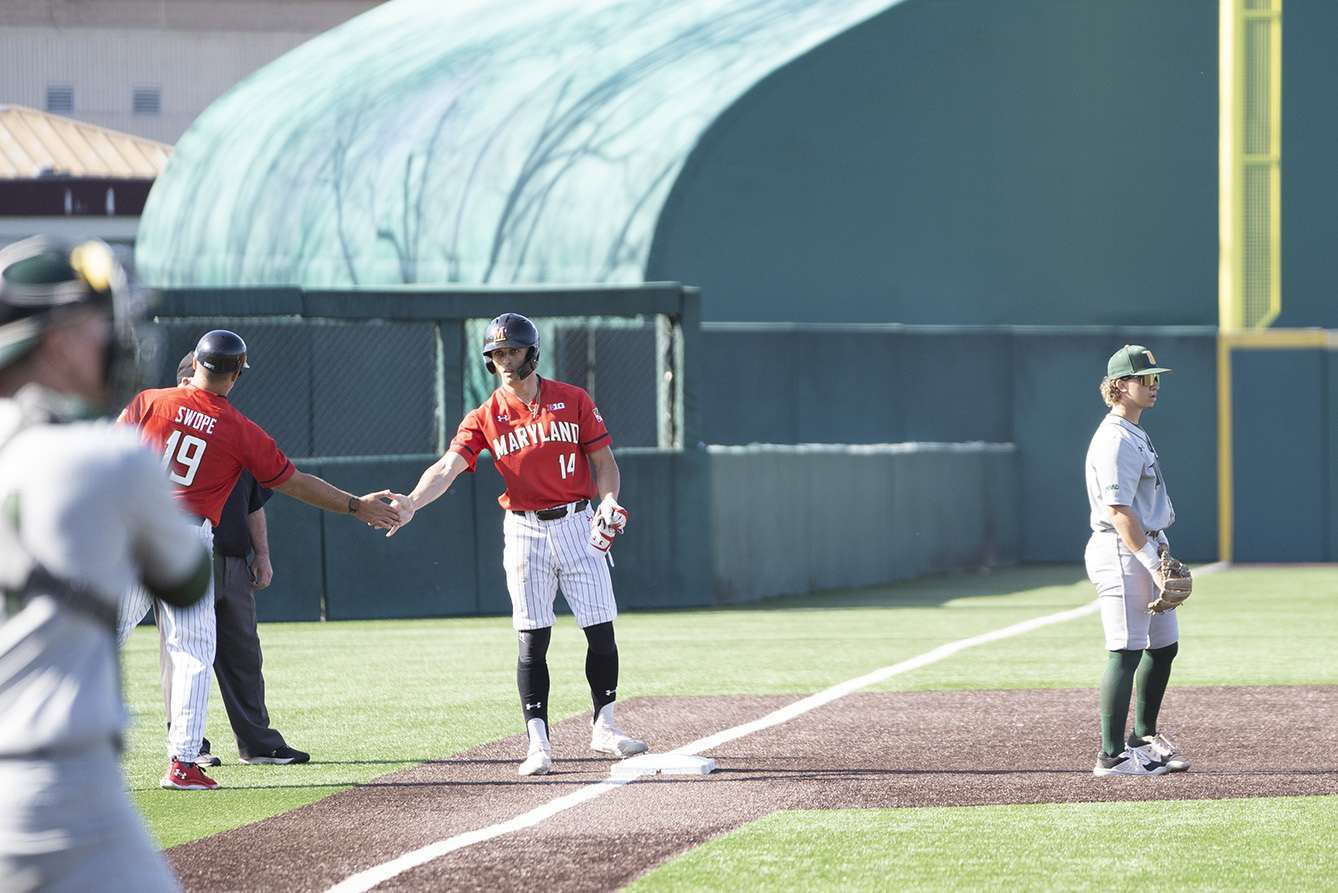 Maryland baseball took on George Mason after a 26-run outing — the Terps seemed red-hot at the plate. Despite that, their matchup with the Patriots was anything but. One hit defined the game.

Troy Schreffler dialed it up, staring down a low-slot pitch from the Patriots’ pitcher. Schreffler swung, catching the ball just off the end of his bat as it soared down the right field line and dropped.

The hit dropped just inches away from the foul line. The hit was indicative of the Terps’ performance, as Maryland just barely escaped the consequence of cold hitting behind the fateful slug.

Off the back of stellar mound-play and late heroics, the Terps dodged disaster with a 3-1 defeat of George Mason.

Given one last tune-up before beginning conference play, Logan Ott climbed the mound and stared down George Mason.

And through the majority of the contest, offense priced at a premium. The Terps had little issue making early contact, it just wasn’t hard enough.

“As a team, we want to be able to club the baseball,” Vaughn said. “Today, the winds in your face, it’s cold, it’s a bigger yard. You got to be able to win in some different ways.”

Maryland didn’t find significant success on the bases until the third. An out-of-control Britt Yount tripped early with an opening walk of Luke Shliger and he advanced to third in short-order after a ground-out and a wild pitch by Yount.

Shliger, standing on third and in scoring position, would be important for the Terps.

Nick Lorusso cracked light-contact to the Patriots’ shortstop and Shliger crossed for a run as the throw made the second out. Maryland didn’t know it yet, but that would be the first run it would cross for a while.

“Yesterday, the offense put on a clinic and today our pitchers were outstanding,” Vaughn said.  “Your defense has to be the biggest part of the game regardless of anything else.”

The Terps had opportunities. They proved shallow at times as the fourth inning saw the Patriots’ reliever take over for Yount and going wild around the strike zone.

Every indicator pointed to Maryland scoring with the bases loaded. The Terps had one out and Chris Alleyne set to bat. Taking a hesitant swing, Alleyne bounced the ball off the ground and into the air.

The Patriots’ pitcher jumped, snagged Alleyne’s hit, and cleverly threw to home to get the force-out and prevent the run. Lorusso flied out on the next at-bat and Maryland came up with nothing in a crucial opportunity.

Ott managed to frustrate the Patriots in similar fashion. He allowed a trio of hits in five innings pitched with a pair of strikeouts. His light-contact style worked well enough to shut out George Mason while he was on the mound.

The Terps’ offense didn’t find more success as the outing wore on with the Patriots’ failing to face more than three batters in three consecutive innings from the fifth to the seventh. Thanks to Maryland’s mound efforts, it kept a solid lead heading into the eighth despite disappointing results at the plate.

[Black Maryland athletes, coaches reflect on what it means to be underrepresented in sports]

All it took was the right bounce.

Slamming a double to far-right that dropped just shy of the line, Schreffler started a crucial rally that could  put the Patriots away as Matt Shaw crossed home.

Bobby Zmarzlak jumped in shortly after with a fast-moving grounder to the left-field gap that returned the favor to Schreffler. Schreffler slid home as the out attempt came up feebly behind him.

Maryland maintained a 3-0 lead as Dave Falco came in on Nick Robinson’s two-inning wake onto the mound in the eighth. His appearance reinforced tensions as the Patriots added a run off a pair of singles to make it a two-run deficit.

“[George Mason] is tough,” Vaughn said. “They play really hard. [Bill Brown] has done a great job for a long time. They’re tough kids and they play the game the right way, and so [they’re] never out of it.”

Then, as Maryland failed to reinforce its lead, George Mason threatened.

Loading the bases, the Patriots needed one swipe with two outs to secure a win. But, so did Maryland. Sean Heine was tasked with delivering the finishing pitches.

“At the end, there’s a reason Sean Heine’s one of our captains,” Vaughn said. “I’ve seen that happen, we put a play on to try to get out of that thing and it gets fumbled in the infield and I’ve seen that thing go really wrong.”

Carsen Pracht’s final hit came up short and the Terps made the throw to first to escape with their 20th win of the season.

“To be sitting here at 20-5 going into conference play and still not feel like you’re the best version yet is a really good thing,” Vaughn said. “Could be scary how good these guys can be.”