Black Maryland athletes, coaches reflect on what it means to be underrepresented in sports 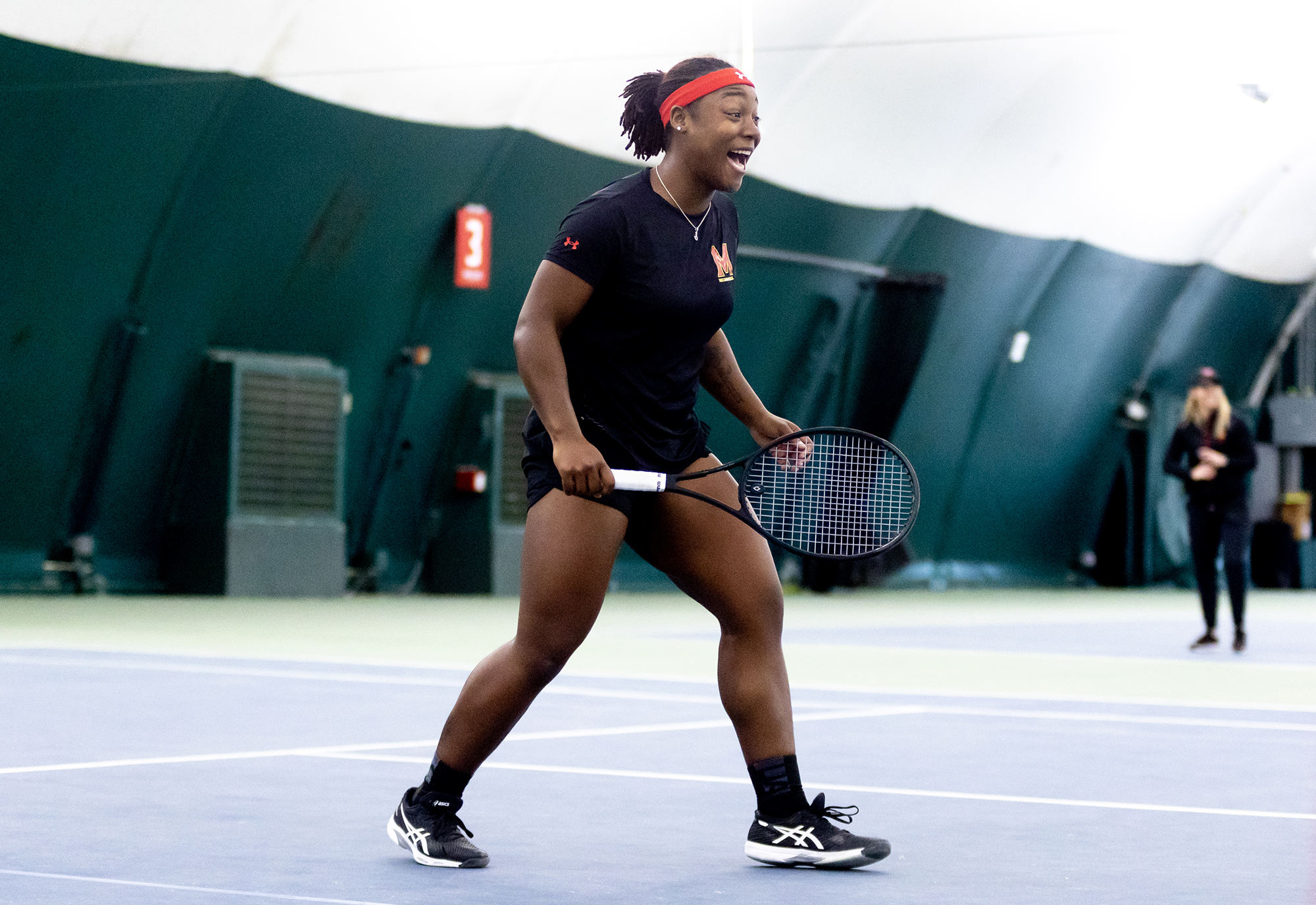 Maryland's Mary Brumfield celebrates her winner during her and Selma Cadar's 6-3 doubles victory over East Carolina's Ines Bachir and Alisha Hussain on March 9, 2022. The Terps won the meet 4-0, continuing their eight-game winning streak, the longest since 1990. (Julia Nikhinson/The Diamondback)

Sixteen percent of NCAA athletes across all divisions are Black. And for Division I programs, 20 percent of players are Black — but in some sports, you wouldn’t be able to tell.

In college programs such as men’s basketball and football, Black athletes make up a large percentage, if not the majority, of the player population.

However, in sports such as baseball or tennis, it’s quite the opposite.

Major League Baseball hit its peak Black participation rate in the ’80s and hasn’t met that level since. With programs such as Reviving Baseball in Inner Cities, the MLB has been trying to find ways to renew the presence of Black athletes in the league.

As in the major leagues, Black representation in NCAA baseball wasn’t high either. In 2021, it was only four percent, according to an NCAA database.

Growing up in Baltimore, he and his older brother, former Terp outfielder Marty Costes, were a part of the RBI program.

Costes said his experience playing baseball in the inner city was diverse but over time, the diversity has withered away.

“I can kind of count on my hand the number of Black kids I see in the Big Ten,” Costes said.

Costes feels there’s more than just an absence of Black players on the field, but Black attendants at games too.

He called it “the lack of seeing yourself.”

Costes said his game isn’t affected by the racial slurs or jeers that might come from being one of the only Black people in the stadium at any given moment — but the lack of seeing someone like himself takes its toll sometimes.

“It was me and [Chris Alleyne] who just walked off and [AJ Lee]. We were literally the only three Black people in the stadium. It was packed out there on that Friday night,” Costes said of a game at Illinois his freshman year.

Off of the field, the scarcity of Black presence on the baseball team still affects Costes.

In the aftermath of events such as the murder of George Floyd in 2020, Costes doesn’t have many people who share the same experiences as him on the team.

As one of the few Black players on the team, Costes’ experiences are unique to him. He said he often has to explain and educate his peers in these situations. Costes shares his own experiences off of the field with his teammates as well.

“I’m kind of like the middleman for all of them in a way,” said Costes.

He said he’s been stopped by police while walking back to his dorm. When he shares these occurrences with other players on the team, they are surprised.

“They know I’m not getting into any trouble or anything like that. But that lets them know, this is really what it’s like for people that look like … me in America,” Costes said.

Costes believes one of the largest factors in the lack of Black participation in baseball comes from the sport’s expensive nature.

Baseball is often cited as one of the most expensive youth sports in the country. According to an Aspen Institute survey, parents estimate they spend $659.96 per child per year to play baseball.

[After early retirement, Zoe Young still has a voice in Maryland women’s basketball

Costes has never gone. He said he’s the only current Terp who’s never played there.

“When I was playing actual tournaments for other teams, somebody else had to pay for me. My parents couldn’t afford that stuff,” Costes said. “I went to one baseball camp … ever. And somebody had to pay for me to be there.”

That one camp was a Maryland camp.

“It takes a lot to play baseball, like to buy equipment, to travel … to get in front of coaches,” Costes said.

Tennis, like baseball, is also suffering from a dearth of Black players.

Mary Brumfield is a freshman on Maryland tennis. Despite growing up in Jackson, Mississippi, and going to school in Florida, being the only Black woman on a tennis team isn’t a new experience.

Brumfield has been playing tennis since she was eight years old. She looks up to Serena and Venus Williams as well as Naomi Osaka — she said they’re her three biggest role models.

“They open the gateway for Black children to see that, not only can this sport be diverse, but they can excel in life,” Brumfield said.

According to the most recent Census, more than 82 percent of the Jackson, Mississippi, population is Black. Brumfield had a different experience growing up playing tennis there.

“You would think there would be many African American people playing tennis in Jackson, Mississippi, there were little to none,” Brumfield said.

Brumfield moved to Florida to train at the age of 12. She said it was a big experience that introduced her to new people to play against, but Florida wasn’t much different in that Brumfield didn’t have peers that looked like herself.

“I have been racially abused on the court … I was just starting out … before I left Mississippi … I have been called racial slurs, which to me at that time, I was young, so I didn’t take it personally,” Brumfield said. “This parent called me the N-word. My mom wanted to immediately stop the match. She didn’t want me to play anymore. She didn’t want me to play at that club anymore.”

Even after moving to Florida, Brumfield still experienced racism on the court. At the age of 14, she was competing in a final and experienced more racism.

“I shook my opponent’s hand, but her father didn’t shake my mother’s hand … but he said he does not shake Black people’s hands,” Brumfield said.

Even now, Brumfield is the only Black player on the women’s tennis team at Maryland.

NCAA statistics show only five percent of women’s tennis players are Black. Last year marks the first year in at least nine years that the number of Black women in NCAA tennis programs across all divisions is below 400. In Division I programs, that number is 131.

Brumfield, like Costes, also believes the poor Black representation in her sport is due to the cost.

“Tennis is not a sport for the poor,” Brumfield said.

According to an Aspen Institute survey, tennis costs families an estimated average $1,170.09 per year for every child. The average spending on all sports included in the survey per child, per year is $692.

Growing up Brumfield’s tennis career was supported by her mother — she’s an outlier in an expensive sport.

A 2021 Statista report shows 74 percent of the NBA’s athletes are African American. Compared to 23 percent of NBA coaches in the 2020-21 season.

In the NFL, there are currently only two Black head coaches out of the 32 teams in the league. Since the NFL’s inception, there have been over 500 head coaches and only 24 were Black, according to RoarDetroit.

Women from Black backgrounds are severely underrepresented in coaching, too. Coach Chelsea France has been the assistant coach for distance and cross country at Maryland since 2019.

“You have to get used to being the only one in that space sometimes,” France said.

France ran track at Virginia as an undergraduate and ran for a fifth year at South Carolina. As an athlete, she said she experienced racism throughout her college career.

“As Black athletes or Black coaches, there are definitely some issues … that you run into throughout your career … either things are said or people just don’t know that it is racist or comes across as microaggressions,” France said.

She says a lot of the social injustice in 2020 has helped to open up and progress conversations about race.

A working paper from the Global Sport Institute at Arizona State University and the Paul Robeson Research Center for Innovative Academic & Athletic Prowess at the University of Central Florida, states every head coach of color hired since 2009 had previous playing experience in college and/or professional leagues compared to 91 percent of white head coaches.

“I know as a Black female in this space, I have to do well and I know that I’m being held to a higher standard,” France said. “Sometimes it is a weight. You’re seen in a certain light.”

France said putting things in perspective and thinking about her “why” keeps her going. She often thinks about what it is she would’ve wanted as an athlete. Despite the lack of Black representation in baseball, Costes is still looking at the bright side. He aims to be a hero for other Black players in the future. He quotes his love for comic books and anime in his desire to be a hero.

“What can be better than knowing that you’re inspiring somebody else to chase their dreams right?” Costes said.

Beyond being a role model, Costes hopes to give back to Baltimore and improve the baseball scene in the city by making good fields.

Costes gives credit to having to play on bad fields growing up, but doesn’t want anyone else to have to do that.

“Coach [Rob] Vaughn talks about this all the time, about leaving things better than you found it,” Costes said.

Like Costes, Brumfield aims to be an idol for younger athletes on the rise. She calls it an honor to have the opportunity to be a role model or be someone’s representation. Brumfield hopes to continue to push for change in the sport to help tennis become more inclusive.

“My dream is to go pro in tennis and then open up an academy where every race is welcomed,” Brumfield said. “I would like to fit in that if you do not have the money and your child really wants to play tennis and is serious about it, I would like to help that child.”