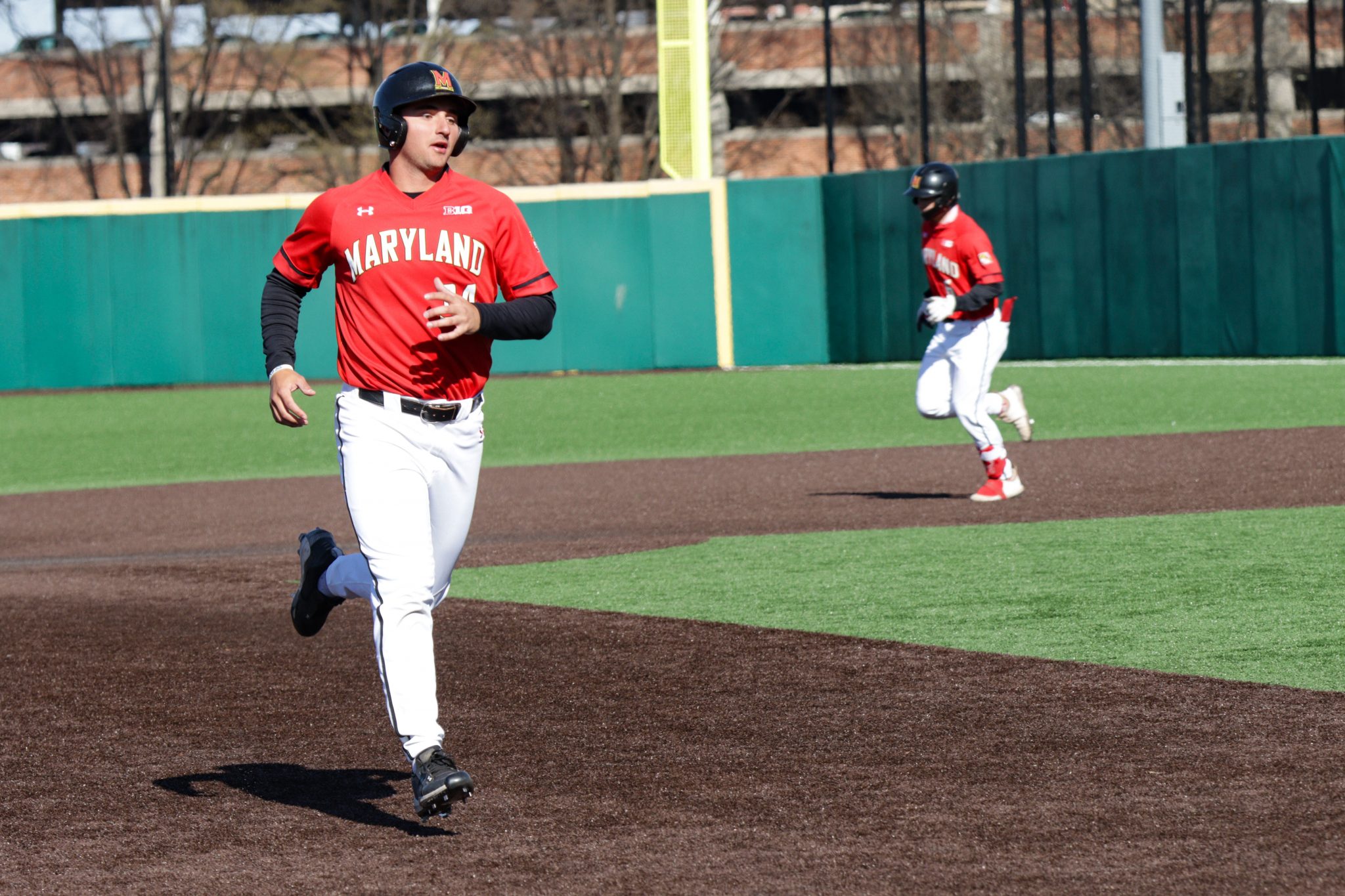 Nick Lorusso runs from second to third base during Maryland baseball's 26-8 win over Towson on March 29, 2022. (Kurt Leinemann/ The Diamondback)

On a bone-chilling March day, Maryland baseball’s offense glowed blue-hot as they crushed Towson with one soul-crushing hit after another. It rarely stood in doubt.

It was a historic outing for the Terps as they put up a football score on their in-state competitors.

Propelled by a whopping 23 hits and four homers, Maryland crushed the Tigers, 26-8.

Nothing short of offensive devastation rocked Towson early as the Terps piled on runs through a rotating Tigers pitching staff.

Towson’s early at-bats quickly faded into obscurity as Maryland pounded balls into the outfield and forced the issue from their opening stint at the plate. Efficient base-running amidst some fielding mistakes from the Tigers assisted the Terps in scoring a pair before Matt Shaw graced the plate.

Raising his lead leg in anticipation, Shaw twisted and throttled a pitch into deep-right and over the wall for a two-RBI homer. The early homer served to send not a message, but an omen.

Maryland baseball was going to score a lot of runs.

Their momentum continued into the second after Towson countered with a single run as the Terps victimized the Tigers’ pitchers with a steady hitting approach that put runners on and batted them home.

Nothing crazy, nothing innovative.

But amidst that was Ryan Van Buren starting on the mound for Maryland, and he began to show quick cracks in the third that piled up enough to give the Tigers hope at 8-4.

That hope grew increasingly shallow as the Terps’ third stint at the plate took hold and constricted the fabric of this game to its will.

The game ended in spirit when there were two outs, two runners on and Nick Lorusso took the plate in the third inning. He squared up to the pitch, smashed it to center, and the Tigers’ centerfielder watched it fly.

Then, Max Costes cranked a solo homer to left-center to move into a tie for second all-time on Maryland’s homer list. Shaw got on base with a single soon after and Troy Schreffler got in on the fun with a blast to right-center to make it a devastating, 14-4.

[No. 22 Maryland baseball downed by Dallas Baptist for series loss, 5-2]

The Terps never looked back.

A five-run fourth compounded Towson’s sorrows as it rotated a total of eight pitchers on the day. By the sixth, Maryland still held on to a 19-4 lead as it spread a fair amount of  playing time to its backups.

The seventh saw even more part-time players filter in, just for the Terps to pour seven more runs onto the Tigers, adding insult to injury.

All that stood for the Terps to take down were school offensive records. They came close — just two hits away from tying the all-time school hits record.

And the historic offensive day came at the Tigers’ expense.

Maryland cruised the rest of the way to capture its 19th win in dominant fashion.