No. 22 Maryland baseball downed by Dallas Baptist for series loss, 5-2 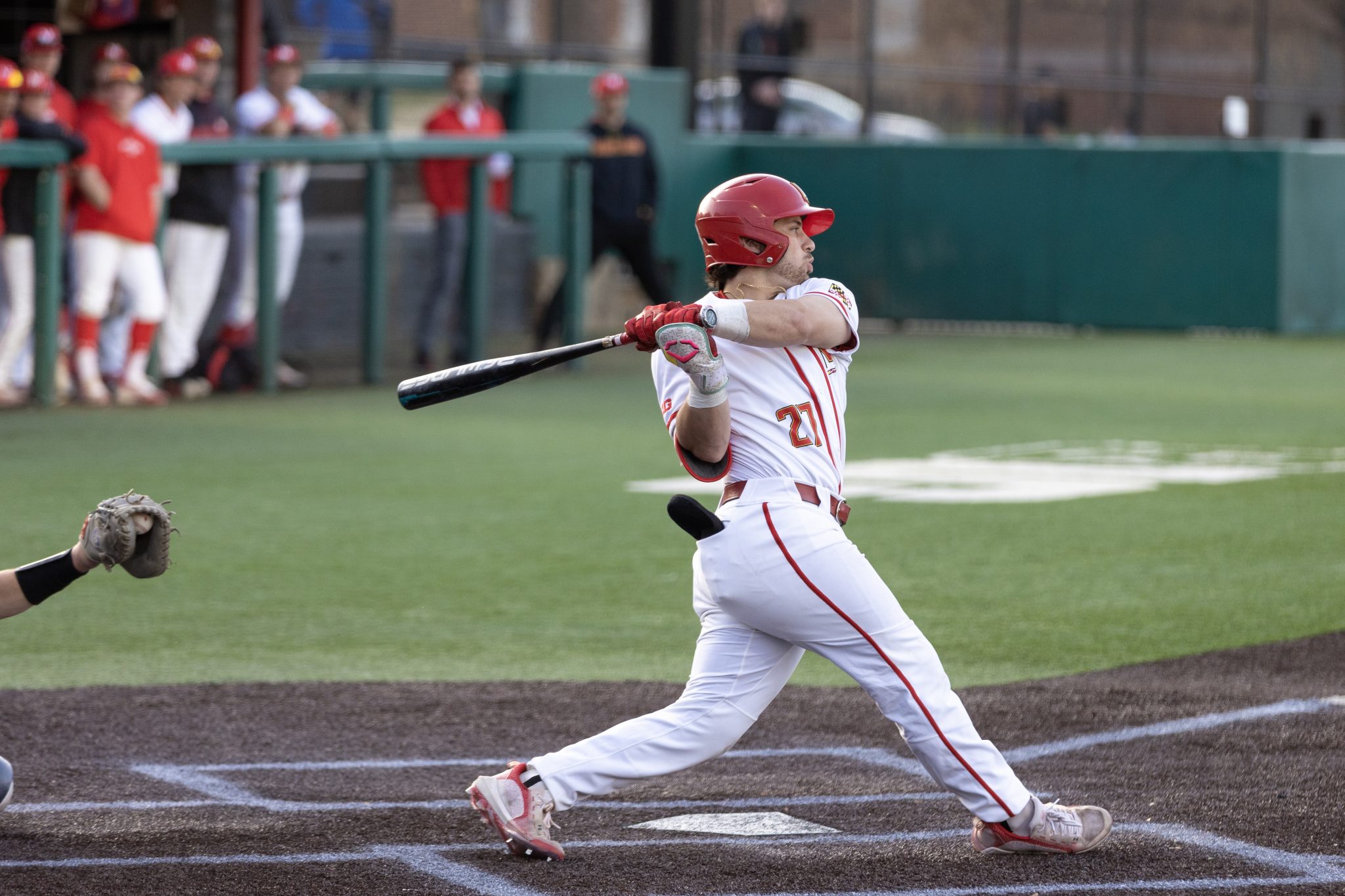 Momentum stood at a game-high for Maryland baseball.

A trio of runners stood on base and Matt Shaw had a 1-0 count. A bounced pitch sent Luke Shliger scrambling for home with two outs. But the run never crossed.

The ball quickly found its way back to the Patriots’ catcher off a brick wall and Shliger had no chance at home. A huge missed opportunity rocked the Terps and they never recovered.

“It was the right play, but we knew it was a brick backstop… unfortunately it was a situation where the ball bounced right back to him,” coach Rob Vaughn said.

Maryland found itself wrapped in a crucial series decider against Dallas Baptist — one that could pad the Terps’ potential NCAA playoff resume significantly.

With a pair of lopsided games preceding Sunday’s contest, one favoring each squad, neither team looked keen to lay down for the clincher.

Patriots pitcher Ryan Johnson started off with a clean first frame highlighted by a double play to help end the inning on the following at-bat. The six-foot-six right-hander clocked fastballs north of 95 miles per hour as he faced off against Maryland’s typical Sunday starter in Jason Savacool.

“They threw out some guys that mixed their pitches well, and I think we were on-time with every single one,” Shaw said. “…I think offensively we didn’t have a problem, we play good defense.”

Savacool fought back with his own prominent fastball and change-up that worked for him in his first pair of innings with a trio of strikeouts. As Max Costes torqued a fastball down the middle of the plate over the left-center fence in the second, Maryland stole the momentum.

[Bats come alive for No. 22 Maryland baseball in commanding 11-5 win over Dallas Baptist]

Three runners managed to reach base in the third inning for the Terps. Shaw, who had already several homers on the year, took the plate looking to swell his squad’s advantage.

A called ball flew by Shaw. The second pitch sailed far outside and bounced away from the catcher’s glove toward the brick backstop.

Shliger took off for home as the ball bounced back to the catcher as he waited for Shliger. The tag looked easy but Maryland took it hard as three runners were kept away from the plate and Vaughn fought against the call.

“I don’t think there ever was a tag put on him but we don’t have replay in our league,” Vaughn said. “I’m still trying to learn these things and apparently we have ten seconds and I didn’t get out there quick enough.”

Nothing seemed the same for the Terps after the demoralizing call. Momentum had ebbed away from them as Dallas Baptist crossed a pair of runners started by a powerful RBI triple shot to center by Jace Grady.

Maryland reeled as Johnson and later reliever Bubba Hall picked it apart from the mound.

“I feel like every guy they put out there [threw] 93-95 [mph],” Vaughn said. “Honestly, that’s why you come down here [and] that’s why we play the teams we play in the preseason … I want our [players] exposed to really big arms.”

An opening fourth-inning double from Shaw, a fifth-inning single from Shliger and even a two-out solo shot from Kevin Keister later all fell relatively empty as the Terps struggled to string much offense together.

“I think we obviously had some things we can clean up,” Shaw said. “As long as we keep progressing we should be in good shape come June.”

Maryland’s struggle at the plate gave the Patriots time — time that lessened the pressure on their bats and left them to tee off on Savacool.

And they did just that in the sixth inning. Nate Rombach, the same catcher that tagged Shliger out at home, rocketed a solo shot to left. And unlike the Terps, the Patriots built on the hit with a succeeding double that ignited an RBI single to make it 5-1.

The eighth saw more shallow batting for Maryland which gave way to some struggles for the Terps’ reliever Noah Mrotek when he put two runners on base. Sean Heine bailed him out to set up a do-or-die inning for Maryland.

Hope sparked for the Terps as two runners stood aboard with the help of a Bobby Zmarzlak walk and a Sean Lane single. That spark blazed as Shliger walked to load the bases with Chris Alleyne at the plate looking to take the lead.

Alleyne made contact. It wasn’t enough. The ball fell short of evading Dallas Baptist and the Patriots walked out with a series win.

“I thought we did some really good things today, we just didn’t do quite enough,” Vaughn said. “They were just more efficient with their opportunities and we weren’t. That’s the game of baseball.”