Bats come alive for No. 22 Maryland baseball in commanding 11-5 win over Dallas Baptist 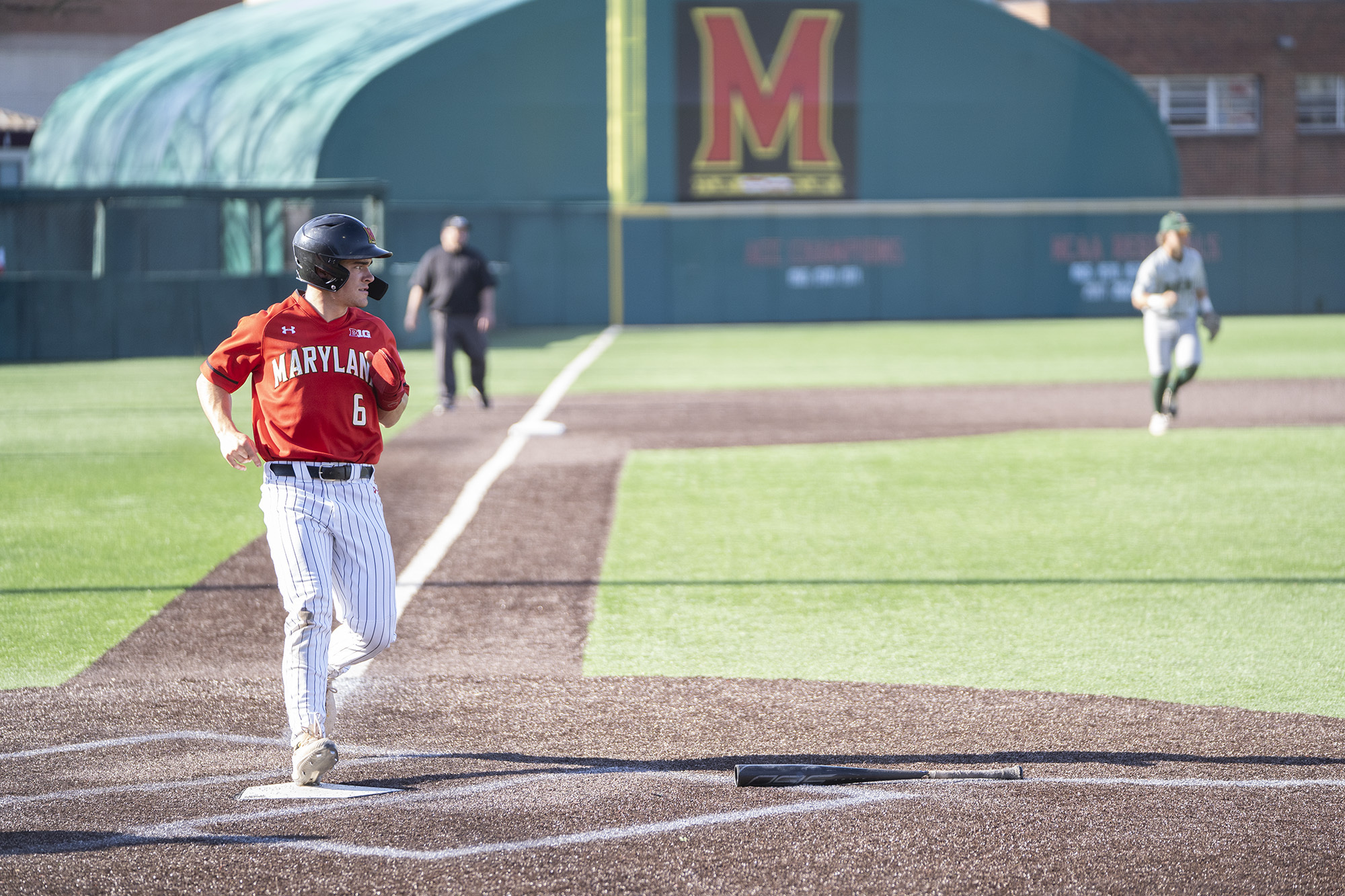 Matt Shaw was doing it all.

In the third inning on a 3-2 count Shaw took Dallas Baptist starting pitcher Luke Eldred deep to center field for a two-run homer — his fifth of the year — to put Maryland baseball well ahead.

Shaw wasn’t done showing off his power. In the sixth inning, he hit another two-run homer, giving him four RBIs on the day.

In the bottom of the second inning Shaw flashed his leather, fielding a liner on a one hop and firing a strike to Max Costes for an acrobatic tag to record a tough out.

It was Shaw’s fifth straight field assist out of nine total to help Ryan Ramsey navigate through the Patriots’ lineup.

Luke Shliger, Chris Alleyne, and Nick Lorusso started the game against Eldred with singles to load the bases with no outs for Costes.

Costes hit into a double play to bring in a run, but it wasn’t quite what Maryland was looking for. A Shaw groundout left a missed opportunity to put up a big inning.

But the Terps didn’t miss their chances at a game-changing innings in the third and fifth.

After a single by Shliger in the third and a bloop by Lorusso — followed with aggressive base running from Shliger — Costes had another chance with runners in scoring position.

Costes sac fly brought Shliger home and made it 2-0 before Shaw’s first home run capped off the inning for Maryland.

Shaw’s bat would come up huge again in the fifth frame with a double to the gap in left-center that put two runners in scoring position for the red-hot Big Ten Player of the Week, Troy Schreffler.

Schreffler would deliver with an RBI-single into left field and Sean Lane would follow suit knocking in Shaw before Kevin Keister’s RBI-single finished off the Terps’ second major inning of the day and a 7-1 lead.

In the next inning with two outs and a runner on first, Shaw battled with Luke Trahan until he took a swing on a 1-2 pitch for his second home run of the day.

Alleyne crushed a two-run homer of his own to right field in the seventh to make it 11 runs for the Terps.

Ramsey started his outing on the mound working around a two-out walk and a double to strand two runners in scoring position. The junior got into more jams in both the second inning and third innings but came out of it unscathed.

With two outs in the fourth, Ramsey gave up a double, a wild pitch, and an RBI-single courtesy of Luke Heefner to cut the lead to 4-1. After a stolen base and a walk, Ramsey got a flyout to end the Patriots’ scoring threat.

From there Ramsey would get out of another rough spot in the sixth and pitch a clean one-two-three seventh ending a quality outing for his sixth win of the year.

Dallas Baptist pulled back four runs in the final two inning off of David Falco and Lorusso in relief, however Maryland was well beyond reaching at that point.

After the Terps’ bullpen put the finishing touches on the win they flipped the script from Friday night picking up a resume win and setting up a rubber game with Dallas Baptist to decide the series winner.