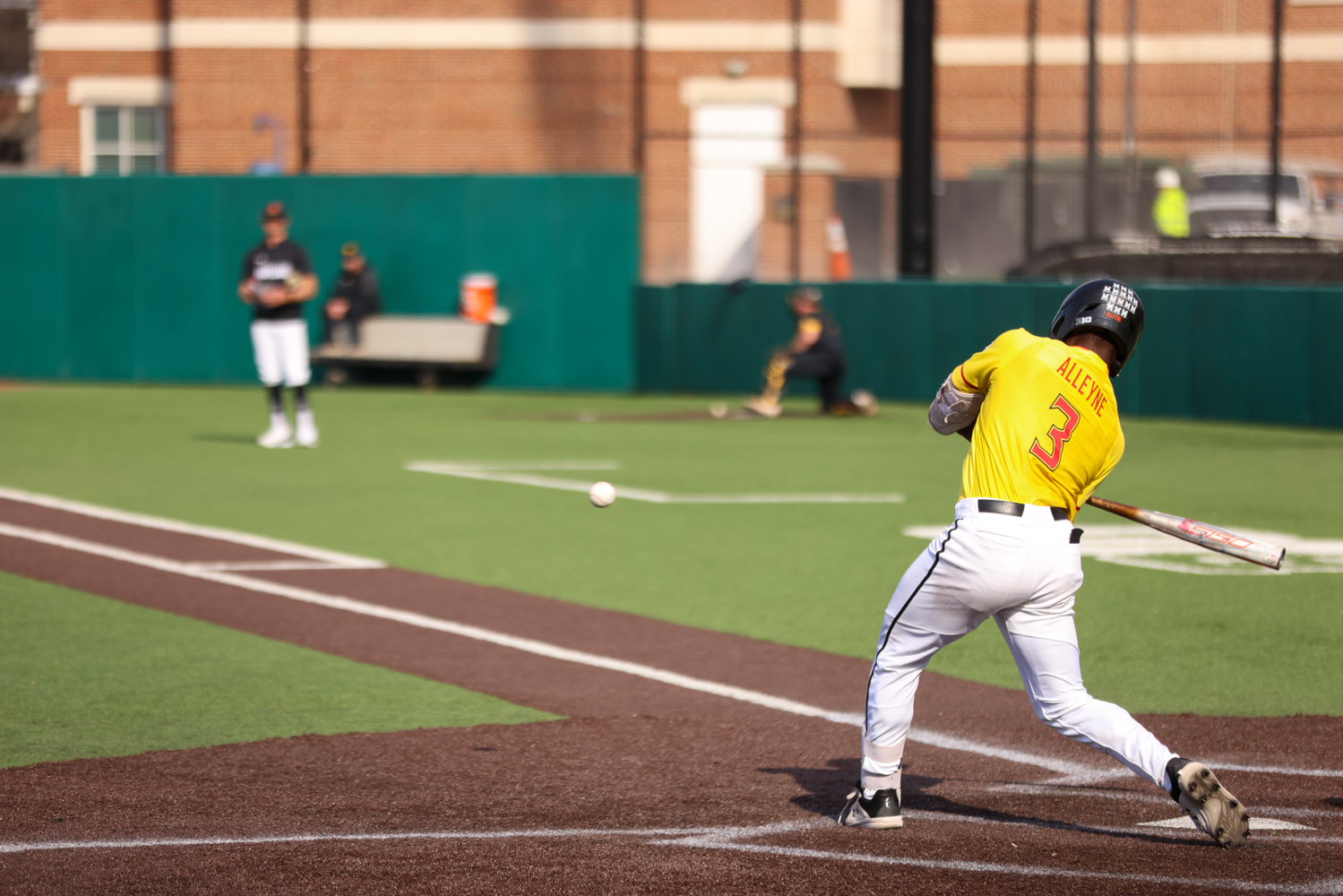 And at the last chance, the Terps got it.

Four runs kicked off by an RBI double blasted to center by Kevin Keister, Maryland hammered the nail into its 17th win.

Throttling the Retrievers off the back of a late rally, the Terps downed UMBC, 13-7.

Luke Shliger delivered an early blow to the Retrievers as he bashed a double to right. A batter later, Nick Lorusso returned the favor by crossing him on an RBI double. The yellow-clad Terps threatened further as they put runners on the corners with a Max Costes single-slap to right field.

Fortunately for UMBC, it cleaned up Maryland’s base runners with a double-play to snuff out the early chance.

The Terps jumped at the next chance to shove the Retrievers back onto their heels.

Cracking a long bomb in the second at-bat of the second inning, Bobby Zmarzlak reinvigorated the rally that UMBC had cut short.

A barrage of hits including an RBI triple from Keister and an RBI single from Shliger, piled onto Zmarzlak’s solo shot. Soon, it was 4-0, Maryland.

[Savacool strikes out 14 as Maryland baseball sweeps series with Siena, 19-2]

Starting pitcher Logan Ott kept the heat off the Terps’ bats in the early goings — he send nine out of his first 10 batters strolling to the dugout. His weak-contact style had worked through a trio of innings beautifully.

But as he climbed onto the hill for the fourth, his style’s effectiveness left the ballpark.

The Retrievers packed a pair of runners on-base and a fielder’s choice on the third at-bat scored one runner. More cracks led to Vaughn pulling Ott for Ryan Van Buren as an RBI single crossed another.

As the dust cleared, Maryland found its lead marginal. A trio of runs kept UMBC in steady striking distance for the tying blow at the end of the fourth.

Shortly before, the Retrievers pulled their starter for the third frame after he earned all of the Terps’ early lead. As UMBC’s new reliever settled in, Maryland struggled.

This made the Retrievers’ fourth inning rally that much more important. The momentum loaded on their side.

And then it toppled.

All it took was some plate discipline and other unconventional means to get it started. Shliger took his base to cycle a trio of runners to score one.

Then, Chris Alleyne cracked a fly ball to right and a pair of Terp runners took advantage, each touching home plate. Lorusso finished the rally off with an RBI single to make it a definitive 8-3 Maryland.

After the Terps added another run in the seventh inning, the drama continued into the bottom of that same frame. Ryan Van Buren lost his handle, allowing several runners to claim their base and set up another momentum shift.

And it would be on reliever Will Glock’s shoulders.

Glock registered an error that allowed a pair of runners to score and UMBC added another run off an RBI single later in the inning to make it 9-6, Terps.

But with Keister’s later heroics, Maryland supplied all the runs it needed to topple UMBC. In the bottom of the ninth, reliever Dave Falco finished the Retrievers off for the Terps’ fourth straight win.