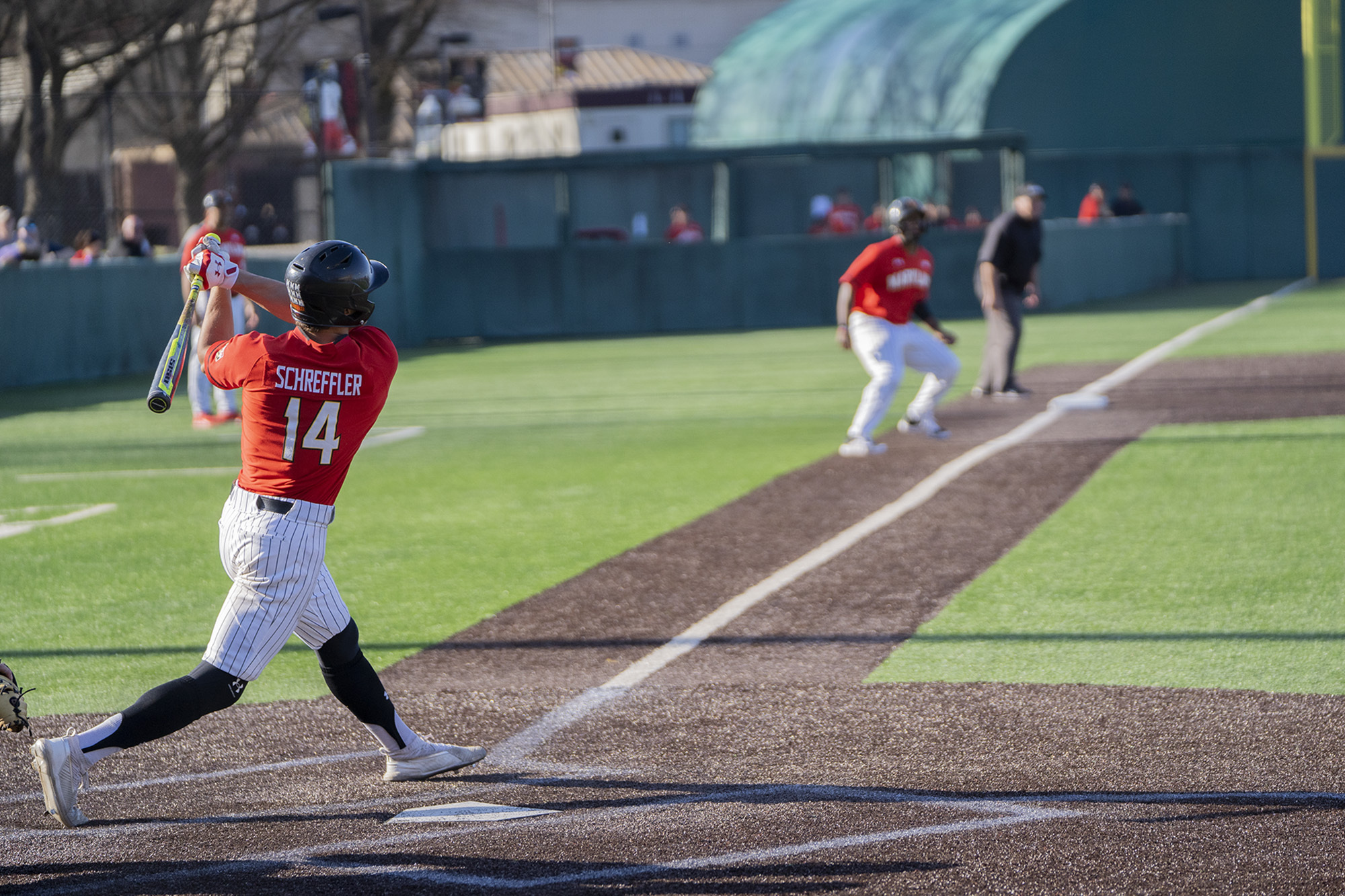 A tale of two games.

The first was an uncertain, cloudy performance that left No. 24 Maryland baseball scrambling until a powerful offensive inning set the tone for the rest of the way. The second was a dominant pitching performance that set very little doubt for the Terps’ victory from the start.

Both helped Maryland ride out of the day with a pair of wins.

The Terps swept the doubleheader off a powerful first-game hitting performance, 14-9, and a strong mound stint by Ryan Ramsey in game two, 7-0.

“We came out 2-0 [today],” coach Rob Vaughn said. “I thought offensively we were pretty good today. I thought Heine was great in the first [game] and Dean’s so good, [but] when you’re coming back from an injury your midweek routine’s different.”

Nick Dean grabbed the start on the mound for Maryland’s first game of the day as he made his return from injury.

And whether the injury lingered or Siena caught fire at just the right time, Dean underwhelmed.

The right-hander looked crisp as the contest began. In the first two innings, he registered six outs on the Saints’ first seven batters.

But as Dean wound up and delivered his first pitch of the third, the easy part of his outing ended.

Besides being Dean’s first allowed home run of the season, Livingston’s solo shot wasn’t that damaging on the scoreboard. But the rally that followed after Dean landed a pair of outs was.

[No. 24 Maryland baseball set for series with struggling Siena]

Siena landed a pair of runners on first and third. A slugged ground-ball danced along the third-base line — it eventually landed fair and scored a runner to tie the game at two. Then, a blast to deep-right landed and scored a pair of runs for the Saints and gave the 2-11 squad a two-run lead.

“Dean feels great … it’s more on us than it is him because you get your prize pony coming back and you’re like ‘Hey, don’t throw too many change-ups’ or ‘Make sure we’re not overdoing this here,” Vaughn said, “He’s a feel guy. He’s not a power pitcher.”

After retiring a pair of batters to start the fourth, the right-hander continued his two-out trouble.  Siena piled on another two runs off three hits to give the Saints a 6-2 advantage. Dean left the mound at the end of the fourth frame after racking up a career-high six earned runs and it seemed like Maryland could be upset by Siena.

But a storm brewed at the plate for the Terps. One hit after another in the fifth inning, Maryland poured on the Saints.

Maxwell Costes cranked an RBI double to the wall to break a two-inning cold streak for Maryland. Peppering the field, the Terps scored a run on five of their next six at-bats.

“We always know what our offense is capable of,” Chris Alleyne said. “Just never panic and put some good at-bats together, we’re never really out of the game.”

Capped off by a two-run blast by Alleyne, Maryland chipped away at Siena’s lead and overcame the Saints with a monstrous seven-run inning. Siena’s upset bid quickly sank out of sight as Sean Heine took over for Dean in the top of the fifth inning. The game stabilized afterward — for a while.

A homer in the sixth brought the Saints closer, but it didn’t matter. Troy Schreffler one-upped Siena with a final Maryland run to put them away.

Turning violently on a pitch trailing inside, Schreffler left the Saints’ outfielders looking skyward as his homer flew over the centerfield wall. At 12-7 in the sixth frame, Maryland wasn’t going to give up its lead without a fight.

And with the help of a pair of runs down the stretch and Will Glock closing the ninth, the Terps snatched their 14th win of the season from Siena’s grasp.

“I thought it was just really, really good at-bats,” Vaughn said. “Pass it on, hit, move him, hit a homer here and there. I thought it was a really pack-oriented approach … obviously you get that seven-spot and it all clicked for the rest of the day for us.”

Riding with Ryan Ramsey on the mound for the second game of the day, Maryland looked to clinch the weekend series over the Saints.

Siena was much quieter at the plate in its second outing.

Ramsey utilized his usual blistering fastball to throw a no-hitter through four frames before a slow grounder through the left gap couldn’t be corralled and dealt to first.

Meanwhile, Maryland piled on a trio of runs in the first two innings. Max Costes advanced Nick Lorusso and scored Alleyne on a fielder’s choice. An impactful Siena error on a successful bunt by Troy Schreffler scored Bobby Zmarlzlak and then Schreffler snuck home himself on a passed ball.

While not commanding on the plate, Maryland certainly held a firmer command on the Saints than it did in its result earlier in the day. Ramsey was a huge part of that, frustrating Siena to the tune of 11 punch-outs on the day as he finished a one-hitter performance in the sixth.

A cracked RBI single by Zmarzlak later that inning reinforced a slim but formidable lead for the Terps. Schreffler then added another off a sacrifice fly to make it 5-0, Maryland.

The Terps buried Siena with an additional two runs scored in the seventh frame. Alleyne homered and Zmarzlak scored Costes on a single. Noah Mrotek threw a stellar seventh with three punch-outs and Nigel Belgrave avoided disaster with two runners on in the eighth to set up one last inning.

Andrew Johnson took the mound and finished it, capping off a doubleheader sweep for Maryland.

“I was really happy with the way we came out and competed today,” Vaughn said. “Getting back to what we want to do and our brand of baseball, I thought was really good.”