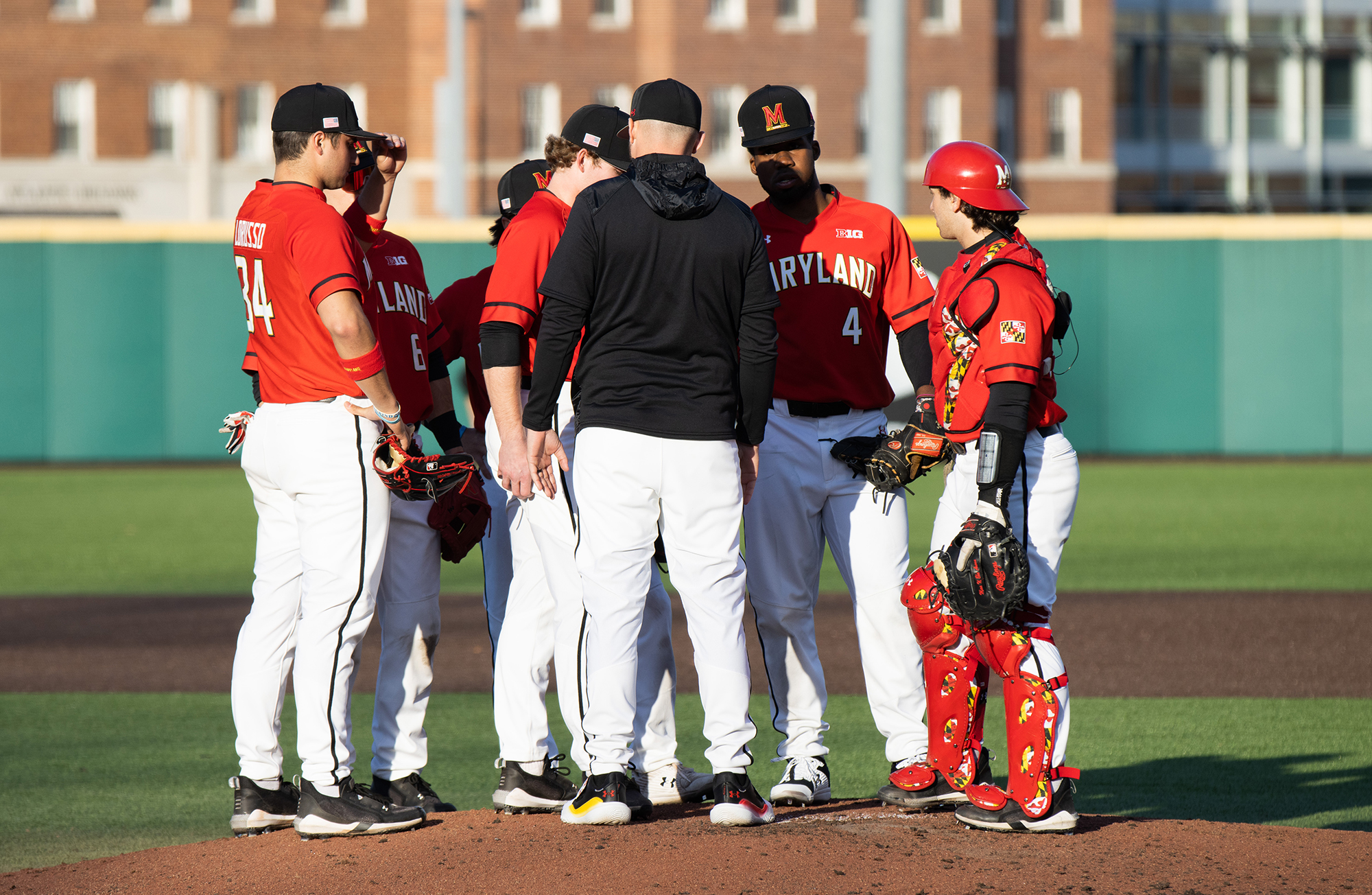 It looked decisive from the jump for Maryland baseball.

Taking a quick 3-0 lead, the Terps appeared as if they could roll over Delaware, just as they had done earlier in the season. But as the match wore on, momentum shifted over.

It crumbled slowly. Delaware took over. And the Blue Hens clinched the lead to the finish.

Stonewalled at the plate, Maryland couldn’t hold back Delaware’s offense and fell, 6-3.

“We weren’t very good,” coach Rob Vaughn said. “That’s the reality. When you look at, offensively, we didn’t have a base runner from the third inning through the ninth inning, you just don’t win on the road like that.”

Faced with their fifth game in seven days, Maryland looked to roll with Logan Ott on the mound and along with a new outfield alignment the Terps flashed the day before against Georgetown.

Tuesday’s contest placed Troy Schreffler in center, Zach Martin in right, and Bobby Zmarzlak in left along with putting Chris Alleyne exclusively as a designated hitter rather than his usual centerfield spot.

Whatever Maryland stood to gain from the change, it worked.

Ott saddled onto the mound and took his work in stride.

Throwing an efficient style that landed plenty of easy light-contact outs, Ott blew through the Blue Hens’ batting lineup on multiple occasions. He retired nine straight batters with just 35 pitches to give plenty of early allowances for the Terps’ offense.

“We planned on [Ott] going two innings today, so for him to extend one more and go three was huge for us to get them through the lineup,” Vaughn said. “It’s too dang early in the season to see us put [Ott] in a bad spot with his arm and I wasn’t going to do that.”

On an otherwise unremarkable day for Maryland at the plate, the second inning offered plenty of opportunities as Delaware’s Dan Frake went haywire on the mound.

Delaware native Kevin Keister started off the scoring with a sacrifice fly to score Zmarzlak and Alleyne grabbed a rare hit to advance another one home. As the Blue Hens switched pitchers, Nick Lorusso added one last run off a walk to cycle the bases.

As a consequence, with Ott taken off the mound at the start of the fourth, Delaware capitalized on the Terps’ lack of momentum.

“I think their guy did a nice job,” Vaughn said. “They threw a ton of change-ups and the guy had some funk to him, he had a weird lift, and the next guy they brought in had a really short weird arm action … felt like we couldn’t make that adjustment.”

Grabbing a walk and a single off Andrew Johnson, the Blue Hens snuck in a run off a fielding error by Matt Shaw to undermine Maryland’s lead. An inning later, Delaware smashed a homer to threaten the Terps further, bringing the score to 3-2.

The lack of production at the plate had come back to bite the Terps. It seemed all they could do is watch as numerous hits couldn’t find the right bounce or drop to land in base-hit territory.

So they relied on their bullpen.

And while it looked promising with Nick Robinson and Dave Falco making their season debuts on the mound, it wasn’t enough to hold back the Blue Hens.

“A lot of new guys [in the bullpen], Robinson and Falco had their first outings of the year,” Sean Heine said. “They’ll be fine as the season goes on but need to keep throwing strikes out of the [bullpen], make plays behind us.”

It appeared as if it was a matter of time before Delaware broke through. As Lorusso became the fifth Maryland pitcher to grace the mound, it came.

The Blue Hens’ Joey Loynd cracked a high-flying two-RBI homer to left, capturing the lead for Delaware in the decisive play.

Will Glock took the mound for the eighth with hopes the Terps could get a quick inning and stay close to Delaware. But, Glock lost control, walking several batters en route to the Blue Hens adding a pair of runs to give Maryland a three-run deficit for the ninth.

With 19 straight batters retired for the Terps since the second inning, their last shot in the ninth looked hopeless.

Out of nowhere, Maryland landed base runners to grant them a glimmer of hope. A trio of runners stood on the bases as Ian Petrutz took the plate and looked to crack a huge blow to Delaware’s hopes.

But the Terps’ hopes found themselves snuffed out again, as Petrutz punched out and landed their third loss of the season.

“I just don’t think [we were] good enough as a team,” Heine said. “Anytime you play someone on the road, you got to show up to play. We didn’t do that.”