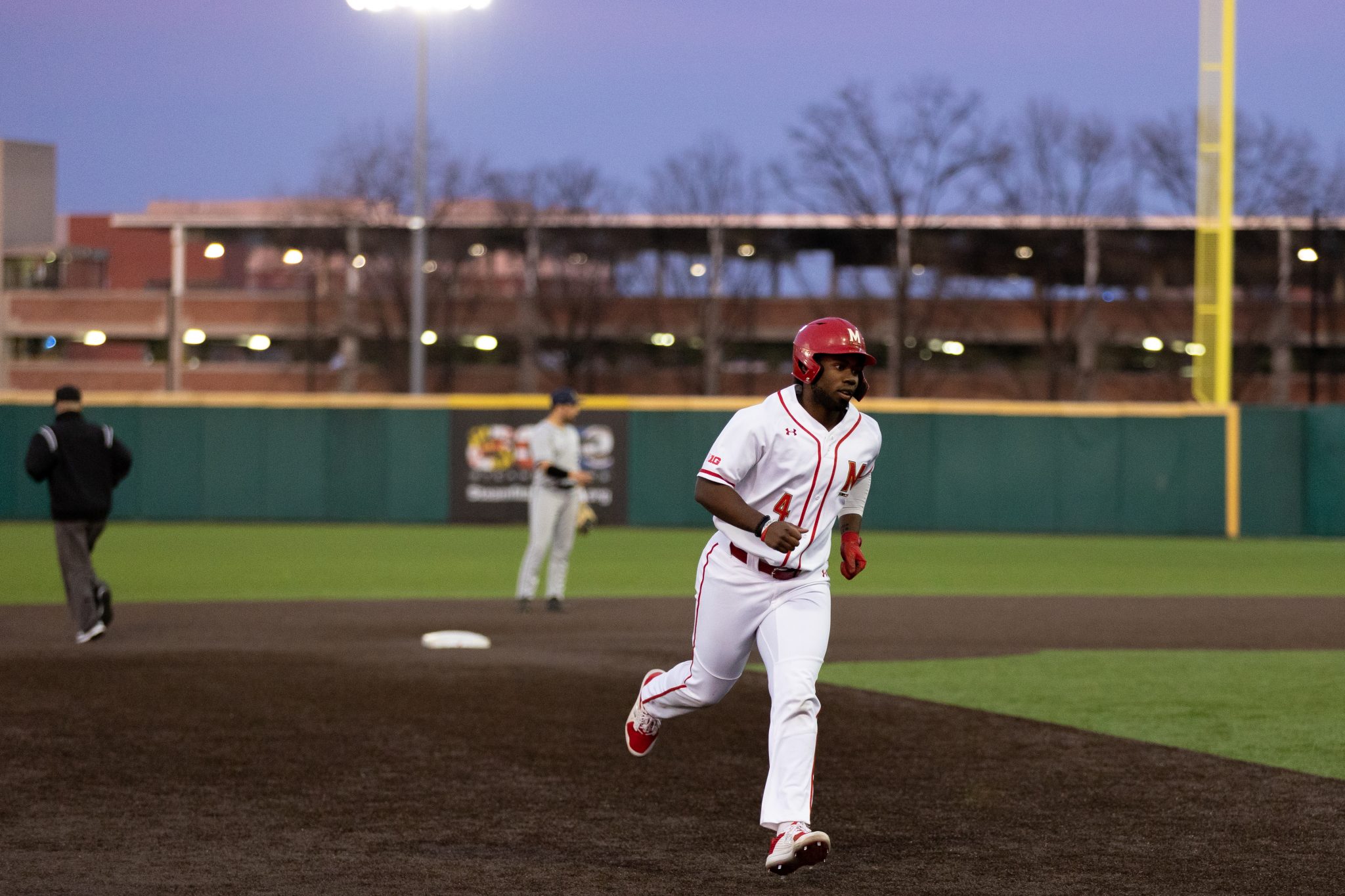 Max Costes jogs around the bases after hitting a home run during Maryland baseball's 5-1 win over Georgetown on March 14, 2022. (Cam Andrews/ The Diamondback)

Max Costes peered at Georgetown’s Matthew Sapienza, resting his bat on his shoulder with ready tension. Sapienza peeked at second and turned his head to fire a pitch towards home plate.

Costes picked up his bat and Sapienza launched his pitch over the plate. Dropping his shoulder, Costes throttled the baseball high into the air and well over the fence.

Skipping home, Costes’ shot in the bottom of the fifth proved fatal for the Hoyas in a largely defensive game.

Propelled by an extended outing by Jason Savacool and the two-RBI homer by Costes, Maryland baseball downed Georgetown, 5-1.

“Just a much better game than yesterday,” coach Rob Vaughn said. “I was a lot more happy with our focus, our effort, and how we went about our business.”

Threatened yet again by one of the stronger offensive teams in the country, Maryland baseball trotted Savacool out onto the mound to finish off its series against the Hoyas.

But outside of one notable early power hit, neither team found too much success at the plate.

Savacool utilized a blistering fastball and curve to create a variety of light-contact outs in the early-innings and kept his command.

“The slider for sure [was working tonight],” Savacool said. “I was throwing a lot of those and then eventually the change-up came on late, pitch wasn’t really working early on but I was able to get some big outs at the end because of the change-up.”

Even so, Georgetown’s Ubaldo Lopez smashed a high-hanging pitch for a solo homer in the second to change its hitting trend — but it wouldn’t last for the Hoyas.

Georgetown’s starting pitcher, Kyle Salley, would supply the majority of Maryland’s production at the plate in the early goings. Smattering balls across and below the lower-strike zone, Salley didn’t land many called strikes.

With patience and vision at the plate, the Terps took advantage.

A sacrifice fly by Jacob Orr crossed the previously-walked Bobby Zmarzlak in the second and a smashed line-drive to left in the third helped Chris Alleyne touch home after advancing a pair of bases off an error.

Nothing flashy, but it gave Maryland a 2-1 lead.

“I really liked the at-bats, even in the first [inning],” Vaughn said. “We’ve done what we’ve done all year… we’ve punched and given up a run [but] we respond right back.”

Georgetown snatched Salley off the mound in favor of Sapienza in the third, and both teams’ pitchers went to work.

Savacool collected nine strikeouts on the day as his efficient approach drove him deep into the game. Sapienza, while not better than Savacool, managed to keep the Hoyas tight with the Terps.

Rocketing a sky-high ball to left, Costes looked on as it carried and looped over the wall for a massive two-RBI homer in the fifth. Costes’ seventh homer of the year seemed the decisive shot Maryland would need to ride Savacool the rest of the way.

“Definitely a lot better [at the plate],” Nick Lorusso said. “Yesterday, we gave away too many at-bats, today, we did a good job putting the ball in the play, putting pressure on the defense and that ultimately turns into runs.”

The seventh brought a pair of spectacular plays for the Terps to help close the matchup out.

With a runner on third, Troy Schreffler spied a line-drive to center, sprinted forward, and made a diving catch from the outfield to rob the Hoyas of a crucial run.

Not too long after, Lorusso smashed a solo homer to left-center to inflate the Terps’ lead that much more. With nothing else from Maryland at the plate, it was Savacool’s last inning to shine as his pitch count ran high.

“It’s incredibly hard to [go deep into the pitch count], especially of his caliber, he’s throwing hard every pitch,” Lorusso said. “It really takes a toll on you but he’s a guy that pitches with efficiency and it helped out our bullpen today with games coming up.”

Still, the fastball spun and throttled past batters. He punched three of his last four batters out to give the Hoyas only one more shot at a comeback.

Sean Heine relieved Savacool in the final frame in hopes of capturing Maryland’s 13th win. Punching two batters and catching light contact for another out, Heine finished Georgetown off.

“We needed that start from [Savacool] especially with a game tomorrow on the road against a good Delaware team,” Vaughn said. “We needed some depth out of our starting pitching.”