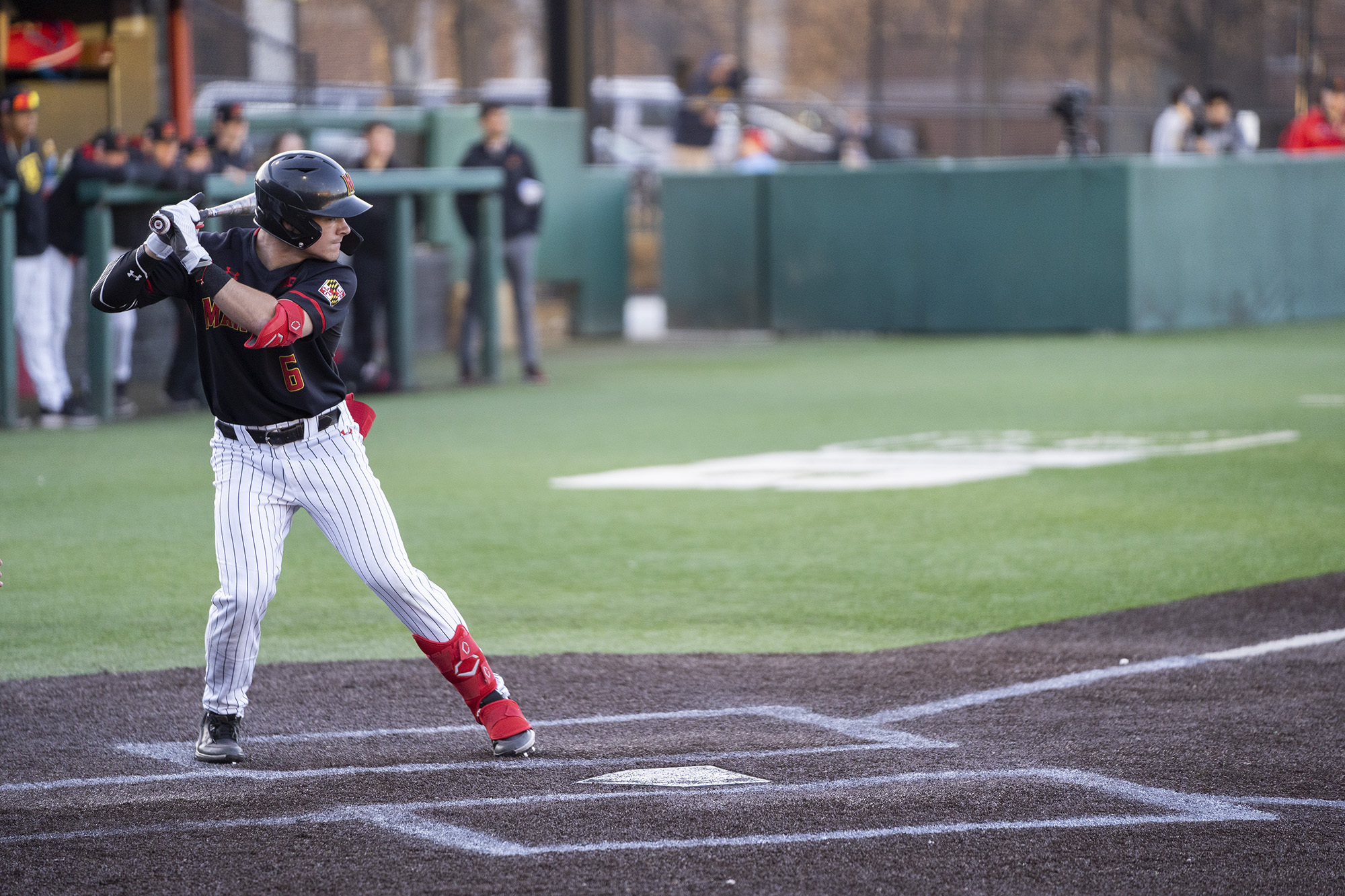 After falling behind to Georgetown most of the game, Maryland baseball had a do-or-die shot in the bottom of the ninth.

One runner took their base. And then Matt Shaw took things into his own hands. Rocketing a homer to far-right, Shaw walked off the Hoyas in dramatic fashion as his teammates swarmed him at the end of his trot.

“I just wanted to sit back a little more [going into the final at-bat], I could feel myself moving forward,” Shaw said. “Then, just visualizing something good to happen, picturing hitting the ball good, and it worked out.”

Victimizing starting pitcher Logan Ott on the first pitch of the game, Georgetown’s Jake Hyde smashed a moonshot over the top of the centerfield wall to set the tone for the Hoyas early.

But despite the slug, Ott bounced back to finish the first cleanly. And Maryland responded.

Using home runs from Chris Alleyne and a two-RBI shot by Max Costes, the Terps quickly enforced a 3-1 lead against the Hoyas.

It wouldn’t be long before Georgetown struck against the Terps once again. Or rather, the Hoyas’ Andrew Ciufo would.

Absolutely launching a ball well beyond the left-field fence, Ciufo trotted around the bases with several of his teammates as he wrapped up a grand slam for Georgetown.

“It’s no secret that [Ott’s] fastball is [not] going to blow your doors off, when he doesn’t command the secondary stuff, it’s tough,” coach Rob Vaughn said. “They did a great job of ambushing fastballs.”

A dejected Bobby Zmarzlak walked back from the left-field boundary as Maryland found itself in a deficit the Hoyas wouldn’t soon relieve.

Pitching problems weren’t over for the Terps just yet.

After Ciufo’s shot ended Ott’s stint on the mound and Sean Heine cleaned up, Ryan Van Buren received his own taste of the Hoyas’ power.

A high fly-ball to left carried further and further until it crossed the fence for a monster three-RBI score for Georgetown. With the carousel of Terps’ pitchers growing longer, the game looked out of reach.

“They’re good, man,” Vaughn said. “If you can’t command your secondary stuff, those guys really attack heaters and did a great job with it.”

But with a steady-enough pair of innings from Matt Orlando on the mound, Maryland clawed its way back. Even despite another homer, this one solo, by the Hoyas in the sixth, the momentum had shifted.

The shift quickly came to fruition as Nick Lorusso took the mound and evacuated Georgetown to the dugout for Maryland to come up to bat in the seventh.

“I didn’t know exactly when I was going to pitch but I had an idea,” Lorusso said. “The approach was to attack them and trust the defense behind me to make plays and that’s exactly what happened.”

Then, the Hoyas found their way into the pitching blues.

Quickly loading the bases, the Terps crossed Drew Grace off a fielder’s choice to make it a 9-6 game. Max Costes walked to load the bases again. And Zmarzlak took the plate.

He changed the game in one swing.

Cracking a piercing line-drive to the left-field gap, Maryland crossed a pair of runners in a crucial moment for the Terps. After falling behind due to Georgetown’s power at the plate, Maryland had found its way back.

“That was the point in the game where there was definitely momentum on Georgetown’s side,” Shaw said. “For him to get that hit and get a few RBIs was huge going into the last couple of innings.”

Just one run down heading into the ninth, tensions rose high as Lorusso did his job to give Vaughn’s squad a shot at a walk-off.

And that’s exactly what they did.

Finding the right pitch, Shaw drove himself and Alleyne home to triumph over the Hoyas at the last second.

“How cool is it that Matt Shaw [hits the walk-off],” Vaughn said. “He’s our best player and it’s not even close…and he’s just been scuffling a little bit.”