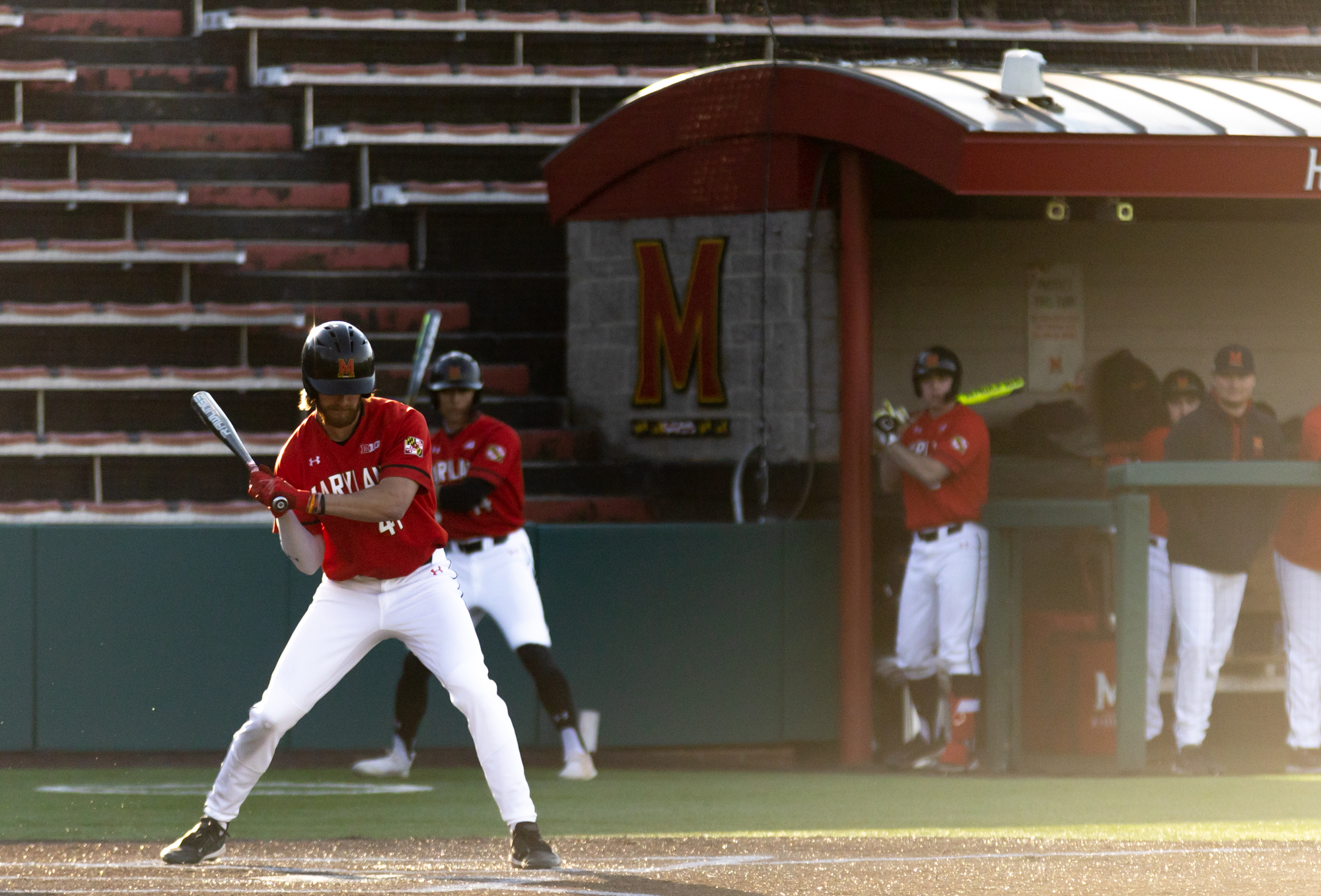 With a 2-1 count in the first inning, Bobby Zmarzlak squared up and put his bat parallel to the ground. The pitch clinked off the bat and meandered down the grass next to the third base line.

Chris Alleyne crossed home. Nick Lorusso went for second. And the ball found a sudden drift in the wrong direction after looking perfectly on course for the Terps.

It went foul. Zmarzlak later struck out — Maryland stranded Alleyne after and missed out on a situation with two runners on base and only one out.

East Carolina tried something similar the next inning. With a runner on and no outs, the Pirates laid an uncertain bunt down the same line. The ball drifted foul, then suddenly changed course at the last moment to land fair.

Runners graced first and second, and the leading runner went on and score the Pirates’ first run. East Carolina used the run as a springboard for the next inning’s breakout on offense, and they never looked back.

“That’s baseball, right?” coach Rob Vaughn said. “We didn’t get some things [to] bounce our way.”

Bad luck. Or as a former East Carolina player had told Maryland hitting coach Matt Swope, the “ghosts at LeClair.”

The two plays summed up the weekend for Maryland. Small things haunted the Terps and paved the way for larger plays. In this case, it was leaving runners on base. Nineteen runners were left on base in the Terps’ losses at the LeClair Classic.

While not quite as big of a factor in their first loss of the season against Michigan, the statistic made the difference in consecutive games.

An obvious contributor to that was a paltry .171 combined batting average with runners on base in their two losses while their opponents managed a solid .290.

Not only that, but Maryland’s vaunted pitching trio finally found their flaws on the mound over the weekend. All three starters earned more runs than their averages and forced the offense to carry the Terps for the first time.

While the “ghosts at LeClair” didn’t help Vaughn’s squad find its timing at the plate — the weekend did provide tells that Maryland will have to up its game on the offensive end to hit its stride again.

Tuesday’s win over VCU provided plenty of optimism at the plate, if it was ever lost.

The Terps cracked four homers and upped their runners-on batting average to .364 for the much-improved 8-6 win that was void of their usual stellar pitching.

“I think it’s been a long time coming, seeing the home run numbers down for us a little bit this year,” Alleyne said. “Just keeping quality at-bats up and home runs will come. I think today is a coming out party for the rest of the season.”

One player that looks to figure into that equation more this season is Troy Schreffler. The junior outfielder leads the team in hits and on-base percentage and has taken strides at the plate. In 12 games, Schreffler has almost equaled his hit count from last season and is already even with his RBI count.

With Lorusso and Jacob Orr already shining at the plate as new additions, Schreffler could provide the extra spark needed for Maryland to be a top offense in the Big Ten.

“Just relax and stop putting pressure on myself,” Schreffler said. “I think that’s the biggest thing. Summer ball, I was able to go there and get a lot of reps and get a lot of at-bats and being able to do so, I found out a lot about myself and I’m able to relax.”

Maryland will face Georgetown in a weekend series sandwiched with a home game against Cornell in-between. The Hoyas look to be the primary opponent over the weekend as they have managed 19 homers in 12 games played so far.

Jake Hyde will lead Georgetown at the plate, the sophomore already has 24 hits through 12 games and leads them in OPS and on-base percentage. On the mound, Georgetown has a 5.38 average ERA with starters Nolan McCarthy and Matthew Sapienza sporting a 4.30 and 3.38 ERAs, respectively.

Indeed, the 8-4 Hoyas present yet another quality shot at advancing Maryland’s notoriety and will provide more clues for the season to come. Given the presumed absence of haunting activity elsewhere, Vaughn’s squad will look to start another streak on the season.